What’s happening in Bay Area cinema this week? You can talk about American Splendor (the movie, not the nation’s condition). You can see The Naked Gun or Independence Day at the drive-in. You can stream Shiva Baby, Blood Simple, and The Story of a Three Day Pass. And best of all, you can catch Donnie Darko or The Room in real movie theaters.

The Film: Directors Shari Springer Berman and Robert Pulcini mix biopic and documentary methods to tell the story of Harvey Pekar, a frustrated, angry, and intelligent man who found modest fame but little fortune as the writer of a series of biographic comic books. For most of the film, Paul Giamatti and Hope Davis play Pekar and wife, but the real Pekars also appear in the film, comparing the actual events with their cinematic recreations.
The event: First, watch the movie. Then join the Zoom discussion Saturday at 3:00.

I liked the Naked Gun movies of the 1980s and ’90s, but I haven’t seen any in a long time. These flicks were silly, ridiculous, off-the-wall, and usually very funny. Not surprisingly, from the makers of Airplane. 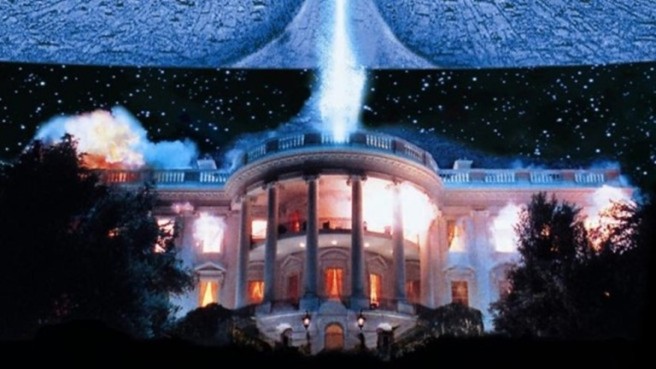 I loved this brainless science fiction extravaganza when it opened in 1996, but that was too long ago for me to give it a grade now. Aside from the impressive explosions and other special effects, it was funny and didn’t take itself seriously. It made Will Smith, at least for a few years, the star you could depend on to save the world. Also, one of the three main heroes was Jewish (Jeff Goldblum); something you rarely get to see in action movies. Women, on the other hand, only got supporting roles.

A young, Jewish woman secretly doing sex work goes to a shiva meal which turns into a nightmare. Her high school girlfriend wants to rekindle the relationship. Her overbearing mother drives her crazy. She loses her smartphone. Everyone asks about her future plans. And worst of all, her – let’s say, client – arrives with his trophy wife. Shiva Baby turns out to be a less funny but a more insightful comedy than the setup suggests.

How many alienated-teenager-in-suburbia-time-travel-science-fantasy comedies can you name? Okay, there’s Back to the Future and its sequels, but add the adjectives horrific and surreal to that description, and Donnie Darko stands alone. And how many alienated movie teenagers must deal with a slick self-help guru and a six-foot rabbit named Frank (think Harvey, only vicious). It’s not entirely clear what’s going on in this strange movie, but that just adds to the fun.

The Coen Brothers’ first film shows a promise of what they’d become. An exceptionally dark, violent, gruesome, and funny noir, it tells a story that is totally incoherent to the characters onscreen, but completely logical to the audience. You’ve got an adulterous couple (half of which is Frances McDormand in her first movie role), a violently vengeful husband (Dan Hedaya), and a private detective with less morals than your average snake (M. Emmet Walsh).