Last Friday night, my wife and I watched the 1954 version of A Star is Born – the one starring Judy 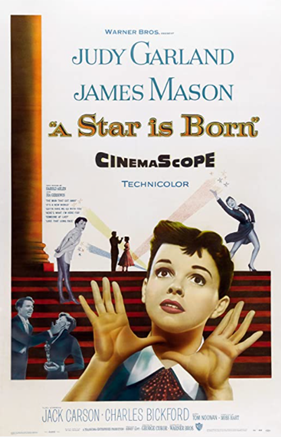 Garland and James Mason. Aside from being almost perfect, this film catches Hollywood at an important moment in film history. The film industry was experiencing its biggest changes since the talkie revolution. And you can see these changes not only because the movies looked different. But also because it’s a film about Hollywood and these were built into the story.

This is the second of four films with this title, and all use the same basic story: A young, struggling performer gets a shot at the big time when a handsome star falls for her. She becomes famous, they marry, but he drinks too much, setting up the story for tragedy.

This is the first Star is Born made as a musical. But it’s not like the sort of musicals Garland was used to making. It’s a realistic story, and a realistic musical. Characters only break into song and dance when they’re rehearsing or performing. In fact, the joyful songs in the films-within-the-film play a strange counterpoint to the serious story, reminding us of the artifice of Hollywood make-believe. I give the film an A.

Consider the song Lost That Long Face. It’s one of those absurdly happy, big budget sing-and-dance numbers that were common in movie musicals in those days. We see it from the filmmakers’ point of view. She dances and beams with joy. Soon, she’s in her dressing room, where she’s deeply worried about her sinking husband. Then she goes back to the soundstage, the jaunty music comes up, and again she beams that glowing smile.

I can’t call myself a Judy Garland fan, but I’ve seen several of her movies and consider her a great talent. But if she gave a better performance than this one, I haven’t seen it. Whether she’s singing, dancing, or acting, she’s always perfect.

So, what about Hollywood changing? Several times in the movie, studio executives talk about shrinking ticket sales. That was actually happening when the film was being made. A new gadget called television, along with a baby boom, was keeping people at home. One way to bring people back to theaters was to use special, widescreen formats. A Star is Born was one of the first Warner Brothers films to use the popular CinemaScope format. Strangely, no one in the movie talks about these formats, even though they were on the posters.

In 1983, preservationist Ronald Haver restored the film. About eight minutes were lost for good, although the soundtrack survived in tact. That’s why, when you watch the film, the movie suddenly turns into a slideshow with sound.

There’s a sad irony built into this film. James Mason’s character was a self-destructive alcoholic. But it was Judy Garland who would destroy herself.