Perhaps that’s why the movie rambles a bit, jumping months and years and leaving us to figure out what happened in between. And through the rambling, you get to know these two life-long best friends.

For the rest of this review, I’ll use the last names Covino and Marvin for the filmmakers, and the first names Kyle and Mike for the characters they play.

Although Kyle and Mike are the best of friends, I can’t imagine why Kyle would want to spend a lot of time with Mike. In the very first scene, Mike admits that he’s been having sex with Kyle’s fiancée. Before long, Mike gets into a fight with a total stranger and winds up in the hospital. Mike repeatedly messes up.

And I mean seriously messes up. In a Thanksgiving dinner with Kyle’s extended family, Mike arrives drunk and falls flat down on the floor, making a miss of everything. On New Year’s Eve, he makes a very sloppy hit on Kyle’s fiancée (a different fiancée than the I mentioned earlier). 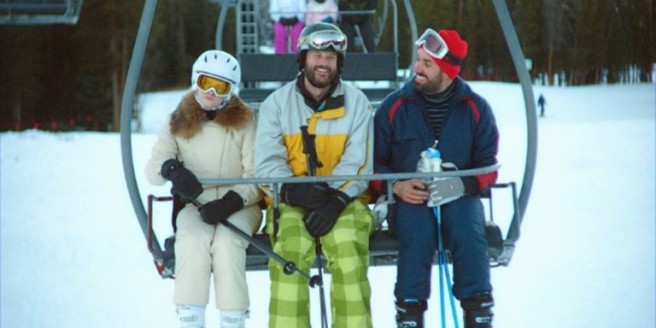 It takes a while to get to know these two, and to a large degree, we don’t know them at all. For instance, we never find out what Kyle does for a living. We do get to see Mike working, but it’s not the sort of job people keep. The two also change physically. Early on, Mike is fit and Kyle is heavy. Then, years later, Kyle is heavy and Mike is fit.

Covino and Marvin chose a very formal structure for their story, cutting up their script into seven numbered chapters. Some chapters are set only weeks after the previous one; others are years apart. Some of the chapters end with a musical interlude with people we haven’t seen before breaking into song.

Cinematographer Zach Kuperstein seems to love long, moving camera shots. The opening shot has Kyle and Mike biking up a stiff, uphill grade as they talk. Strangely, while their leg muscles were clearly working hard, the camera position made it look like they’re biking downhill. Another chapter is shot entirely (I think) in one shot as the camera glides through a large house and the front yard.

Overall, you can easily get caught in Kyle and Mike’s friendship and come to care about them.

It appears that The Climb will actually open theatrically Friday, November 13, at the Embarcadero Center and the Shattuck – if you’re willing to dare go to the cinema.