Did you sign up for Disney+ to watch Hamilton? I did and I loved it. I’d seen the play live a few months ago, but I liked it much better on the screen, where I could watch the facial expressions and read the closed captions. The question is: Will I continue with Disney+.

Anyway, here are three movies I saw even though no one asked me to watch them.

By the time this Disney animated feature came out, my kids could go to the movies by themselves, and therefore I missed a real treat. Yes, it follows the conventional formula for Disney animated features – with a fairyland princess, a handsome hunk, songs, and adorable animals. But this time, you’ve got two princesses, one becoming queen, both basically good but with a sibling rivalry that could destroy the kingdom. And you don’t know which handsome hunk will marry the ingenue we really care about. It’s also beautiful to look at.

Buster Keaton’s last silent film contains three great comic sequences: Buster trying to put on a theatrical beard, Buster messing up a stage performance, and, in one of his greatest routines, Buster trying to get a beautiful but very drunk woman into bed. Otherwise, it’s a pretty good movie hurt by an unlikeable ingénue. Coming at the end of the silent era, Spite Marriage was released with a recorded musical score and some truly awful sound effects. I suspect I would have enjoyed it much more with the Mont Alto Motion Picture Orchestra, who have their own score.

And yes, the Blu-ray is named for the other feature on the disc – Keaton’s last masterpiece, The Cameraman. 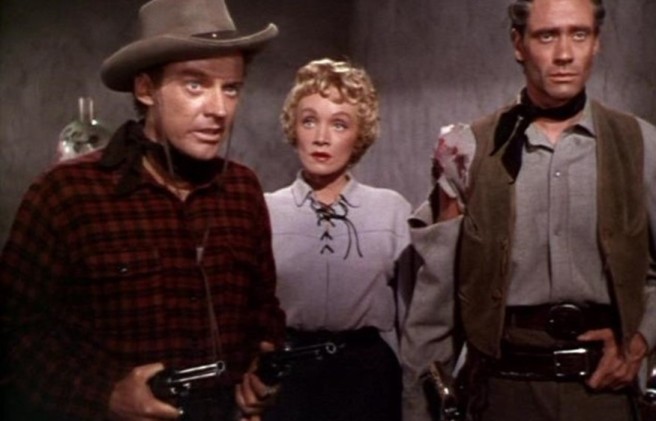 I expected something interesting in a western directed by Fritz Lang – especially when it’s part of a Criterion Channel collection called Western Noir. But my expectations were dashed. The murder of a young woman sets her fiancé on a search for revenge, and the only way to find the killer is to become a criminal himself. The story is a mess, but there are a few interesting scenes, especially those with Marlene Dietrich and Mel Ferrer.