While Ray Harryhausen was making effects-laden fantasies in the mid-20th century, the Czech filmmaker Karel Zeman was doing much the

same thing behind the Iron Curtain…but with a better sense of humor. Using stop-motion animation, puppets, live action, beautiful illustrations, and a sense of comedy, he made visually striking, entertaining films that have been forgotten in America.

That’s getting fixed. Last month Criterion released the Blu-ray package Three Fantastic Journeys by Karel Zeman, containing three feature films, several shorts, and many documentaries. It also includes magic, joy, humor, and some of the most striking and impossible images that can only be seen in a movie. Two of the three make no attempt at realism, with live actors performing through two-dimensional illustrations and outrageous animation.

Such beautiful and imaginative pictures force you to reconsider your belief that foreign-language films must always be subtitled and never dubbed. After all, when a dancer and a cluster of grapes move together in sync, why would you want to look at the bottom of the screen? All three films had English-dubbed releases in the 1950s and ’60s. Unfortunately, only two of the three movies in this package have English-dubbed options. 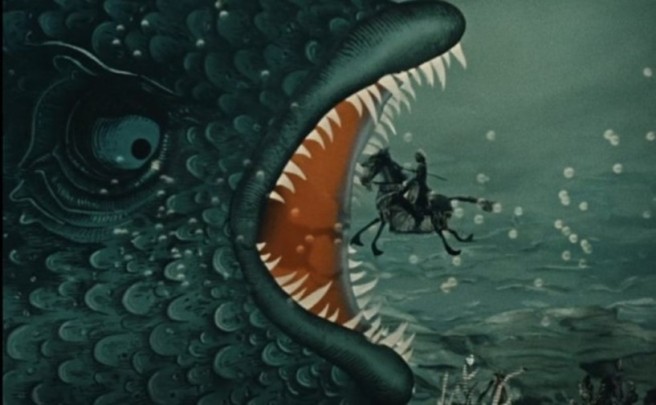 So, let’s get to the movies:

Four boys take a river trip back in time. As they travel, they first see wooly mammoths and then dinosaurs, until they reach the ocean in which life began. They have adventures and get in and out of trouble.

This is the only photo-realistic film of the three. The backgrounds are real – or at least realistic. The effects try – and sometimes succeed – in making you believe you’re watching real dinosaurs. This was clearly made for children, and sometimes feels like an educational picture. 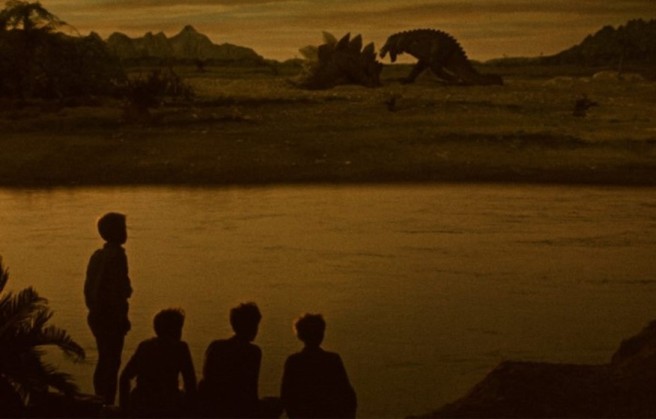 Along with Zeman’s original, the disc includes the dubbed, considerably altered American version – which I saw ages ago as a child. Aside from the dubbing, the American distributors tacked on a new prologue and epilogue, which places these boys as New Yorkers. Their faces don’t appear in these added sequences, because the original child actors were five years older than when the real film was made, and because they were on the other side of the Iron Curtain.

Although set in the 19th century, and based on several works of Jules Verne, Invention for Destruction clearly shows the concerns of its Cold War origins. Evil pirates kidnap a brilliant but overly trusting scientist to help them create what is clearly an atomic bomb. A dashing young hero and a beautiful damsel save everyone.

Zeman loved Verne; you’ll find references to the French novelist in many of his films. But more than the others, Invention feels like an homage to the author. In fact, when it was originally released in America, it was titled The Fabulous World of Jules Verne. The disc contains both the original Czech soundtrack with English subtitles, and the English-dubbed track from the American release.

You’ve probably never seen a feature film that looked like this one – unless it was another Zeman movie. Shot in black and white, it uses live actors within two-dimensional, drawn backgrounds, with various forms of animation. Parallel lines make the backgrounds look like engravings. And with the 19th-century airships and submarines, this is steampunk to the core. It’s just a feast to watch.

It’s been called “The most successful Czech film in history,” but such claims are difficult to prove.

Rudolf Erich Raspe’s tongue-and-cheek Baron Munchausen stories are little known in America, but have been popular in Europe for two centuries. In these tall tales, the Baron goes to the moon, rides on a cannonball, and is swallowed by a giant fish – and always comes out triumphant. For his version of the story, Zeman combined black and white live action, limited animation, puppets, and many ways of adding color. The story, narrated by the Baron, involves a 20th-century astronaut, a damsel in distress (who’s much smarter than either of her two male saviors), a love triangle, broad slapstick, and several battles.

It’s not easy to turn a collection of short comic stories into a coherent whole. Zeman and his screenwriting collaborators did an excellent job, concentrating on freeing the damsel in distress.

This is my favorite Zeman movie, and between these three, it’s clearly the best and the funniest. Verbally, the Baron tells us happily that the sea he has just fallen into is of white wine “chilled just right.” Visually, he manages to be the gallant gentleman even with his foot stuck in a window.

This is the only feature film in this package without an English-dubbed option. I’ve seen the movie dubbed, and with its little dialog and considerable narration, it didn’t hurt the film at all. With a picture so visually exciting, who wants to look at the subtitles? The lack of an English-language option was by far the biggest disappointment in this whole three-disc set.

For more information about the character, read A Tale of Two Munchausens.

You’ll know you have something special when you open the box. It’s a sort of pop-up book illustrating the movies. I couldn’t capture the spirit in a photo, so here’s my video:

On the other hand, instead of the usual booklet found in Criterion packages, Three Fantastic Journeys by Karel Zeman has only a one-piece paper foldout with an informative but rambling article by Michael Atkinson. The text is so tiny it’s a chore to read. Thankfully, you can read it online.

All three films were digitally restored at 4K and pillarboxed to their original 1.37×1 aspect ratio. That ratio was pretty much dead in the West when Destruction and Munchausen were made, but was still used in Eastern Europe.

Journey to the Beginning of Time, the most conventionally visual of the three, looks fine, but not exceptional. It was made at a time when color film was rare in Eastern Europe, and it’s likely faded beyond help. Destruction and Munchausen look exceptional. Their strange images are sharp and clear.

All of these films have mono soundtracks. The original Czech soundtracks are uncompressed LPCM mono. No complaints. The English-dubbed tracks are in lossy compressed Dolby Digital, which isn’t quite as good, but they’re still fine.

On the Journey to the Beginning of Time disc:

On the Invention for Destruction disc:

On The Fabulous Baron Munchausen disc: 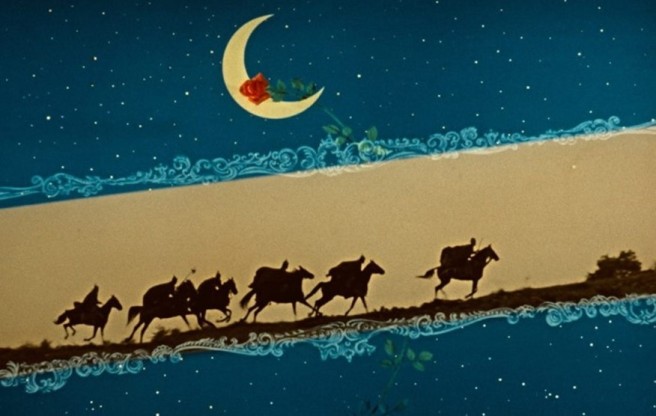