You’d expect a major film festival in the South Bay to celebrate technology as well as movies. And that’s what you get at Cinequest. Yes, like other Red Carpet Festivals, Cinequest showcases plenty of films that have not yet been seen in the Bay Area, with filmmakers in attendance. But it also showcases new (and old) technologies.

This year, Cinequest will screen 321 films and other entertainments. These include 154 World and US premiere films – including 122 directed by women.

Cinequest runs from March 3 to 15 in San Jose and Redwood City.

The festival starts with John Pinette: You Go Now, a documentary on the late comedian. It closes with another film about a comic genius: Marcel Marceau. But no, that last film, Resistance, is not a documentary. It’s a narrative thriller starring Jesse Eisenberg, following the future mime in his dangerous anti-Nazi work in the French resistance. 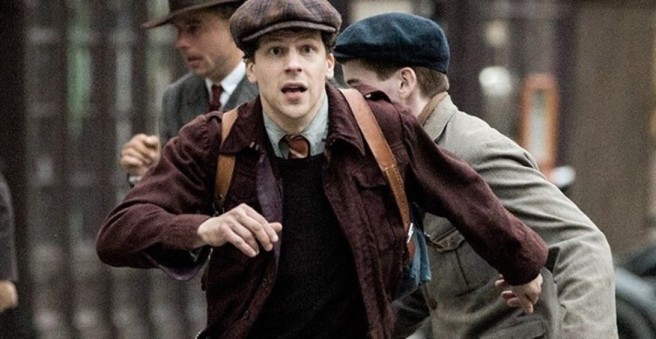 Cinequest isn’t just about films. It also celebrates the latest Virtual Reality and Augmented Reality offerings. In San Jose’s California Theatre’s Rehearsal Hall, you can experience climbing Everest, racing sailboats, and a dystopian nightmare in ways that can’t be done on the big screen. You can also glide among the Canadian Rockies or fly to Mars and beyond.

Then you can cross the street (careful; cars are real reality) to the KALEID Gallery where you can interact with more virtual realities – including one based on Dr. Who.

The festival also celebrates the cinematic virtual reality of 1968 with a screening of Stanley Kubrick’s masterpiece, 2001: A Space Odyssey. Stanley Kubrick’s visualization of Arthur C. Clarke’s imagination tells you little, but it shows you a great deal. Unlike any other science fiction movie (or any other big-budget blockbuster), it offers a daring story structure, striking visuals, breathtaking use of music, and a refusal to explain what it’s all about. As prophesy, 2001 fails. But as fantasy, adventure, mystery, and even theology, it’s brilliant. I give 2001 an A+.

The film was originally intended to be screened in Cinerama, which by 1968 meant a 70mm print projected onto a giant, deeply curved screen. It really felt like it was putting you into space. The festival will screen 2001 in 70mm, but on a flat screen. Read my report and my Eat Drink Film article on how it should best be shown.

Cinequest always has a night of silent film. A hundred years ago, movie star and producer Douglas Fairbanks bought the rights to a then-new serialized novel, projected his already-famous athletic comic hero into a romanticized past, grabbed a sword, and, with The Mark of Zorro,
invented the movie swashbuckler. There are better swashbucklers, better Zorro movies, and better Fairbanks vehicles (the sequel, Don Q, Son of Zorro, is all of these), but no other catches the birth of a genre. I give it a B+.

The Mark of Zorro

The feature will be preceded by one of Buster Keaton’s best shorts, One Week. If you can’t laugh at this film, you’re probably dead.

Both films will be accompanied live by Dennis James on the mighty Wurlitzer Organ.

As I write this, I haven’t seen any of the new films on the schedule. But these ones seem interesting.