Filmmaker Matt Tyrnauer makes a strong argument. His documentary, Where’s My Roy Cohn?, suggests that if it were not for the famous lawyer, our country wouldn’t be in such a mess. I’m not entirely convinced, but Cohn was certainly a major part of the problem.

A malicious genius if there ever was one, Roy Cohn influenced America over four decades – destroying careers and lives, protecting crooks, turning elections, enjoying the media spotlight, and denouncing people as Communists or homosexuals. He was, as one of the film’s interviewees describes him, the “ultimate self-hating Jew.” He was also a self-hating gay.

Like most people, his family made him what he was. He was born rich and raised to care only for a few relatives and friends. Roy clearly got his sociopathic tendencies from his doting mother. One Passover, the housekeeper died in the kitchen. Mom hid the body so that the tragedy wouldn’t ruin the evening.

Cohn first felt the spotlight in his early 20s, for prosecuting Julius and Ethel Rosenberg’s trial for treason (they allegedly passed secret information to the Russians). While the trial was going on, Cohn talked about the case with the judge outside of court – a major breach of ethics. Both husband and wife were executed. According to this documentary, there was no real evidence against Ethel Rosenberg.

But Cohn truly became famous as Joseph McCarthy’s chief counsel during the Senator’s Anti-Communist witch hunts. The image of McCarthy and Cohn seated together, talking privately as they destroyed lives and careers, has been seared into American history. Along with J. Edgar Hoover, they hunted not only for Communists in the government, but for homosexuals as well. Yes, the hypocrisy was thick. 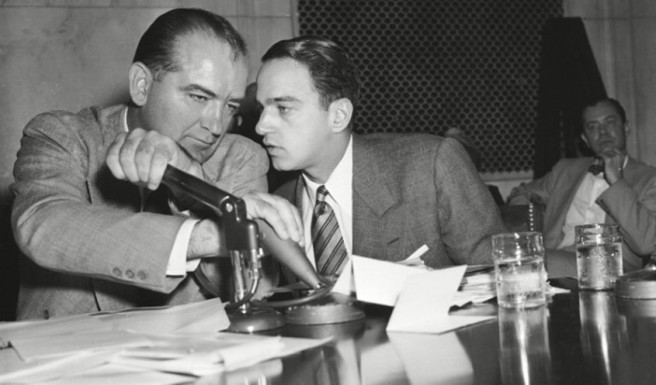 After Joseph Welch destroyed McCarthy with his famous “Have you no sense of decency?” speech, Cohn became a top New York lawyer. His vicious attacks and refusal to back down under any conditions made him a fortune.

Cohn knew how to manipulate the press and became a top-flight celebrity. He got in the gossip columns, many of which simply printed what he dictated. He soon became a top mafia lawyer. The documentary describes a case where he got a hitman’s sentence from execution to a two-year sentence.

Mixing with the mob didn’t stop politicians from courting Cohn. Tyrnauer suggests that he helped both Nixon and Reagan to get elected. 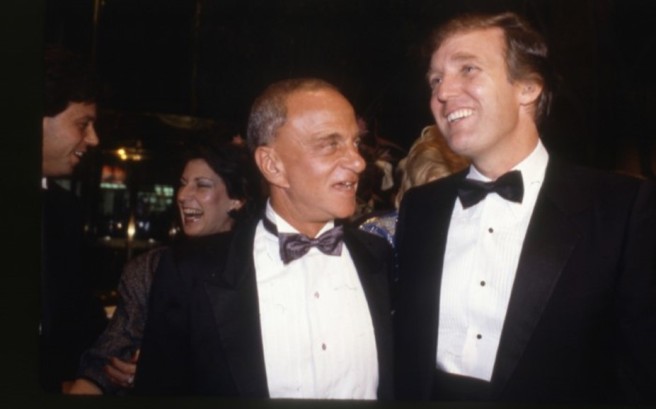 He connected with a young Donald Trump in the 70s. The government was suing Trump for his racist policies as a landlord. Cohn taught Trump his formula for success: Never admit a mistake or a defeat. Insist that you won even if you clearly lost. Sounds familiar?

Like a great many gay men in the 1980s, Roy Cohn contracted AIDS, and eventually died of it. He kept his illness secret as long as possible. He’s the only historical figure in Tony Kushner’s AIDS epic play, Angels in America. Oddly, the play isn’t mention in this documentary.

Matt Tyrnauer has created a well-made biographic documentary. The film is made up almost entirely of old footage and new interviews, which take the place of a conventional narrator.

And where is our Roy Cohn? Unfortunately, in the White House.

Where’s My Roy Cohn? opens Friday at the Clay, the Shattuck, and San Rafael’s Century Regency.

One thought on “How Roy Cohn ruined America”