Here’s a little movie that ratchets up the suspense from beginning to end.

Ida Lupino’s The Hitch-Hiker grabs you by the gut. Two men on a fishing vacation (Edmond O’Brien and Frank Lovejoy) pick up a hitchhiker, who turns out to be a notorious, psychotic killer wanted by the police.

Holding them at gunpoint, he forces his prisoners to drive into Baja California, where he hopes to cover his tracks and be safe forever. They know quite well that he only intends to keep them alive until he no longer needs them – or no longer enjoys needling them. William Talman doesn’t bring nuance to the killer, but he brings a menace that could curdle water. 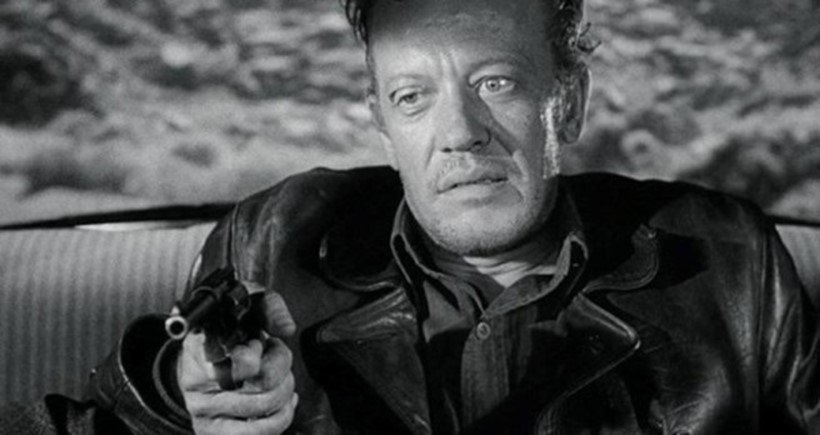 He also knows how to push people’s buttons. One of his captives is weaker than the other, and he gets the brunt of the killer’s sick humor.

Alfred Hitchcock liked to lace his thrillers with humor, allowing the audience to let off a little steam. But Ida Lupino, who directed and co-wrote The Hitch-Hiker, doesn’t let you off. There’s no laughs here. It’s edge-of-your-seat for the movie’s full 71 minutes.

As far as I know, Lupino is the only woman to direct a film noir during the genre’s golden age. And yet this is very much a film about men. Outside of extras, I don’t think the film has a single woman. The two protagonists – or perhaps I should call them captives – are basic, decent. They’re close friends who stick together, although there are hints that they’ve cheated on their wives. They’re both fluent in Spanish, a suggestion of open minds.

But the psychotic killer who holds them at gunpoint is the ultimate of toxic masculinity, taunting, showing off, and calling the men weak because they care for other people and don’t have guns in their hands. He doesn’t like it when they talk to the locals in “Mexican.” This is one of the greatest villains of all time.

For a film made in 1953, The Hitch-Hiker treats Mexicans well. They come off as decent people, loving their families and getting on with life. The Mexican police prove to be the real heroes.

With that creepy murderer in almost every scene, The Hitch-Hiker is the darkest of noirs. But visually, it’s very bright. Shot after shot looks overexposed, making the desert as ruthless as their kidnapper.

Cinematographer Nicholas Musuraca’s burning sunlight and dark shadows do well in this 2K digital restoration by the Library of Congress. The digital transfer is acceptable but not exceptional. I noticed occasional scratches. But this was a cheap, independent film, and it probably didn’t get much love in the vault.

The image is pillarboxed to the original 1.37×1 aspect ratio.

The Blu-ray presents the original mono soundtrack in two-track DTS-HD Master Audio. The two tracks are identical, making it effectively mono. I have no complaints.