B+ Drama
Written and directed by Pedro Almodóvar

You can’t watch a fictitious film by a major auteur, where the protagonist is also a major auteur, and not wonder to what degree the movie is autobiographical (think 8½). When I viewed Pedro Almodóvar’s new film, Pain and Glory, I had to wonder to what degree the main character (Antonio Banderas), is based on Almodóvar. Then I skimmed the press kit. Almodóvar closely modeled Banderas’ character, an aging filmmaker, on himself.

Okay, we got that out of the way.

Salvador (Banderas) loves one thing: making movies, but he can’t do it anymore. He’s getting old and his body is falling apart. He has back problems, throat problems, and all sorts of physical problems.

And now he’s being drawn back into the limelight, even though he has nothing new to tell. A film he made 30 years ago has suddenly become a classic. It’s been restored, and Salvador is expected to do a Q&A at a special screening. To make matters worse, he has a complicated relationship with the film’s star (Asier Etxeandia); they haven’t talked to each other in decades. And when they do rekindle their friendship (which may have been more than that), the actor brings something else into Salvador’s life: heroin.

This is not one of Aldovar’s comedies, but it has one laugh-out-loud moment, when Salvador must do a Q&A at the special screening. I won’t tell you more.

The frequent childhood flashbacks make up the best scenes in the film. Penélope Cruz plays his strong, poverty-stricken mother. She recognizes that her son is special – a genius. They are living literally in a cave, but mom is resourceful, and she gets a builder to turn this cave into a home. The young Salvador pays the worker in reading and writing lessons. 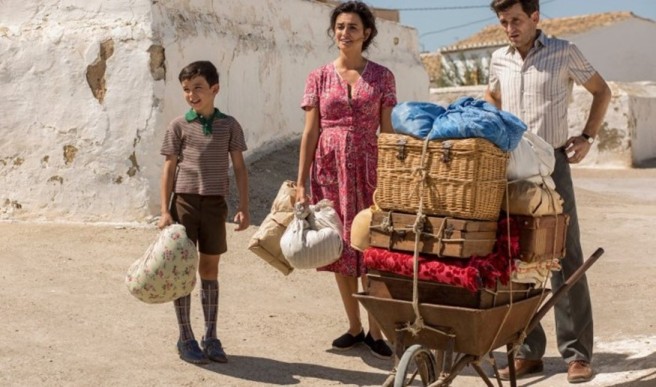 It’s nice to see Cruz as someone other than a sexpot. Yes, she’s still gorgeous, and she kisses her husband once (we rarely see him at all). But she’s a struggling peasant and sex isn’t the top thing in her mind. Nor does she use it to help herself or her son.

Near the end, we have flashbacks to his mother as an old woman. Instead of using aging makeup on Cruz, Almodóvar uses an old actress, Julieta Serrano, to play the elderly mother. It doesn’t really work. She didn’t look like an old Penélope Cruz. Besides, I couldn’t see Cruz’ soul inside.

For an Almodóvar film, Pain and Glory has very little sex. We never see Salvador with a spouse, lover, or boyfriend. There are some suggestions of earlier affairs. The only sexy scene is a childhood flashback, where the young Salvador watches a very good-looking man bathing naked.

For Pedro Almodóvar, Pain and Glory may be therapy. For the rest of us, it’s a view of something almost everyone experiences: old age.