A- Drama
Written by Ben Elton
Directed by Kenneth Branagh

First you must overcome the makeup. He doesn’t look like Kenneth Branagh. He looks too much like a portrait of William Shakespeare to believe that he’s human. But then he starts talking, with Branagh’s voice, and you can suspend your disbelief.

All is True takes an aging Shakespeare (all of 49) out of the London where he wrote his plays and into retirement in his home town of Stratford-upon-Avon. He visited only occasionally over the last 20 years, and his wife and daughters barely know him.

According to Ben Elton’s screenplay – which is, of course, a work of fiction – Shakespeare sacrificed his family’s happiness to create works that have enriched us all. No one in the film knows, of course, that he has created one of literature’s greatest and lasting legacies. But they do know that those works made him rich, so while his family missed him, they enjoyed considerable wealth thanks to his absence.

Branagh and Elton occasionally show us flashes of his genius. There’s a scene where he compares writing a play to making a garden or baking a loaf of bread. In a scene clearly intended to provoke applause from the audience, he puts a local nobleman in his place. And he explains to a stranger that when faced with lack of knowledge, he makes things up.

Which is exactly what Elton and Branagh did. All narrative films based on real people are works of fiction, and that’s how it should be. But Elton couldn’t possibly have made it accurate. We know almost nothing about Shakespeare and his family except for the dates of their births, marriages, and deaths. 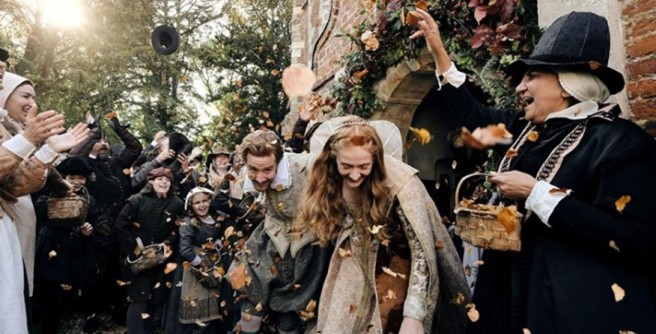 So Elton created a Shakespeare still obsessed by the death of his only son, Hamnet, buried 17 years before his father’s retirement. As soon as Will settles in his own home, he sets out to make a garden (something he knows nothing about) in the name of the dead son he barely knew.

This causes considerable strife between Will and Hamnet’s twin sister Judith (Kathryn Wilder), who feels no love from her father. An unmarried spinster, she blames everything on Will – probably with good reason.

Will’s relationship with his wife, Anne (Judi Dench), isn’t much better. Her anger is easy to understand. She’s the illiterate wife of the country’s greatest poet and playwright. Although she can’t read the love poems he wrote to someone else, she knows that they’ve been published.

Their older daughter Susanna (Lydia Wilson) has her own problems. She’s married to a Puritan who disapproves of almost anything fun, including sex and theater.

You can’t watch this film without being struck by the strange cruelty of early 17th-century Christianity. When an unmarried woman’s baby dies in childbirth, the child’s lack of a name means she cannot enter Heaven.

Branagh’s recreation of period Stanford looks surprisingly multiracial. Many minor characters are played by people of color. I have mixed feeling about this anachronism, which also popped up in last year’s Mary Queen of Scots.

This is the third British film I’ve seen since last October about a great performance artist in decline. (The other two were Oscar Wilde and Stan Laurel.) These are inevitably depressing movies. But each one seemed to be a little less depressing than the last, and a little better. This one is the best.