Many assume that if a movie focuses on very unhappy people wallowing in their many past mistakes, it must be a great film. This is especially true if the photography is conventionally beautiful, the cast British, and the main character an actual historical figure. Many such films are great. But this drama about Oscar Wilde’s last years isn’t one of them.

The Happy Prince never shows us the disaster that ruined Wilde’s life; the film deals with it quickly in written words. If you don’t know the history, Wilde was an extremely successful playwright in 1890, when the rich and powerful father of his male lover called him a “sodomite.” Wilde rashly sued for libel, and it was Wilde who was convicted. The ultimate Victorian dandy suffered two years of hard labor for his sexual preferences. 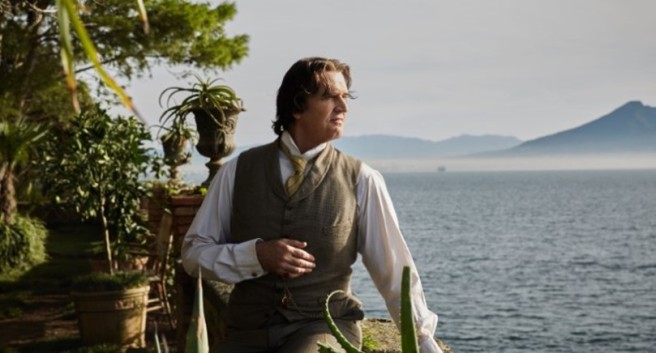 The Happy Prince covers his exile – the years he spent on the continent between his release from prison until his untimely death.

Having lost his skill as a playwright, Wilde (Rupert Everett, who also wrote and directed the film) struggles hand and mouth, begging money from friends and fans. These include Alfred “Bosie” Douglas (Colin Morgan), the young lover whose father caused all the problems, and another very young and attractive lover, Robbie Ross (Edwin Thomas). Both clearly love him, but they’re almost as irresponsible as Wilde, living on allowances from their parents. Wilde also gets money from his estranged wife (Emily Watson, in a too-small role), who needs the money to raise their children.

Repetitive scenes of sex, drinking, and asking for money take up much of the film, and it soon becomes both tiring and dull. No one ever explains why any of these people would trust the once-great playwright. Here’s a man who has asked for and received three different advances for the same play, of which he has not written a word, and yet friends and lovers continue to support him.

Everett manages to create moments of exceptional beauty, but they’re rare. In one early scene, Wilde sings for his supper, and it has an almost transcendental beauty as he warbles about his lover in the theater balcony. There are also moments of comedy, but they don’t seem to come from the once-great wit. The funniest scene involves Tom Wilkinson as the priest getting ready to give Wilde his last rites.

At times, especially when Wilde appears to be quite sick, Everett’s makeup turns him into something like Marlon Brando in Apocalypse Now.

The Happy Prince is a waste of brilliant British acting talent. Along with Everett, Watson, and Wilkinson, Colin Firth has a chance to show off his considerable gifts in a movie that doesn’t deserve them.

Few celebrities fell so steeply and quickly as Oscar Wilde. I would love to see a good film about him. This isn’t it.