Unlike most of the Blu-rays I review, Becky Sharp isn’t a beloved classic. Nor does it

deserve to be one. But if you’re interested in the technical side of film history, this Kino Lorber release is a must. This 1935 adaptation of Vanity Fair is the first full-length feature shot entirely in three-strip Technicolor.

Technicolor made the three-strip process available in 1932, and it was used for one-reel cartoons, two two-reel shorts, and a few color sequences in otherwise black-and-white movies. But it took three years to release a full-length feature.

Miriam Hopkins plays the title character in this adaptation of a stage play based on William Makepeace Thackeray’s book. An orphan living in a world of wealthy (and not so wealthy) aristocrats, Becky will do anything to get affluence and respectability. This is all set in British society around the times of the Napoleonic Wars. 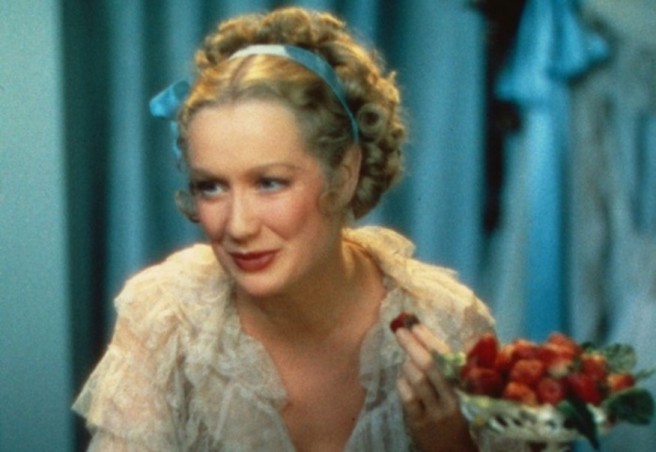 Hopkins, a saucy blonde who did some wonderful work with Ernst Lubitsch, carries the film. She’s very good, but the makeup used for this early Technicolor outing doesn’t do her justice.

The movie’s stage-play origins look disappointedly obvious in the film. Most of the time, director Rouben Mamoulian has people stand or sit while talking, slightly cheating to an imaginary audience.

But half-way through, for a little while, cinematic magic flowers. British officers stationed in Belgium, along with wives, friends, and mistresses, enjoy a grand ball. Someone explains that the little town in the distance is called Waterloo. Then they start hearing thunder…or is it canon fire? Suddenly the soldiers are off to possible death, while the civilians look for a way to safety. It’s a powerful sequence.

The Costume and Art Direction departments had a field day with color. Set almost entirely indoors, the design splashes gaudy hues all over the drapes, walls, props and especially the costumes. They go especially crazy over blue, a color that earlier color movie systems couldn’t manage.

By the way, if you want to be ridiculously literal, the movie isn’t entirely in color. The RKO logo at the beginning of the film is still in black and white. 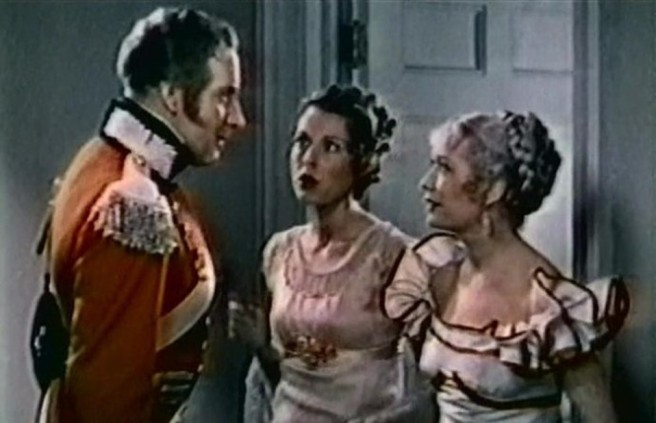 This 1080p transfer provides what may be the worst-looking Blu-ray I’ve ever seen, and certainly the worst 3-strip Blu-ray. The focus is always slightly off. Colors fade and shift in the middle of scenes.

You can hardly blame Kino Lorber, or the UCLA Film & Television Archive – which restored the film – for this condition. The film was badly treated over the decades, and many of the best source materials have been lost. All that is discussed in the audio commentary.

The original mono soundtrack, cleaned up considerably, is presented in lossless-compressed DTS-HD Master Audio. I have no complaints.

The only real extra on the disc is an audio commentary by film historian Jack Theakston. He offers fascinating stories about the history of Technicolor. He explains how the movie was altered and ruined by various distributors over the years, making a truly-excellent restoration impossible. He also gives us short biographies of several cast members; some of which I found interesting.

The only other “supplement” is a collection of trailers for seven other films currently distributed by Kino. It’s more like advertising than a real extra. If you’re interested, the trailers are for Nothinng Sacred, The Adventures of Tom Sawyer, Intermezzo, The Young in Heart, Made for Each Other, Desert Fury, and Duel in the Sun.