We waited more than 40 years to see Orson Welles’ final film, The Other Side of the Wind. What a disappointment! This just may be the worst film ever by a major auteur.

On the other hand, we now have They’ll Love Me When I’m Dead, Morgan Neville’s excellent documentary on the making of Wind.

Welles shot The Other Side of the Wind off and on from 1970 through 1976. He made a rough cut. Legal and financial problems blocked Welles’ ability to finish his film. Long after his 1985 death, Peter Bogdanovich, Frank Marshall, and many other people recut it into something close to what they think Welles wanted.

I saw They’ll Love Me When I’m Dead Thursday night at the Castro, where it opened the all-too-short Doc Stories festival (sorry, Doc Stories closed yesterday). I was unable to see The Other Side of the Wind at the Roxie on Friday or Saturday, so I streamed it at home Saturday night.

Both films are available on Netflix.

They’ll Love Me When I’m Dead

Morgan Neville, the director of 20 Feet from Stardom, Best of Enemies, and this year’s Won’t You Be My Neighbor, makes another great documentary about media and entertainment. And this time, it’s in the most fragmented, entertaining, and original way possible. New footage shot for the documentary is in black and white. Instead of the typical talking heads, interviewees are often shot in front of a radio-style microphone while wearing a headset.

The film feels disjointed and confused, but that’s absolutely right for the subject. It’s also very funny. We get to hear Rich Little imitate Orson Welles sneezing, and Peter Bogdanovich imitate Jerry Lewis interviewing a great director. This is one of the most entertaining documentaries I’ve seen this year. but then, with Orson Welles as the star, of course it must be entertaining.

I give this documentary an A. 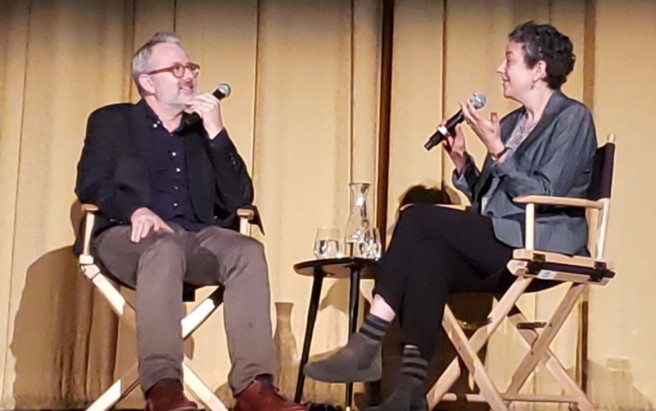 After the movie, Neville and SFFilm’s Rachel Rosen came on stage for a Q&A. Here are some highlights, edited for clarity and brevity:

The Other Side of the Wind 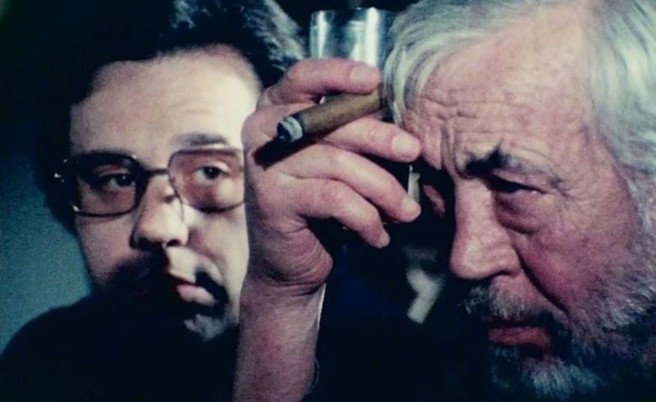 Orson Welles’ long-lost last film is just plain awful. John Huston stars as a mythically brilliant movie director who struggles to get financing for his pictures. In other words, he plays a version of Welles. But he has Huston’s Hemingway-like masculinity.

The fake documentary focuses not so much on the actual making of the movie, but more on a big party at the director’s house in the desert. People stand around and talk and drink, while they’re recorded on 16mm film – sometimes in black and white. Despite the bad photography and sound, it never really feels like a documentary. There always seems to be a camera on the right person at the right time. One particular shot would have killed the cameraman if it had been real.

But the big problem is that the people rarely say anything close to interesting. It’s just the usual clichés about Hollywood and art.

Every so often, people goes into a screening room and watches scenes of the alleged movie being made – also called, of course, The Other Side of the Wind (the name is never explained). These scenes focus almost entirely on a beautiful woman (Oja Kodar, Welles’ co-screenwriter and girlfriend) running around naked and having sex with a cute guy (Robert Random).

Orson Welles, I’m sorry to say, ended his career with a very bad film, then made us wait decades to see it. I give The Other Side of the Wind an F.