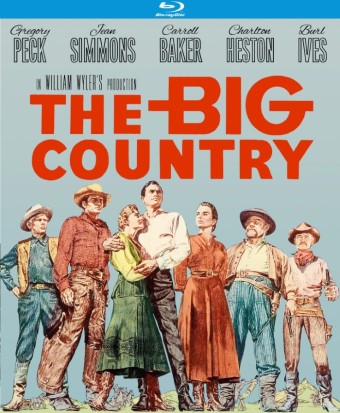 just may be the first anti-western. It condemns, rather than celebrates, the macho behavior of the mythical cowboy. The hero only fires a gun once, and he’s not aiming at anyone.

Gregory Peck plays that hero, a sea captain named James McKay, who’s traded in his ship to go west and marry the daughter of a very wealthy rancher. He doesn’t behave like a cowboy, and that upsets his intended, Patricia (Carroll Baker). In her view, and the view of just about everybody else, a man who refuses to fight after being insulted is just a coward. Few people in this big country can see how courageous he really is. 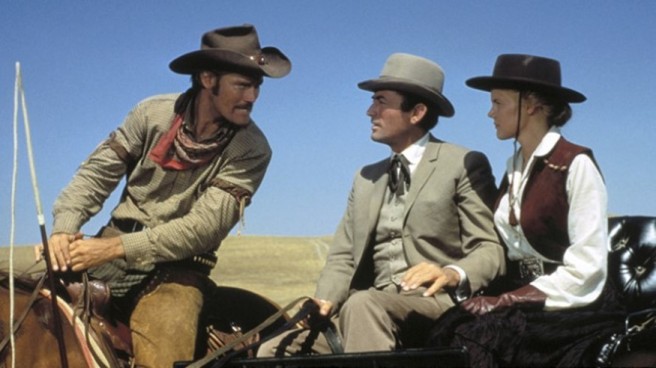 The only one who sees his quiet courage is Patricia’s best friend Julie (Jean Simmons). She’s smart and witty. Born to great wealth, she nevertheless works as a schoolteacher. She doesn’t take sides in the feud between ranchers that is the film’s primary plot. If you know anything about movies, you can see which woman will end up with Gregory Peck.

Patricia’s father calls himself Major Henry Terrill (Charles Bickford). We’re never told if he was actually in the army – or in which one. He lives in a palatial mansion in the middle of a massive ranch. Most of the men living and working there are rough and violent, and are happy to do whatever their cruel boss demands.

The prime target of Terrill’s hatred is a far-less wealthy patriarch, Rufus Hannassey, played by Burl Ives in a well-deserved Oscar-winning performance. The Major will do anything to destroy the Hannasseys, whom he views as sub-human. With his greater wealth, he holds all the cards.

Peck’s calm masculinity conflicts with the violent machismo of the other men around him. Most of all, it conflicts with Terrill’s foreman, Steve Leech, played by Charlton Heston in a rare, unsympathetic, supporting performance. Over the course of the film, Leech slowly develops a sense of humanity that his boss can never have. This is one of Heston’s best performances.

Major Terrill isn’t the only absolute villain in the movie. Hannassey has a no-good, heavy-drinking, violent son, played by Chuck Connors in his breakout role. He’s stupid, and dangerous.

Almost any western could be called The Big Country. But Wyler and cinematographer Franz Planer justify the title photographically. The film presents one sweeping vista after another. Even a fist fight is covered mostly in long shots (for good reasons, by the way).

Screenwriters James R. Webb, Sy Bartlett, and Robert Wilder (from a novel by Donald Hamilton) also justify the title with a running gag. Locals keep bragging to McKay about it being such a “big country.” Of course, for a man who has sailed the Pacific, it doesn’t seem that big.

To enhance those sweeping vistas, Planer shot The Big Country in Technirama, a large, widescreen process with twice the picture quality of standard 35mm. With a negative that big, one should expect a beautiful image.

Kino’s 1080p transfer, letterboxed to 2.35×1, provides that expected beauty…most of the time. Occasional scenes look a bit over processed. Most people probably wouldn’t notice the difference.

This is a big improvement over the photochemical restoration I saw in 2008, where “significant chunks looked mediocre and sometimes worse, with bluish blacks, heavy grain, and even out-of-focus shots.”

The original monaural soundtrack is reproduced in lossless DTS-HD Master Audio 2.0 mono. I have no complaints. (What’s 2.0 mono? Technically, it’s two-track stereo. But the two tracks are identical, which makes it effectively one track.)

Oddly, the packaging mentions only DTS, instead of the much better DTS-HD MA on the disc.

The Big Country is in stores now.