I see a lot of films for very specific reasons – they’re part of a film festival, I’m reviewing them, and so forth. The others are ones that I just want to see…or see again.

Here are three of those others: 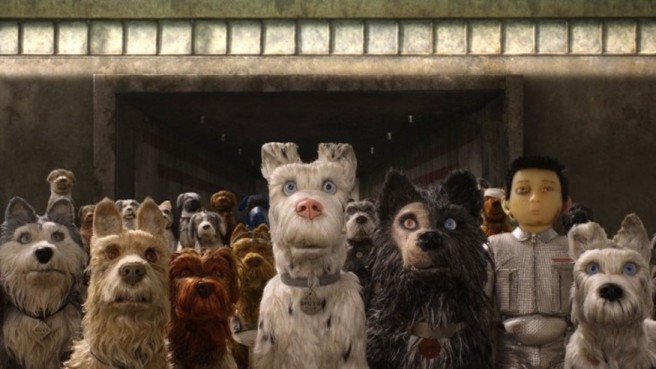 After the whimsy of Moonlight Kingdom and The Grand Budapest Hotel, it’s not surprising that Wes Anderson would make an animated feature. He had done so before, with Fantastic Mr. Fox, but who would have expected this one to be so dark – and so timely in its story of failed democracy and whipped-up mass hatred. A fable of a society that moves dogs into a horrible ghetto, it’s funny but also frightening. It’s set in Japan, probably because Anderson wanted to use Japanese visuals. When people talk, they do so mostly in Japanese, often without subtitles. When the dogs talk, they use English.

I’ve seen this one two or three times before, but I never considered it among my favorite MGM musicals. Alan Jay Lerner’s story and screenplay fails to provide an interesting story or a lot of laughs. And yet, it has all those great Gershwin songs come to life through Gene Kelly’s magnificent talent both in front of the camera as the star, and behind it as the choreographer. Oscar Levant provides most of the laughs. The movie closes with a 17-minute ballet that’s magic in and of itself. Directed by the great Vincente Minnelli.

Thomas More (Paul Scofield), a friend and close advisor to King Henry VIII, opposes His Majesty’s decision to separate the English Church from the one in Rome. Inevitably, this will lead to his execution. This well-mounted historical epic celebrates a man with the courage to stick to his beliefs, no matter the consequences. The film looks handsomely cinematic, but the overuse of dialog belies its theatrical roots (Robert Bolt adapted his own stage play). Robert Shaw, in only two scenes, steals the film as a King Henry with a Trump-like sense of entitlement.