Sunday was an especially spacy day at the San Francisco International Film Festival (also known as the SFFilm Festival), even though my brain was completely clear. Both movies I saw were about outer space. Well, barely outer space; more like low-Earth orbit. One was a documentary. The other was based on a true story that few Americans know. [[Note: I corrected an error in this paragraph.]] 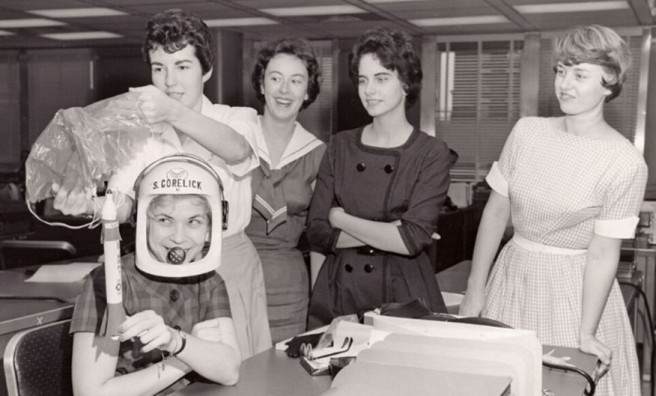 The Mercury 7 astronauts were selected amongst a pool of exceptional airplane pilots, after many arduous physical and mental tests. But one requirement was easy to confirm. They all had to be men. (They also had to be white, but that’s another documentary.)

Shortly after the selection, the doctor who created those tests ran them on 13 other seasoned pilots – all women. They did better than the men, but to NASA and the US government, women belonged on Earth.

David Sington and Heather Walsh’s well-made but conventional documentary opens up the story of these 13 women. Using old news footage and new interviews, the film starts with young women flying planes when that seemed shocking, to Eileen Collins – the first woman to pilot the space shuttle. In between, it shows how sexism can be so heavily weaved into the culture that it’s invisible.

I saw Mercury 13 at SFMOMA‘s Phyllis Wattis Theater, which, for some stupid reason, had its air conditioning turned up to Arctic.

You have one more chance to see Mercury 13 at the Festival, at the Roxie, Tuesday, April 10, at 4:00. If you miss that screening, don’t despair. It will be available on Netflix on April 20.

After the screening, Festival Executive Director Noah Cowan lead a Q&A with directors Sington and Walsh, NASA/JPL Engineer Nagin Cox, and Mercury 13 veteran Gene Nora Stumbough Jessen, who is interviewed extensively in the film. Some highlights, edited for brevity and clarity:

Sington: I worked on a film about ten years ago about everyone who walked on the men. It never occurred to me that they were all men. I eventually realized that what had seemed natural was really a choice.

Stumbough Jessen: Mercury 13 was the best thing that ever happened to me. But in the end, I was an unemployed astroNOT.

Cox: There were still barriers at NASA that women need to overcome, although now the teams I work on are generally 40-50% women. It took a very long time for that to happen. But every once in a while I realize that “Oh, I’m the only woman in the room.”

Stumbough Jessen: When I saw the movie, I wondered about the old lady they hired to play me.

This Russian space thriller beats Gravity in creating the weightless mortal danger of space. It’s also vastly more suspenseful. But unlike Alfonso Cuarón’s orbital adventure, Salyut-7 is based on a true story.

In 1985, the Salyut-7 space station lost all power. No one was onboard, but that didn’t make it safe. The station would eventually fall to Earth and, if it fell on populated land, cause massive death and destruction. Also, a dead space station is salvage by international law, meaning the Americans could take it home in their new space shuttle and learn about Soviet technology.

So the government sends two cosmonauts – a brilliant pilot and an engineer who knows the station in and out – to save Salyut. But a dead space station is a deathtrap. They must dock onto the twirling station, deal with cold, water, fire, lack of electricity, and eventually the loss of oxygen – all the while trying to get the station working again.

The movie’s intended Russian audience must have known how it would end. I didn’t. That made it an exceptionally frightening thriller.

I saw Salyut-7 at the Castro, which was a great theater for this sort of big space movie (although the Dolby Cinema would probably have been even better). There was no Q&A after the film.

Unfortunately, the film will probably not be seen again in this country.

2 thoughts on “My Spacy Sunday at SFFILM Fest”