Somehow, despite all these film festivals, the Chaplin Diary, and Blu-rays, I’ve still found time to just go to the movies (or watch them at home). Here are five, listed from best to worst.

Few historical deaths can create as much merriment. Once their General Secretary is dead, the terrified men in his inner circle struggle to gain power or simply survive, with extremely funny results. A cast of exceptional comic actors, including Steve Buscemi, Michael Palin, and Jeffrey Tambor, find a mother lode of dark comedy as these scheming would-be dictators try to outmaneuver each other. And yet, director Armando Iannucci and his three screenwriting partners know when to stop being funny, and let the audience feel the tragic weight of the Communist experiment.

I have no idea if this movie is at all historically accurate. I’m curious, and I may look it up somewhere, but historical accuracy doesn’t affect my view of the movie.

One more point: With Trump firing people right and left, the movie feels kind of relevant.

The sordid story of Tonya Harding, told by Tonya, her violent first husband, and her truly awful mother. No, this is not a documentary; actors – including Margot Robbie, Sebastian Stan, and Allison Janney – play the parts. None of the characters they play could be called good and dependable people, and you get the sense that they were all very badly raised (with Tonya, we see it). On one level, their shear absurdity becomes funny, especially early on. And yet, as the story continues, you find yourself caring for them, especially for Tonya.

The first Marx Brothers movie without Zeppo has some of their best sequences. Not only the deservingly famous stateroom scene, but also the in-and-out-of-the-bedroom sequence and the climatic assault on the Opera House. But producer Irving Thalberg insisted on a conventional story structure, which required the Marx Brothers to be nice guys and even occasionally victims – a move that takes away lot of Marxist magic. Another problem: At least half of the movie is taken up with conventional, mediocre, and unfunny story. Whenever leading man Allan Jones is on screen (which is often), I found myself wishing it was Zeppo. 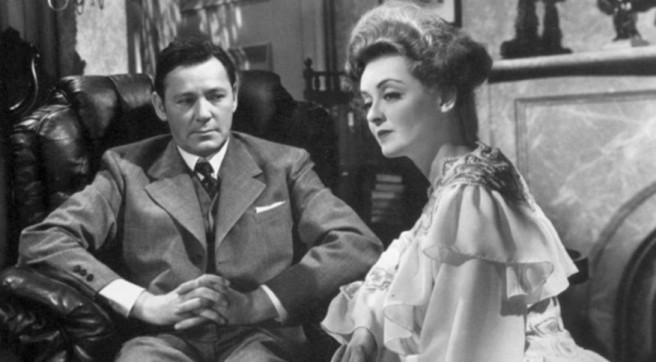 Considering all of the top names involved (Lillian Hellman, William Wyler, Bette Davis, Samuel Goldwyn, and the great cinematographer Gregg Toland), it should have been better. The story of a wealthy, southern, but very dysfunctional family at the turn of the 20th century, feels stagey and dialog heavy (Hellman based her screenplay on her own Broadway hit). To make matters worse, Meredith Willson’s annoying musical score rarely stops. Even when people are talking (which is most of the time), the violins tell us how sad everything is.

And yet, the story of money pulling a family apart is a strong one. The film contains some excellent scenes – especially in the final half hour. The cast, which includes Herbert Marshall, Teresa Wright, and a very young Richard Carlson, all give fine performances. It’s not a complete loss by any means.

B- The Thoughts That Once We Had (2015), Pacific Film Archive

This visual essay on the cinema tries to capture the whole essence of the art form by showing us a collection of clips, mostly from theatrical movies, but also from television, newsreels, and even security camera footage (specifically of the Patty Hearst bank robbery). Filmmaker Thom Andersen uses intertitles, mostly quotes from philosopher and film theorist Gilles Deleuze, instead of spoken narration. These quotes might have been enlightening on the page, but cut down to a few words, they’re mostly pointless. Nevertheless, it’s fun to watch the clips and wonder what films they’re from (I recognized about a third).

[Update: Hours after this article went live, I corrected a misspelling. Thanks to madviolist (full disclosure: my wife) for bringing the error to my attention.]

One thought on “Movies I’ve Recently Seen: The Death of Stalin, I, Tonya, A Night at the Opera, The Little Foxes, & Thoughts That Once We Had”