You don’t expect film noir from Louis Malle. But his first narrative feature, Elevator to the Gallows, is as dark, suspenseful, and entertaining as the best crime dramas that ever came out of Hollywood. 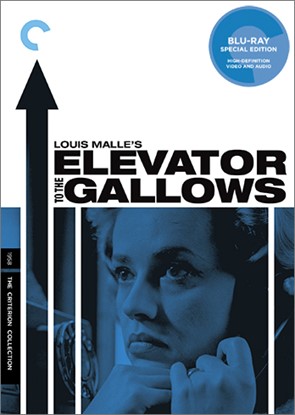 Made in France in 1957 (it was released in ’58), the complex yet tightly-told story takes place over about 12 hours. You watch the four main characters mess up, commit horrible crimes, and dig themselves deeper while trying to get free.

When we first meet Julien (Maurice Ronet), he’s already planned the perfect murder. He’s a cool, collected warrior with military training as a special op. He’s a professional. The murder will look like a suicide, and nothing will go wrong.

Except, of course, that it does. He leaves an important clue at the scene of the crime. He gets trapped in an elevator overnight. The police accuse him of two murders he didn’t commit. Much of the movie’s dark humor comes from watching him slowly unravel. 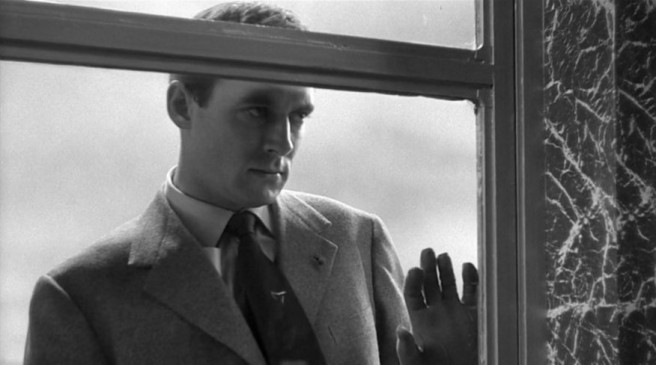 His lover and partner in crime, Florence (Jeanne Moreau in a breakout performance), wanders the streets of Paris, wondering why Julien didn’t appear at their planned rendezvous. To make matters worse, she thinks she saw him drive away with a much younger woman.

What she saw was a couple of young kids, barely out of their teens, who have stolen Julien’s car. Their joy ride will have serious consequences. Georges Poujouly and Yori Bertin play the reckless lovers, filled to the brim with the idiocy of youth.

Florence does little beyond wandering through the night, thinking and talking to herself, and yet it’s a star-making performance. Her beauty and talent have a lot to do with that, of course, but so does Miles Davis’ groundbreaking score. Her fears and traumas become focused through Davis’ horn.

The French coined the term film noir. Elevator to the Gallows proves that they had the knack for it, as well.

Criterion presents the black-and-white film, from a new 2K digital restoration, in 1080p resolution. The image is pillarboxed to 1.66×1 – the standard French aspect ratio in the late 1950s.

You see a lot of film grain here, but that’s how Elevator looked from the start. But through those grains, the transfer captures deep blacks and bright, neon whites. The movie shimmers with the rainy night. It looks like noir is supposed to look.

Criterion presents the single, mono, French track in uncompressed, 24-bit LPCM. It captures the sounds of the city, the frequent thunder, and Davis’ great music. This is probably very close to what Malle heard when he signed off on the mix.

Booklet: 23 pages. Three interesting articles about Malle (and by Malle), the film, and its place in his work.

Timeline: Like all Criterion Blu-rays, you can add your own bookmarks. When you re-insert the disc for the second, third, or umpteenth time, you’ll get an option to go back to where you started.

Louis Malle: 17 minutes. This interview was videotaped for Canadian TV in 1975. Like most of the extras, it’s in French with English subtitles. The interview is mostly about Elevator, with a bit about Murmer of the Heart, as well. He also talks about his work with underwater explorer Jacques Cousteau where he “only directed fish.” (If you’re as old as me, you might remember Cousteau’s frequent TV specials.)

Jeanne Moreau: 18 minutes. Recorded for Criterion in 2005. This one is really interesting. She talks, in heavily-accented English, about being asked for the part, the shooting, other films, and how cinema has evolved. She also talks about how, before Elevator, she wasn’t considered attractive enough to be a leading lady. (Were the casting directors blind?) Clips of the film makes the talk visually interesting.

Malle and Moreau at Cannes: 11 minutes. This conversation, in French with subtitles, was recorded at the 1993 festival. There’s not much that you wouldn’t find in the previous interviews, but you get a sense of their friendship.

Maurice Ronet: 5 minutes. This TV interview was made shortly before Elevator. The actor does a good job dealing with an idiotic interviewer who clearly thinks that Ronet is nothing but a pretty face. The interviewer also asks if acting isn’t a masculine profession. It’s fun to watch Ronet dodge stupid questions. In French with subtitles.

The Miles Davis Score: Here are three separate videos about the single night in which Davis and four other musicians improvised the score.

Crazeologie: 6 minutes. A short Malle made in 1954. It was intended to be part of the then-current Theater of the Absurd, but it’s really more about the cinema of the pointless. Well, everyone who went to film school made a stupid short.

Trailers: 4 minutes total. First the original French release trailer, followed by one for a 2005, American re-release.