Why would anyone spend up to $40 (MSRP; you can buy it for less) for a Blu-ray of a movie that runs only 15 minutes?

There are several good reasons. George Méliès’ A Trip to the Moon is not only a fun and imaginative entertainment; it’s also one of the most important motion pictures ever made. One of the first to tell an original story, it became cinema’s first international hit.

And in this new Blu-ray/DVD release, Flicker Alley provides many ways to watch the movie. You can watch it in color or in black and white (it was released both ways in 1902). There are five separate musical scores and two options for narration. Add a fascinating, hour-long documentary and two additional shorts, and you’ve got a disc worth buying.

Magician-turned-filmmaker George Méliès is arguably the first artist of the cinema. He created astonishing special effects and placed them into whimsical stories. A Trip to the Moon, generally considered his masterpiece, is more fantasy than science fiction; the astronauts have no trouble breathing on the moon, but they must deal with snow.

This was filmmaking before cinema found its grammar. There’s no editing within scenes. Almost everything is in long shot, making the frame a sort of theatrical proscenium. There’s one close-up in Trip, and its one of the most famous images in cinema.

Flicker Alley’s package contains both a Blu-ray and a DVD. I’ve only looked at the Blu-ray.

Like all very early movies, A Trip to the Moon was shot in black and white. Theaters had a choice between screening normal, black-and-white prints, or, for extra money, hand-painted, colorized ones. Black and white prints have been circulating for ages, but only in this century has Lobster Films and Technicolor restored the painted version.

The Blu-ray contains both versions, but the disc’s menus make finding them a bit confusing. The top menu’s Play Feature option gets you to the color version. You must select the Bonus Features option to find the black and white version. Each version has multiple soundtracks to choose from.

Color version: Very strange and beautiful. At times you’re not sure if you’re looking at a moving photograph or a moving painting. It’s not very sharp (you try painting thousands of photos, each less than a square inch), but it’s exciting and beautiful.

Black and white version: Not surprisingly, the monochrome version looks sharper and cleaner. You see things better, but it’s not as fun. 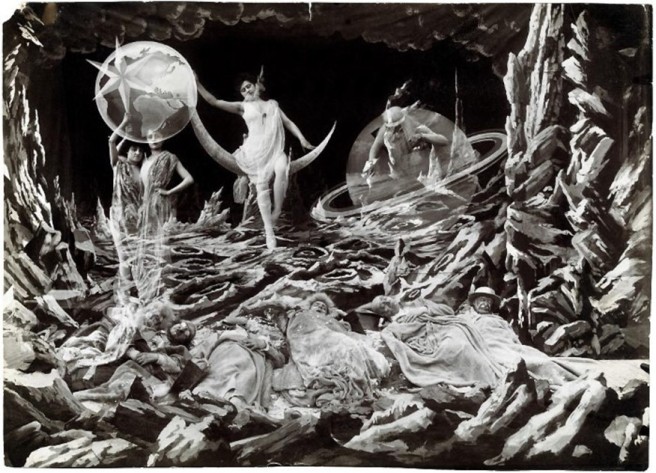 The disc offers three musical soundtracks for the color version, and two different ones for the black-and-white.

And then there’s the issue of narration. A Trip to the Moon was made before anyone thought of intertitles, and Méliès intended it to be screened with a live monologue. The disc offers two options here, as well.

All soundtracks are in uncompressed, LPCM two-track stereo.

Booklet: 21 pages. If you can read tiny print, you’ll probably enjoy this long article about Méliès’ working habits, his studio, and the making of A Trip to the Moon. The article is not bylined, so I don’t know who wrote it. It contains much fascinating information.

The Extraordinary Voyage: 66 minutes. This wonderful documentary covers Melies’ career, the making of Trip, cinema history from there until now, and the very difficult color restoration.

The Astronomer’s Dream: 3 minutes. Another space-oriented Méliès short, and a funny one. At one point, the moon eats the astronomer’s telescope. Donald Sosin keeps it lively with a jazz-inflected piano score.

The Eclipse, or The Courtship of the Sun and the Moon: 9 minutes. This one doesn’t have much of a story, but it has some very funny bits. The best moment is the solar eclipse of the title, which feels obscene – but in a nice way. The music by Alexander Rannie gives the short a fine setting.