Extreme perfectionism slowed Chaplin down as he made his last Mutual comedies. Up through Easy Street, his ninth movie with the company, he had managed to meet his contract’s one two-reeler-a-month schedule. But he took three months to make The Cure, and another three for The Immigrant. His last Mutual, The Adventurer, took four months to complete.

In this seventh entry of my Chaplin diary, we look at the films he took so long to make. I watched them off the Chaplin’s Mutual Comedies Blu-ray set. Each one is a comic gem. 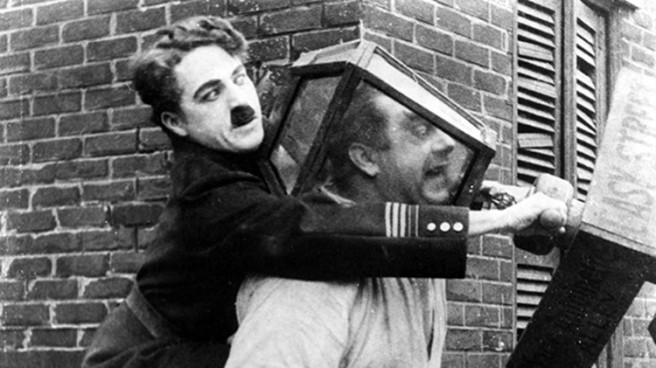 For only the third time since The Tramp, Chaplin’s character can be reasonably called a tramp, as in a homeless person with no regular income. In the credits he’s identified as “A Derelict,” which is pretty much the same thing. But that doesn’t last long. He gets a job as a policeman because no one else on the force wants the Easy Street beat.

Easy Street is a hard place to live – a violent slum run by a sadistic brute played, of course, by Eric Campbell. Charlie is no match for the brute when it comes to strength, so he must use his wits.

But Easy Street is more than just very funny. It looks at, and makes us laugh at, some of the worst effects of poverty, including street violence, hunger, overcrowded families, spousal abuse, and drug addiction. The effects of Chaplin’s impoverished upbringing clearly come to the surface. 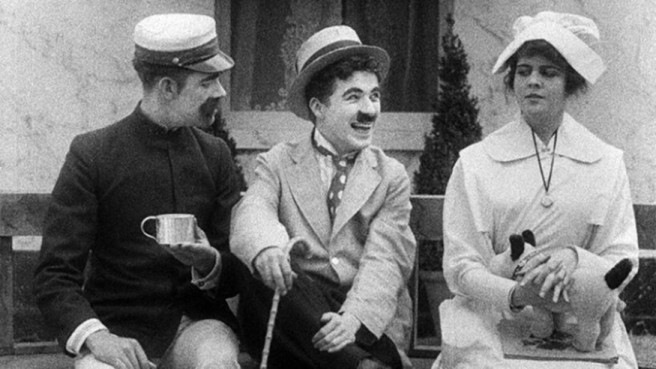 Chaplin does the rich drunk act again, but with much better results than in One A.M. A soused and well-dressed Charlie goes to a spa to cure his drinking. He eventually manages to get almost everyone, employees as well as guests, blotto.

Eric Cambpell plays a guest with a short temper and a bad case of gout. He also hits on Edna in the most gross and offensive ways imaginable. Naturally, Charlie manages to accidentally pound, stab, and beat Eric’s bad foot – something we can laugh at because of Campbell’s rude treatment of Edna.

This was the first film on which Chaplin spent months. His original plan was to put Charlie in the spa’s staff, but he changed the whole concept and reshot everything. It was the right choice, and The Cure is a very funny movie. 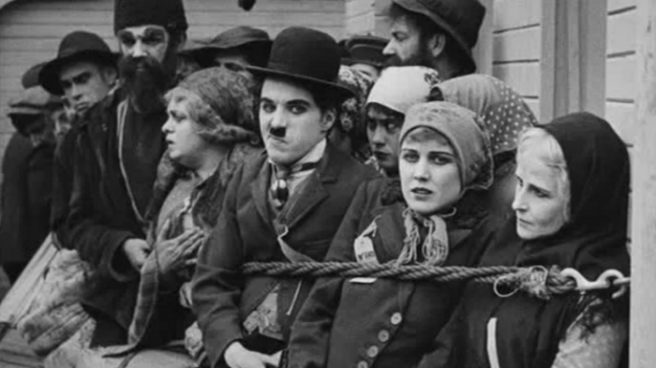 This two-reeler feels like two one-reelers. In the first half, Charlie is in steerage on a ship crossing the Atlantic. Chaplin gives us gags about the rocking boat, seasickness, and gambling. He balances the comedy with sentiment involving Edna and her sick mother. Feeling sorry for them, Charlie secretly slips his gambling winnings into Edna’s pocket. Then he changes his mind and takes some of the money back. Of course, an officer sees only the taking out, and Charlie is accused of pickpocketing. Surprisingly, this conflict is solved quickly, without a chase. This first part ends with a very funny gag that plays on America as The Land of the Free.

The second part is set a cafe, with Campbell as a glowering and potentially violent waiter. Penniless Charlie finds a coin on the sidewalk, and happily enters the restaurant for a rare meal. But he loses his coin and comes up with all sorts of tricks to postpone the inevitable beating. Edna, of course, turns up there, as well. 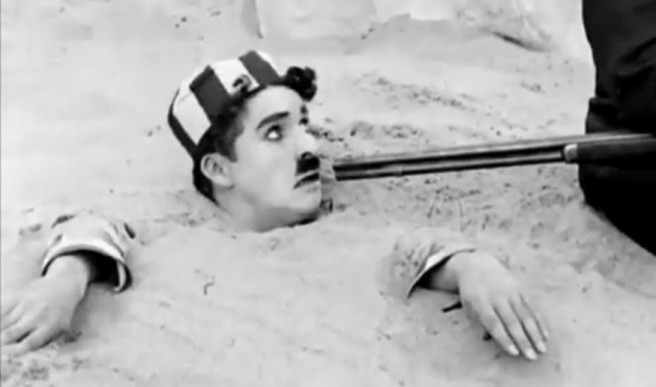 Chaplin plays an escaped convict who ends up at a high society party in his last Mutual and his funniest short. The Adventurer starts with a great chase at the beach and ends with another one in a mansion. In between, he saves several people from drowning (including a very unthankful Eric Campbell), wakes up to assume he’s back in jail, and deals with ice cream going down his pants while making polite chitchat.

The chases that bookend this movie are stunning. Charlie avoids prison guards and policemen with split-second timing. His selection of useful props include a sliding door, a balcony, and a cliff. It may have taken Chaplin four months to make this short movie, but the work is clearly visible on the screen.

Eric Campbell had an interesting job. How many people get paid for beating up their boss? Tragically, Campbell died in a car crash after making The Adventurer.

And Chaplin? After a year and a half as the highest-paid employee in the world, it was time to get off the payroll and go into business for himself.

Next up: The First National era.