The Motion Picture Academy released the 2017 Oscar nominees this morning, and for the most part, they did a good job. (As I write this, oscar.com is over capacity. I’m getting the results from CNN.)

Let’s start with the big one: Best Picture. There are nine nominees this year, and I saw and liked eight of them. The big, happy surprise is Get Out, easily one of the best movies of 2017, but a long shot for a major Oscar. Not only is it a small-budget horror comedy, but one released early in the year. Academy members, like most Americans, have short memories, and if you want your movie to take the big prize, it better be released after Halloween.

For seven years in a row now, the Best Picture winner had its Bay Area premiere at the Mills Valley Film Festival, so if you’re placing bets, you should consider which films played there. Four of the nominees screened at that festival: Lady Bird, Three Billboards Outside Ebbing, Missouri, Call Me by Your Name, and my favorite film of last year, The Shape of Water. Obviously, I’m hoping Guillermo del Toro’s cold war fairy tale wins the prize, but I think Three Billboards is a more likely chance.

The Shape of Water

But maybe the Mill Valley streak will die this year. Darkest Hour is a strong contender, being the sort of rousing historic spectacle that the Academy loves. On the other hand, it’s the second of two films covering the same historical event – the other  being Dunkirk. That may split both votes.

The other two Best Picture nominees are The Post (my review will come up in my next Movies I’ve Recently Seen article) and Phantom Thread, which I have yet to see.

A few comments on other Oscar races:

Actress in a Supporting Role: I’ve only seen two of the five films nominated: Laurie Metcalf for Lady Bird and Octavia Spencer for The Shape of Water. Of the two, I’d go for Metcalf. Nothing against Spencer, but Metcalf had a more difficult and complex character to portray. 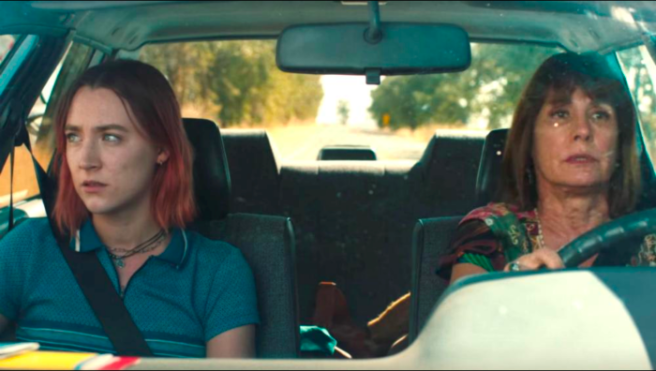 Actor in a Supporting Role: I’ve seen all of them except Christopher Plummer, whose last-minute recasting in All the Money in the World may become legendary. But he’d have to be incredible to match Sam Rockwell’s performance in Three Billboards.

Documentary Feature: I’ve seen only two of the five, Abacus: Small Enough to Jail and Faces Places. Both were from directors I like, and both disappointed me. I can’t understand why the magnificent and timely Human Flow didn’t even get nominated.

Original Screenplay: I’d have a hard time choosing between the five nominees: The Big Sick, Get Out, Lady Bird, The Shape of Water, and Three Billboards Outside Ebbing, Missouri. But I noticed something odd about the way CNN lists screenplay nominees. For Actor, Actress, and Director, they list the artist, then the film title: “Daniel Day-Lewis, Phantom Thread,” “Greta Gerwig, Lady Bird,” and so on. But for screenplay nominees, they just list the names of the films, ignoring the artists who wrote them. Screenwriters really are the hidden auteurs of cinema.

Actor in a Leading Role: Gary Oldman will win this one for Darkest Hour. His performance is excellent, but that’s not the only issue. It’s the sort of role that wins Oscars. He plays a British historical figure, and he’s almost unrecognizable under the makeup. All he would need to cinch the award would be faking a disability.

Actress in a Leading Role: Frances McDormand for Three Billboards Outside Ebbing, Missouri. I loved Sally Hawkins in The Shape of Water, but McDormand gives one of those performances that will be remembered for decades.