You’ve probably already read wonderful things about the big, new war film, and you probably already know something about the famous evacuation. So I’ll just focus on story construction. The film cuts back and forth between three stories. One is about a soldier trying desperately to get off the beach. Another follows a civilian and his two sons taking their fishing boat into dangerous waters to rescue soldiers. The third concentrates on two fighter pilots providing air cover. The stories take place over different stretches of time (a week, a day, and an hour), and yet the cross-cutting doesn’t get confusing. All three stories are suspenseful and frightening, but the sea story is by far the best.

I’m glad I saw it in 70mm IMAX. The overwhelmingly giant screen put me on the beach, the ocean, and the air.

This 1931 drama, directed by William Wellman, is typical of the pre-code Warners style. It’s smart, short, and tells a tough story about life in the big, crime-ridden city. A very young Barbara Stanwyck plays the title character, and the movie takes every possible chance to show her off in slinky underwear (as I said, it’s pre-code). Clark Gable, pre-fame and pre-mustache, plays the main bad guy, and does it well. Joan Blondell plays the best friend. Fun, spirited, and entirely predictable. And it meets the Bechdel test.

B- The End of the Ottoman Empire (2016), Pacific Film Archive 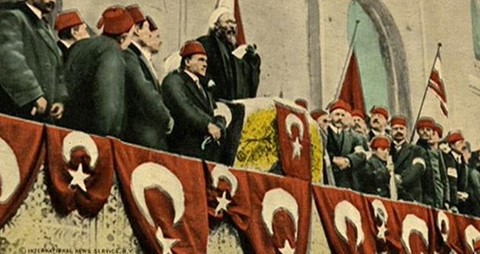 This isn’t really a movie; it’s a two-part French TV documentary. As historical documentaries go, it’s not bad; unexceptional for PBS but way better than the History Channel. But little thought was put into making a good English-speaking version. For instance, when a British or American historian is talking to the camera, we hear them speaking English, but their words are drowned out by the verbal French translation, and the English subtitles don’t match the verbal English. But it’s an important piece of history, and one that’s made a mess of the world we live in.

All the President’s Men (1976), Oakland Paramount

I saw this film, a dramatization of how two Washington Post reporters broke the Watergate scandal, when it was new. I was disappointed at the time; but I’ve heard so many good things about it since that I thought I should give it another chance.

But something was wrong acoustically at the Paramount, and the movie had a horrible echo – or at least where I was sitting. I had to struggle to understand the dialog, and this is a very dialog-driven movie. Because I’m not sure I saw it properly, I’m not giving it a grade.

But from what I could tell, it’s a better film than I remembered. It helps that the story is so important, and also suddenly timely (during the closing credits, someone in the audience shouted “We need a sequel”). The film focuses entirely on the investigation, without subplots. We never learn anything about the reporters’ private lives, and very little about how they felt about each other. Both Robert Redford and Dustin Hoffman give good performances. I may want to see it again with better acoustics.