Not surprisingly this time of year, but you can watch It’s A Wonderful Life in three different Bay Area theaters this week. And on Christmas day itself, you can make a choice between Fiddler on the Roof and Goodfellas. And how’s this for a present: both of Kurosawa’s Shakespeare films at the PFA?

Also, the New Parkway turns five today (Friday). In celebration, every movie ticket is $5 this day. There will be raffles at every screening, and, I believe, cake.

But there’s one thing you won’t get for Christmas: a film festival. We won’t have any of them until next year.

I haven’t seen this romantic comedy in a very long time. Taking place over several years, it follows a young man and woman who are just friends until, on one New Year’s Eve… Like everyone else, I mostly remember the fake orgasm scene. But I think the rest of it was pretty good, as well.

William Shakespeare created his saddest, most hopeless tragedy in King Lear. Almost four centuries later, Akira Kurosawa loosely adapted it into his saddest, most hopeless film. And also one of his most visually striking. Kurosawa altered the story considerably, and not only by changing the three daughters into sons. Ran tells us that the sleepy, vain, senile king (Tatsuya Nakadai) was once a cruel and merciless warlord who built an empire on strict obedience and heartless violence. Fate punishes the wicked in Ran, but the virtuous suffer just as badly. Read my Kurosawa Diary entry and my Shakespeare adaptation article. Part of the series The Art of Cinematography.

One of the best black comedies ever filmed, and the best dystopian fantasy ever. In a bizarre, repressive, anally bureaucratic, and thoroughly dysfunctional society, one government worker (Jonathan Pryce) tries to escape into his own romantically heroic imagination. But when he finds a real woman who looks like the girl of his dreams (Kim Greist), everything starts to fall apart. With a very funny Robert De Niro as a heroic plumber. Read my Blu-ray review. On a Gilliam double bill with Twelve Monkeys, which disappointed me when it was new.

Henry Hill (Ray Liotta) was just another crook working for the mafia, until he went too far. Martin Scorsese’s brilliant retelling of Hill’s life follows him from his enthusiastic, adolescent leap into crime until, 25 years later, he rats on long-time friends to save his neck. (Was that a spoiler? Not really.) Liotta narrates most of the film as Hill, who clearly loved his life as a “wise guy.” But while the narration romanticizes the life of crime, Scorsese’s camera shows us the ugly reality. Goodfellas is dazzling filmmaking and incredible story-telling. Read my A+ essay. 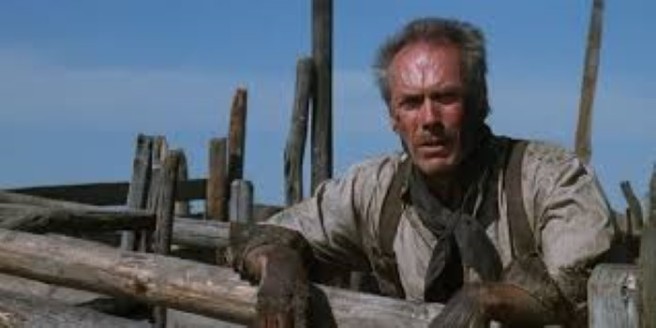 Many consider Clint Eastwood’s Oscar-winning western a masterpiece. I call it a near miss. For most of the film’s runtime, it brilliantly analyzes and deconstructs the genre. Violence is ugly, painful, and cruel. “It’s a hell of a thing, killin’ a man,” says Eastwood’s character. “You take away all he’s got and all he’s ever gonna have.” But as the film nears its climax, it becomes a conventional western, and in doing so, it violates everything that has gone before. Read my full report. New 4K digital restoration.

Kurosawa stands Shakespeare on his head with this haunting, noh and kabuki-inspired loose adaptation of Macbeth. Toshiro Mifune gives an over-the-top but still effective performance as the military officer tempted by his wife (Isuzu Yamada) into murdering his lord. The finale–which is far more democratic than anything Shakespeare ever dared–is one of the great action sequences in cinema. Read my Kurosawa Diary entry and my Blu-ray review. Another part of the series The Art of Cinematography.

What a great way for Jews to spend Christmas afternoon! As a teenager, I loved the musical stage play and hated the movie (I saw both of them when they were relatively new). I felt that the film’s production values were too big, and the comic timing was off. Now I can appreciate what director Norman Jewison was trying to do. Rather than making a musical comedy with a period setting and a serious undertone, he turned it into a historical spectacle with songs. The result has its problems, but it also has its joys.