I spent Saturday at the Castro Theater, attending the San Francisco Silent Film Festival’s Day of Silents. They screened six feature-length movies, all with live musical accompaniment, starting at 10:00AM and ending a little after 11:00PM. The five intermissions ranged from 30 minutes to an hour.

Here’s what I saw, in the order I saw them: 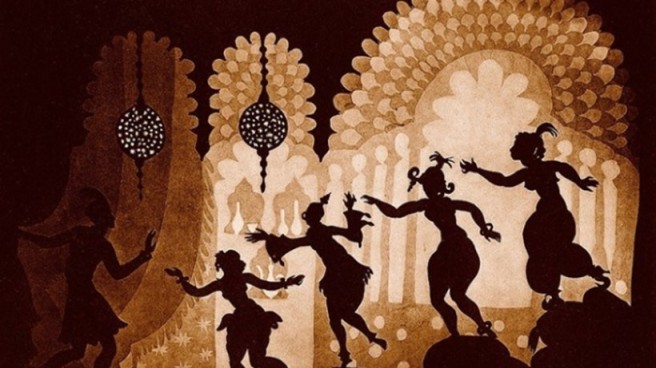 The earliest known animated feature looks like no other movie ever made. The characters are neither drawings nor puppets, but black, opaque, cut-out silhouettes. As such, it lacks the detail we expect from classic Disney or today’s Pixar, but it’s non-the-less beautiful and enchanting. It also enhances the viewer’s imagination.

The story is a common hero’s journey, with a brave hero, an evil magician, and a good witch. Aladdin pops up, as well.

This was the only movie projected digitally throughout the day, and for the most part, the heavily-tinted images looked fine. But occasionally I wondered if the people doing the restoration were asleep at the switch. How else could you explain a visible frame line in a digital restoration?

The film was screened with the original German intertitles and English subtitles.

In the near future (the 1950s), an epidemic has killed all the men, leaving a society of frustrated women. Then one living man is found.

The Last Man on Earth milks every possible comic variation on the concept, and it’s occasionally very funny. I’ll never think of a cocktail shaker the same way again. But it’s still a one-joke comedy, and it can’t really fill its 70-minute run-time.

One of silent cinema’s greatest melodramas, Henry King’s rural masterpiece makes you feel the horror of violence, and how that horror effects not only the victim but friends and family. Richard Barthelmess gives a great performance as David, a teenage boy who wants to take on adult responsibilities. And Ernest Torrence provides one of cinema’s great villains.

As I watched the movie, I couldn’t help wondering if it inspired my favorite Harold Lloyd comedy, The Kid Brother. They have similar settings, similar protagonists (an overlooked youngest son), a truly scary villain, a long climactic fight, and even a comic scene involving a man (or men) trapped outside without proper clothing.

The 35mm print was just beautiful.

In this British film set in Paris, a thief and his wife have problems with a rich, spoiled couple. The movie has its moments, including some impressive staging and camera movement in a nightclub sequence. But the story is rarely believable or effective, the performances are overacted, and it is one of the rare silent films that made me wish I could hear what the characters were saying.

To make things worse, the print was horrible – seriously scratched and very unstable. Intertitles especially quivered like it was April, 1906. Jump cuts told me that pieces of film were missing.

And finally, Sascha Jacobsen and the Musical Art Quintet offered up a repetitive score that seemed stuck on the same tempo.

The first time I saw this film, on DVD years ago, I didn’t like it. But this time around, on the big screen with a large audience, it came alive. But it still didn’t meet the expectations suggested by the idea of Ernst Lubitsch adapting one of Oscar Wilde’s best-loved plays.

One problem is that the intertitles never use Wilde’s brilliant dialog. No says gets to say “Scandal is gossip made tedious by morality,” or “I can resist anything except temptation.”

In the place of brilliant dialog, Lubitsch adds subtle visual gags. He also often lets us watch people talk without letting us know what they’re saying. Oddly, it usually works. We may not hear the words, but we see the emotions.

The Mont Alto Motion Picture Orchestra helped. They added humor, sometimes by making no sound at all, and heightened the drama. 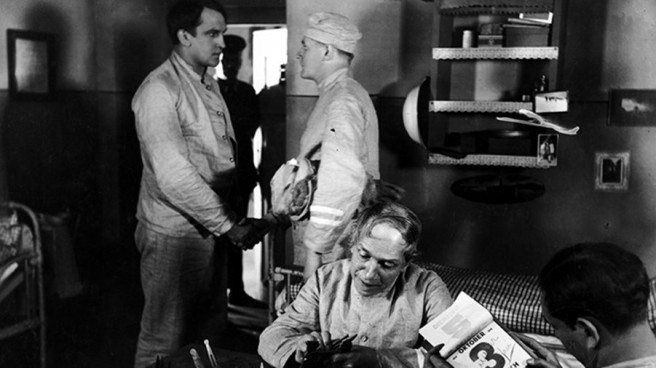 This turgid, slow message movie hits you over the head with its moral: Felons in prison and their spouses outside need conjugal visits. A loving husband accidentally kills a man while protecting his wife’s honor, and goes to prison for three years. Husband and wife suffer from lack of sex. Eventually, the wife has an affair with a very nice man. The husband, inside, also has an affair with another very nice man. Good acting, but dull, slow, and it beats you over the head.

If the lurid English title doesn’t seem to match the story, it’s because the original German title, Geschlecht in Fesseln, doesn’t translate well. Geschlecht, for instance, doesn’t mean sex as in making whoopie, but as in gender.

Like Prince Ahmed, the 35mm print had German intertitles, to which the Festival added digital subtitles.