I’m starting out on a survey of Charlie Chaplin’s work. My plan is to view every movie he wrote and directed, in chronological order.

Chaplin started his movie career at Mack Sennett’s Keystone studio. He entered Keystone late in 1913 with a weekly salary of $150. He left Sennett a year later, with a level of fame unheard of at the time, to work for another company at a weekly salary to match: $1,250.

Chaplin acted in 42 movies – most of them very short – in that year, but I’m only covering the 20 he wrote and directed. Or at least the ones that I think he directed; Keystone didn’t give directing credits. I used two online sources, Wikipedia and the Internet Movie Database, to assign those credits. 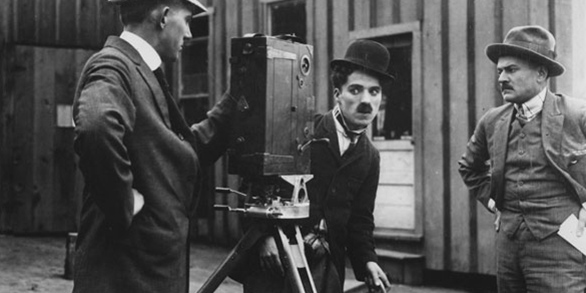 The Keystone films, with or without Chaplin, haven’t aged well. They’re crude, cheap, overacted, and only seldom funny. But they’re a useful record of Chaplin as he grew as an artist.

I streamed most of the movies via Fandor. The single exception, The Rounders, I watched off a DVD; it’s in the Slapstick Encyclopedia collection. I’ll use the name Charlie to refer to his famous character, and Chaplin for the artist.

Twenty Minutes of Love: I didn’t laugh once at Chaplin’s directorial debut, one of many Keystones about people flirting in the park. Charlie is simply mean. Chaplin, along with the rest of the cast, horribly overacts. The best thing about Twenty Minutes of Love is that the movie only lasts ten minutes.

Caught in the Rain: Before his film work, Chaplin gained fame on in British Music Hall doing a drunk act, and he does it here. But the funny gags are rare, and again, he’s a jerk.

A Busy Day: In this very short (six-minute) movie, Chaplin skips the Charlie character and plays a woman – and a mean one at that. Laughs are rare.

Her Friend the Bandit: I couldn’t see this one; it’s lost.

Mabel’s Married Life: This one starts as another flirting-in-the-park comedy, but Chaplin’s talent blossoms in the last few minutes, as a drunk Charlie tries to argue with, and then fight with, a boxing dummy. Very funny. It co-stars Mabel Normand and Mack Swain; always welcome faces when you’re looking for laughs.

The Property Man: Chaplin’s first two-reeler is twice as long as his previous films, but that doesn’t bring more laughs.

The Face on the Barroom Floor: This parody of John Henry Titus’s poem is actually funny. For the first time, Chaplin asks for our sympathy, and Charlie is clearly a tramp.

Recreation: Another unfunny movie of people flirting in the park.

The Masquerader: Chaplin plays himself in a movie set at Keystone studio. We see him put on the Charlie costume and makeup. He steals things from dressing room partner Fatty Arbuckle. He flirts when he should be working, and he turns up disguised as an attractive woman. Even playing himself, Chaplin comes off as a real jerk. But it has some pretty-good gags that give promise of the great works ahead.

His New Profession: Charlie is annoying and unfunny as he doesn’t even try to take care of a man in a wheelchair.

The Rounders: One of his best Keystones. Chaplin and Arbuckle, two of the greatest silent comedians, play drunks. That’s funny enough.

The New Janitor: This one points to is later, better work. It has a good, solid, melodramatic story, as well as a romantic subplot. And Charlie saves the day! Chaplin seems to be thinking about story.

Those Love Pangs: But not for long. Another not-funny flirting in the park movie.

Dough and Dynamite: Chaplin’s second two-reeler is set in a bakery café, and involves evil bakers on strike. A young Charlie Chase shows up in a small part. I chuckled a couple of times.

Gentlemen of Nerve: The usual flirting and fighting, this time set at a race track instead of a park. With Mabel Normand and Mack Swain, but no laughs.

His Musical Career: Not worth talking about.

His Trysting Places: Yet another worthless movie about flirting in the park.

Getting Acquainted: Another day of flirting in the park. Were public parks the 1914 equivalent of Internet dating sites?

His Prehistoric Past: Charlie in a bearskin (along with the trademark hat, cane, and shoes) fights with other men over women. I laughed once, when he picked up a small rock and, striking it like a match, lit his pipe.

Next up, Chaplin’s year at Essanay. There he will build his team, gain greater control, and began to discover much more about this Charlie fellow.