Richard Linklater blew me away with three great films in a row: Bernie, Before Midnight, and Boyhood – especially Boyhood. I eagerly looked forward to what he would do next.

I recently got a chance to find out. Linklater’s latest film, Last Flag Flying, is a disappointment. It’s not bad, but it’s considerably less than one would expect from Linklater. I guess you can’t expect any artist to create four masterpieces in a row.

Last Flag Flying is sort of, kind of, but not quite a sequel to a 1973 film called The Last Detail. That earlier film concerns three sailors who are lucky enough to not be in Vietnam – although one of them is very unlucky. The later film follows three veterans who haven’t seen each other in 30 years. The characters seem very much like the people we met in The Last Detail, with three additional decades of life experience behind them (Last Flag Flying is set in 2003). Both films are essentially road pictures.

But they’re not really the same characters. Their names are different. Only one is a sailor; the others are marines. They all fought together in Vietnam.

Both films are based on novels by Darryl Ponicsan. I haven’t read them. 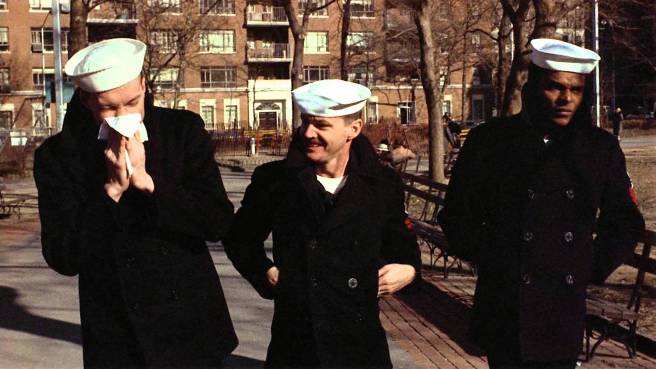 I saw this film when it was relatively new. I recently revisited it, knowing that I would soon see Last Flag Flying.

Two Navy officers (Jack Nicholson and Otis Young) must take a young sailor to prison. His eight-year sentence is absurdly harsh for the crime. The trip will take several days.

Randy Quaid carries the story and breaks your heart as the prisoner. He’s sweet, trusting, and naïve. He’s a kleptomaniac, and that has now ruined his life. His two guards come to care for him, and try to give him a good time on the way. Among other things, they make sure he doesn’t go to prison a virgin. What eight years of prison will do to this sweet and innocent guy makes you shutter.

Nicholson plays the ultimate Nicholson role. He’s a rebel with a short fuse. He’s emotional, angry, and feels guilty about what he’s doing. Young’s character shares the guilt and doesn’t like the job, either. But he’s calmer and more practical.

I give The Last Detail an A.

The film’s quality shouldn’t be surprising. Robert Towne adapted Ponicsan’s book into a screenplay, and Hal Ashby directed. When it comes to ’70s credits, you don’t get better than that. 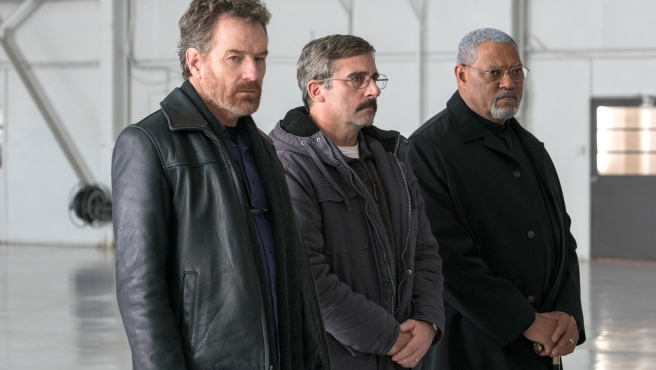 Richard Linklater directed the new film, from a screenplay he co-adapted with Ponicsan. That should promise quality every bit as much as Towne and Ashby. But this time, the promise doesn’t come through.

Three veterans who haven’t seen each other in some 30 years get together when one of them desperately needs help. They spend days traveling the East Coast and once again get to know each other.

Bryan Cranston plays the Nicholson analogue – a transplanted New Yorker and alcoholic running a not-too-successful bar. Laurence Fishburne’s character, an older version of Detail’s Young, has found Jesus and is now a reverend.

Steve Carell’s “Doc,” the Quaid analog, is still the one you care most about, and yes, he spent some time in the brig. But after his dishonorable discharge, he found true happiness in a good marriage. Then, suddenly, everything fell apart. His wife died of cancer, then his son, also a Marine, was killed in Iraq. Doc finds his old buddies on the Internet and asks them to help him bury his son.

Last Flag Flying has many wonderful scenes that deepen the characters and show how they have changed over the years, while in some ways still being the same people. It also comments on American military fetishism; for every fallen soldier, there’s a fictional story of heroism beyond the call of duty.

But the film has more pointless scenes than good ones. Plot threads come and go without making a point. Since the tragedy (the son’s death) has already happened, there’s no suspense. The film drags.

I can’t give this film more than a B-. For a Linklater film, that’s a major disappointment.