A- Drama
Written and directed by Francis Lee

A young man living a miserable existence finds love and happiness, if he can hold onto them – and hold onto the lover who opens up his world.

Johnny (Josh O’Connor) works hard on his family’s sheep farm in a very rural piece of northern England. His parents speak to him only to tell him what he’s doing wrong. His father is disabled, and can’t help much. His mother sticks to the household chores. Apparently, there are no other siblings.

For an escape (I’d hardly call it fun), Johnny frequents the local pub, where he drinks and has fast, meaningless sex with men he doesn’t want to know. He doesn’t seem to get much pleasure out of it.

If this sounds like a drearily depressing film, it is…at first. But things change.

Gheorghe knows about a lot of things other than sheep – including sexual intimacy. Johnny falls in love for the first time in his life. And Gheorghe falls in love with Johnny. (Johnny doesn’t seem like a great catch for the gorgeous and relatively worldly Gheorghe; maybe the options are limited in that part of the world.) 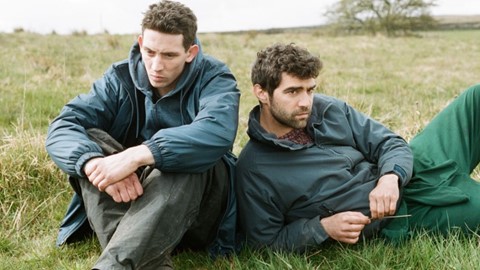 The plot is somewhat like the French lesbians-on-the-farm movie Summertime, but with very different takes on agricultural life. The French film made country life feel idyllic; Johnny’s farm is dreary weather and hard work. Mud must be scraped off everything. Animals get sick and die. Sticking your arm into a cow’s anus is just another part of the job.

But as Johnny and Gheorghe fall in love, the work seems easier and the farm looks lovelier. When Gheorghe cries out that a view is beautiful, it is. In the end, I’d have to say that God’s Own Country is a much more optimistic film than Summertime.

If you’re not familiar with some of the more esoteric, rural British accents, you may have difficulty following some of the dialog in God’s Own Country. It took a while before I could catch most of what the characters say. Oddly, the one character I could always understand was Gheorghe. That shouldn’t be too surprising; he learned to speak English in Romania, not northern England.

There’s a lot of male nudity and male-on-male sex in the film, and it would be a weaker movie without it. It’s necessary as Johnny learns the difference between sex and love. He must also learn to be his own person, although he does that with his clothes on.

God’s Own Country has one major flaw: an obvious third act that feels just a bit forced. And yet, even that works.