B Documentary
Directed by Brett Morgen

You probably already know about chimpanzee expert Jane Goodall. In 1960, without a college degree and only in her mid-20s, she went to Africa to study our closest evolutionary cousins. What she discovered astounded the world.

Brett Morgen’s new documentary, simply titled Jane, allows Goodall to tell her own story – about her work, her marriage, her son, and the fascinating creatures to which she has devoted her life. Goodall narrates the film, and no one else is interviewed. Even her son, now a man of 50, doesn’t describe his childhood, moving back and forth between African research stations and British boarding schools. Goodall only refers to him by his childhood nickname, Grub. (Neither of her husbands survive.) Also, none of the African helpers appear to have names. 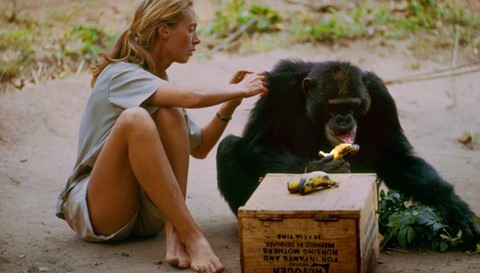 But even from one point of view, it’s a great story. She lived in the Gombe forest for five months before the local chimps lost their fear of her. Once that happened, she could study how they ate, argued, mated, played, and raised their children.

She made one Earth-shattering discovery early on: She saw chimps stripping leaves off twigs so they could use them to fish for termites. Up until this discovery, it was universally assumed that only humans make tools.

Of course, many rejected the discovery. After all, it was made by a young, attractive blonde who hadn’t even attended college.

After her discovery, National Geographic (which is releasing this documentary) sent photographer Hugo van Lawick to capture her work and discoveries on film. Romance blossomed, and Van Lawick became her first husband and the father of Grub. They would eventually divorce.

The story of this band of chimps covers much of the film’s running time, involving love, drama, tragedy, and violence. A young mother raises her child with love and affection. Polio hits the tribe. And Goodall discovers that chimpanzees, intelligent and emotional creatures, are no better than humans; their tribal wars are ruthless and genocidal.

Most of what we see in this documentary comes from Van Lawick’s cameras, and much of the footage was found and restored. The images are remarkable and often stunning in their immediacy. Of course, it’s very old 16mm film, blown up to fit the wide screen, so you should expect low resolution. The color is stunning, if not always natural-looking. 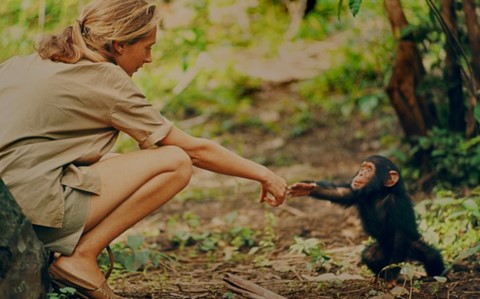 Jane concentrates on Goodall’s early work in the 1960s and early ’70s. The picture goes quickly through the next 45 years. Her second marriage is never mentioned.

Philip Glass’ musical score hurts the film badly. Loud and bombastic, it gets in the way more often than as it enhances the story.

This is clearly Goodall’s version of what she wants to tell us. She’s had a remarkable life, and much of it was well photographed. But I wanted to know more about what others thought of her.