Human beings and rats have lived together, seldom harmoniously, since the invention of agriculture. Theo Anthony’s documentary examines the eternal battle, focusing on one particular battleground: Baltimore. But it doesn’t go very deep into the antagonist relationship.

A film like this needs multiple interesting and knowledgeable characters. Rat Film only lets you get to know one: professional exterminator Harold Edmond. Old and very experienced, Edmond knows how rats think. Early on, he tells us that Baltimore doesn’t have a rat problem; it has a person problem. 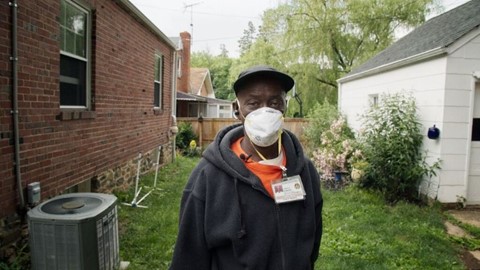 Other, more amateur rat killers, aren’t as wise. Two young men go “fishing” for rats – using a fishing pole, bait, and a baseball bat. Another young man hunts rats with a selection of scary-looking pellet guns. Not surprisingly, this young man, unlike Edmond and the fishermen, is white. Police would probably shoot a black man carrying all those guns before they discovered that the “perp” was hunting rats.

Rat Film doesn’t spend much time on pet rats, but it spends some. We see a man look straight into the camera, playing music, while his furry friends sit on his shoulders. In a longer sequence, a couple explain how they rat-proof their living room before letting their pets out of the cage. 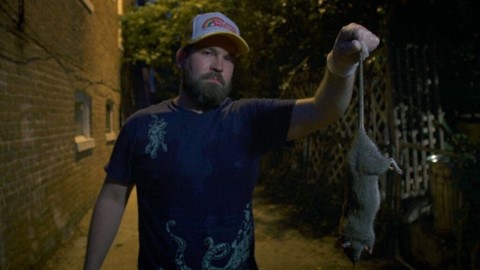 Other pet lovers use baby rats (and baby mice) for another purpose: snake food.

Occasionally, the film steps out of Baltimore to discuss experiments on rat behavior and population control. Apparently, rat poison doesn’t do any good in the long run; it just makes room for more living rats.

But oddly, Rat Film ignores some of the more interesting findings about our urban neighbors. For instance, we know now that rats feel empathy for other rats, but you’d never know from this movie.

The documentary occasionally steps into subjects that have nothing to do with rodents. For instance, the filmmakers appear to have fallen in love with a virtual, 3-D replication of Baltimore. It doesn’t show anything that couldn’t be seen from a live-action camera; in fact, it shows considerably less. 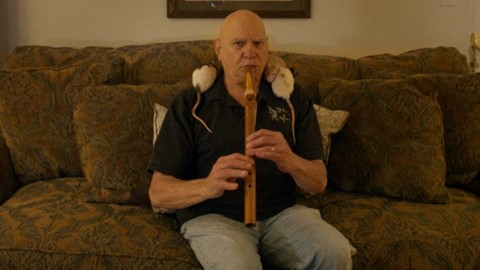 Rat Film sometimes detours into a subject far more interesting and important than our long-tailed advisories: redlining. In these sequences, the narrator cooly explains how laws and real estate contracts kept people of color down economically. Only white people could buy homes in neighborhoods where properly values were likely to go up. Redlining has been illegal for decades, but its effects are still with us.

The film never mentions the connection between redlining and rats – perhaps because it’s so obvious. The redlined districts, always ignored by city health officials, tend to have more rats. 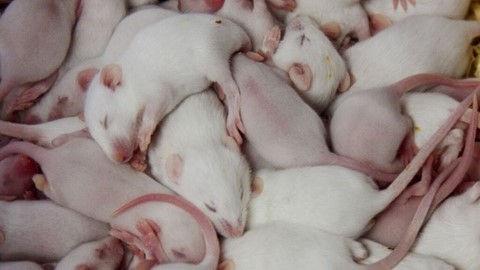 Aside from redline issues, Rat Film shows us how cities and people keep rats at bay. It explains what makes a good rat poison (it needs to attract rats, and not kill larger mammals), and how you make an environment where rats are unlikely to thrive. Oddly, cats are never discussed.

I would have liked more from the rats’ point of view.