Director Howard Hawks proved his talent in many genres, including westerns. He made four of them, and the first two, Red River and Rio Bravo, are masterpieces. Both belong on my A+ List of all-time greats.

And yet, they’re so different that it’s hard to imagine they were made by the same director. Red River is an epic tale set across 13 years and hundreds of dangerous miles. Rio Bravo, on the other hand,
is a chamber piece, set in one town over the course of three days, with enough humor to remind you that Hawks was a master of screwball comedy.

I’ve already written about Red River; you can read my Blu-ray review and my Book vs. Film essay. So this time, I’ll tell you why Rio Bravo is a great western…and a great film. 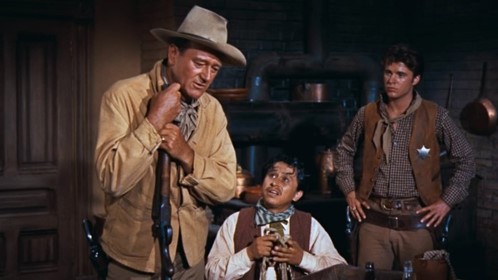 You can also check out my A+ Table of Contents for other films I’ve loved for decades.

Rio Bravo starts with a daring piece of filmmaking that proves you’re in the hands of a master. After the opening credits, Hawks gives us – in the space of about three minutes – a contained story that sets up two major characters and provides much of the backstory. And it’s all done without dialog.

Then the real story begins.

The setup: A no-good jerk casually murders someone in cold blood, and the sheriff duly arrests him. But the killer is part of the rich Burdette family, and his much smarter brother will do anything to free his sibling. Soon hired killers are turning up in town.

Hawks plays this basically tense situation with a light touch. Yes, there are moments of considerable suspense. But these are carefully leavened with warm, light-hearted comedy. When not in danger, everyone seems to be having fun. There’s even a musical interlude.

The hero is sheriff John T. Chance, played by John Wayne in one of his warmest and most likable performances. At times, he’s downright cuddly. He knows what must be done and sticks to it, but he’s also a friend to everyone in town. He shows real concern for his deputies – old friends that he clearly loves.

Foremost among them is Dude (Dean Martin), a once-brilliant gunfighter destroyed by booze. Throughout the course of the story, he’s sobering up and struggling with the DTs. Chance’s concern and love for Dude shows in every scene they have together – even though the love is often of the “tough” kind. (The characters, and possibly the filmmakers, seem to think that beer is okay for a recovering alcoholic.)

Walter Brennan, at his most cackling, plays the other deputy, Stumpy. Much older than the others and walking with a severe limp, he’s not much good in a fight. But he’s stubborn and hates the Burdette family with a passion.

So we have one sheriff and two problematic deputies going against a large posse of hired guns.

Hawks planned Rio Bravo, in part, as a response against High Noon. In that earlier film, the sheriff tries to raise a posse among the town’s menfolk, and finds that none have the guts to back him up. In Rio Bravo, Chance refuses help from friends and townspeople. The “well-meaning amateurs” would only be “more targets to shoot at.”

But there’s one potential deputy passing through town: Colorado, played by Ricky Nelson (of Ossie and Harriet and early rock and roll fame). He plays a variation on that common western type, “the kid.” Only this kid is as cool as a cucumber, a brilliantly fast quickdraw who feels no need to prove himself. 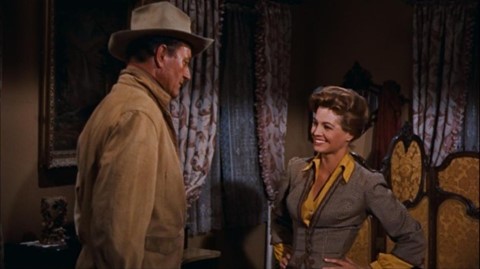 Like most westerns of its time, the cast is male heavy. Of the ten credited actors, only two are women. One of those is Angie Dickinson as a gambler who comes into town and falls in love with Chance. Her scenes with Wayne play like screwball comedy, with her making all the moves and him becoming increasingly flustered. To watch these scenes is to wish that Wayne had done more comedy.

Rio Bravo is not a serious western. It doesn’t celebrate the pioneers that made America. It doesn’t study how violence makes or unmakes a man. It doesn’t try to feel like history. But it’s the most entertaining and enjoyable western I’ve yet to see. And, like so many other Hawks films, it celebrates professionalism, and the bond that develops between people who work together.

I’ve mentioned Hawks a lot in this article, but he didn’t make the movie alone. Jules Furthman and Leigh Brackett – both masters – wrote the screenplay, based on a short story by B.H. McCampbell. Dimitri Tiomkin composed the music, including the songs that Martin and Nelson sing. 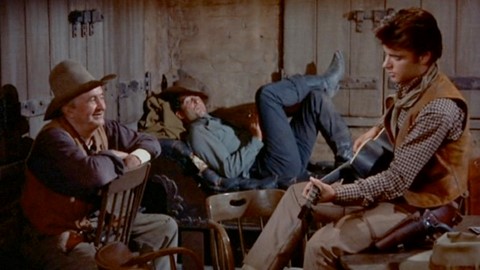