Going to the movies in the summer usually means brainless superhero movies. But thanks to the Pacific Film Archive, you can have far better options.

Yes, I know that we’re all supposed to call it BAMPFA now, but I prefer the traditional name, or PFA for short.

Whatever you call it, UC Berkeley’s art house cinema announced its summer schedule last week. And as usual, there’s a lot to look forward to.

Here are some of the series running from June through August.

Women’s Troubles: The Films of Pedro Almodóvar, July 27–August 31
This series on the great Spanish auteur concentrates on his films about women – of which there are some considerable greats. It starts with his American breakthrough, Women on the Verge of a Nervous Breakdown, but also includes What Have I Done to Deserve This?, All About My Mother, Talk to Her, and his recent Julieta (read my review).

Melville 100, June 8–August 12
Jean-Pierre Melville was born in 1917, so this is the year we celebrate his films. I must admit, I have only seen one of them, the excellent Army of Shadows, based on his own experience in the resistance. Other films on the list that I really should see, include Le Samouraï and Bob le flambeur. 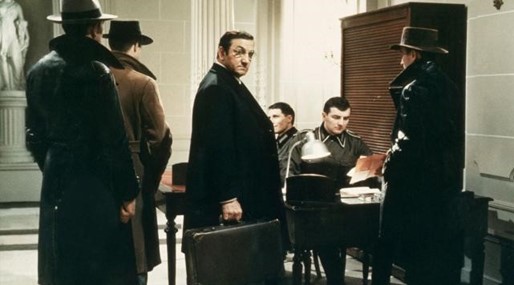 Auteur, Author: Film & Literature, May 31–June 4
This five-day series, which conflicts with the San Francisco Silent Film Festival, looks at films based on novels. It starts with Philip Kaufman’s remake of Invasion of the Body Snatchers, which is kind of weird because it’s far more influenced by Don Siegel’s 1956 movie than by Jack Finney’s novel. Kaufman will be present. Other films in the series include Tarkovsky’s Stalker and Mishima: A Life in Four Chapters.

Invasion of the Body Snatchers

Band of Outsiders: Women Crime Writers, June 29–August 17
A good excuse for another noir series – crime films based on novels written by women. The selection includes several greats: Strangers on a Train, Laura, In a Lonely Place, and the lesser-known but still very good Don’t Bother to Knock. But the concept begs an interesting question: If you want to celebrate women writing about crime, why not show crime films written by woman screenwriters.

Strangers on a Train

Terence Davies: Cinema, Memory, Emotion, August 19–27
I’m not familiar with Davies’ work, so I’ll make no comments about this series. For those of you who do know his work, the series includes Distant Voices, Still Lives, Of Time and the City, The Long Day Closes, and his new film, the Emily Dickinson biopic, A Quiet Passion.

Summer Repertory, BAMPFA Style, June 6–August 27
This series isn’t really a series. It’s just a selection of really good (I assume) films that deserve to be screened. Most of them come from the PFA’s own selection. The ones I know are good include Meek’s Cutoff, The Mill and the Cross, and
Shadows of Our Forgotten Ancestors.

The Mill and the Cross

So what are you going to see this summer? Intelligent, thoughtful, and entertaining cinema, or some fools in spandex.