B+ Documentary
Directed by Steven Okazaki

If you have any interest at all in Japanese cinema, you’re bound to enjoy Mifune: The Last Samurai, a love letter to the legendary movie star. Even if you already know a great deal about Toshiro Mifune, you’ll probably learn something new. For instance, I discovered through this film that shooting Throne of Blood‘s climax was even more dangerous than I’d otherwise believed.

Steven Okazaki’s biographical documentary concentrates on the actor’s samurai movies–especially those directed by Akira Kurosawa. Aside from Hiroshi Inagaki’s Samurai Trilogy, no non-Kurosawa films get significant coverage. The same goes for Kurosawa’s contemporarily-set movies. Even Drunken Angel, their first collaboration and the film that made Mifune a star, gets passed over quickly.

The documentary begins with the birth of the Japanese film industry, long before Mifune ever stepped in front of a movie camera. We learn about samurai films of the silent era, where the hero never gets the girl and seldom survives. From there the film hops to World War II, and Mifune’s role in the military, training kamikaze pilots.

According to legend, Toshiro Mifune became an actor by mistake. After the war, he went to the Toho studio searching for a job as a camera assistant, but he got into the wrong line and ended up making a screen test. Drunken Angel was his third film.

Okazaki identifies the 1950s and early 60s as the golden age of Japanese film–an opinion I generally agree with. The documentary examines such Kurosawa classics as Rashomon, Seven Samurai, and Yojimbo, with an emphasis on Mifune’s character and performance.

After Red Beard
(1965), Mifune and Kurosawa went their separate ways, ending what was arguably the greatest collaboration of actor and auteur in film history (my opinion, anyway). No one knows for sure why they stopped working together. Martin Scorsese, interviewed in the film, offers the best theory: Collaborators grow apart, and find they can’t work together anymore. (I couldn’t help wondering if he was thinking of his own professional relationship with Robert De Niro when he said it.)

Mifune struggled without Kurosawa. He created his own production company, but that became an albatross around his neck. He was caught up in a sex scandal. He died of Alzheimer’s at the age of 77. 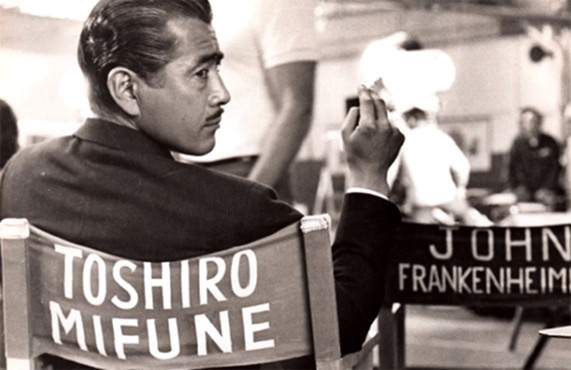 Stylistically, Mifune: The Last Samurai looks like any other documentary about recent history. It has newsreel clips, scenes from movies, stills from other movies, and interviews with people who knew the man. His son Shiro does a great deal of the talking (the film is narrated by Keanu Reeves). Other actors and crew members who worked with Mifune, as well as Scorsese and Steven Spielberg, add their own memories and opinions.

When you see the movie, stay through the closing credits. You’ll be rewarded.