You’d expect a book on the history of Pixar to include lots of drawings, models, and frame blowups. But you’ll find only words in Lawrence Levy’s To

Pixar and Beyond: My Unlikely Journey with Steve Jobs to Make Entertainment History.

But then, To Pixar and Beyond is not about animation, design, or storytelling. It’s not even about technology. It’s about money, and its arguably evil twin–the stock market. And yet, if you’re interested in animation, technology, or the movie industry, it’s worth reading.

Levy, a lawyer and a businessman, became the animation company’s Chief Financial Officer (CFO) early in 1995. Steve Jobs, exiled from Apple and the sole owner of Pixar, picked Levy for the job of making the company profitable. The book doesn’t discuss how Pixar creates movies, but Levy clearly respects what he describes as “a level of creative and technical wizardry that I could never have imagined.”

1995 was an important year for Pixar, then a 16-year-old company breaking down barriers but losing money. They were busy finishing their first feature, Toy Story, due for release Thanksgiving week. But their contract with Disney, which financed the film, made future profits almost impossible. Levy’s job was to learn Hollywood’s financial structure, re-negotiate Disney’s contract, and set up an initial public offering (IPO).

Most of the book covers that important year. While Toy Story director John Lasseter and his team struggle to get the movie ready, Levy prepares the IPO. Neither task was easy. Toy Story was the first feature-length computer-animated picture; no one knew if audiences would accept a new type of movie.

Jobs pushed Levy to make the IPO happen as soon as possible. The book paints a surprisingly positive portrait of Jobs, with whom Levy developed a close friendship. Levy acknowledges the sociopathic Jobs that other employees knew; it just wasn’t his experience. On his first day at the studio, an employee told him that “Pixar lives in fear of Steve.”

Steve Jobs, from Alex Gibney’s documentary Steve Jobs: The Man in the Machine

Levy may be a lawyer, but he doesn’t write like one. His clear, easy-to-read prose help explain a lot about how money works. He describes IPOs, stock options, contract details, and the market in general in ways that make it clear to people who can barely balance a checkbook. He has an entertaining gift for metaphor, telling us that a Disney executive “was handing me a lifeline, and apologizing because it wasn’t in my favorite color.”

Toy Story made its Thanksgiving deadline, and the IPO happened the same week. That was fortuitous. The movie was an immediate hit of huge proportions, and everyone wanted a piece of Pixar. It was that IPO, and not Apple, that made Steve Jobs a billionaire. 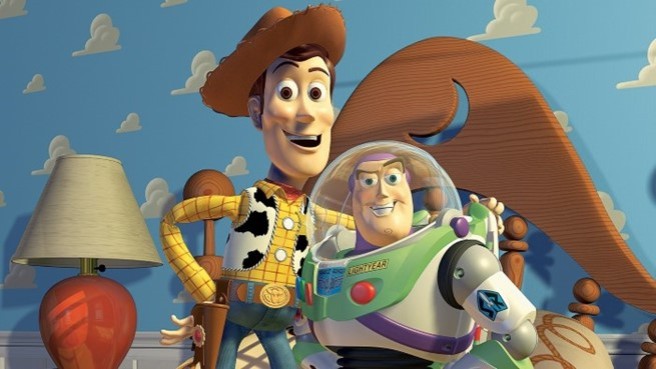 The simultaneous premiere and IPO also gives the book a spectacular happy ending–only two thirds of the way through. Then we follow Levy as he helps Pixar mature. He arranges a new contract with Disney, gives Lasseter and the rest of the creative team artistic freedom, and eventually sells Pixar in a way that makes everybody happy.

Levy goes off the deep end in the last three chapters, telling us about his discovery of Eastern spiritual practices. I have nothing against his religion, but it seemed out of place in this book.

I write about technology and cinema, and To Pixar and Beyond didn’t tell me anything I didn’t already know about either of these subjects. But it taught me a considerable amount about the finances that make technology and cinema possible. I enjoyed the book. And yet…as I read about IPOs and contract negotiations, I kept wanting to sneak into another room and watch Lasseter finish the final touches to Toy Story.