Written by Hannes Holm, from a novel by Fredrik Backman

Even the most warn-out, commercial plots can work when the filmmakers do something original with them. And that’s very much the case with this dramatic comedy from Sweden.

Consider the cliché of the crotchety old man who hates everybody, until good-hearted people melt his resistance and remind him what love and community are all about. Writer/director Hannes Holm makes this overused device new again by adding a very real sense of darkness, and a deep understanding of the inevitable tragedy of human life.

He also makes the film, when appropriate, very funny. 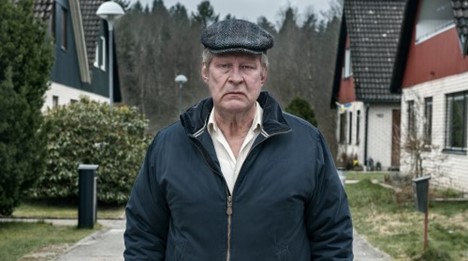 When we first meet Ove (Rolf Lassgård), he lives by himself in a condominium within a gated community. He boils with anger at every minor transgression of the community’s rules. He threatens cats and small dogs.

He shows tenderness only to the dead. He visits his wife’s grave every day.

He’s already mad at the world when, early in the film, something happens that gives him something to be mad about. He’s fired from his job after decades of service.

With apparently nothing else to look forward to, he attempts suicide. Several times. But every time he tries, something–usually other people–interferes. He finds himself reluctantly helping them instead.

These suicide attempts also launch many of the film’s several flashbacks. Holm and cinematographer Göran Hallberg bathe these scenes of Ove’s youth in a nostalgic glow, and show much of what had been wonderful in his life. His widowed and working-class father loved him and taught him not only a sense of right and wrong, but also the mechanical and carpentry skills that would serve Ove throughout his life. He had a long and very happy marriage to a wonderful and generous woman who loved him deeply. 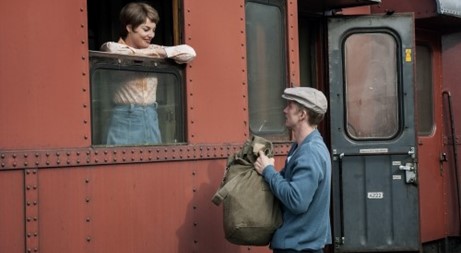 But the flashbacks also showed the many losses in his life. Tragedy, in the form of horrible accidents, destroyed much of his happiness. And as a builder who could work wonders with his own hands, he learned to hate the “white shirts” who always found ways to take away what he had created.

When he’s not remembering the past or trying to kill himself, he’s reluctantly spending time with other people in his community–especially the family that just moved in. It’s a mixed-race family, with a white husband, an Iranian wife, and two adorable daughters. Another child is on the way.

The very pregnant mother, Parvaneh (Bahar Pars), becomes the major force to bringing Ove back into the human race. She’s open, friendly, and cheerful. After her husband is injured in a domestic accident, she keeps coming to Ove for help, and much to his surprise, he provides it. Much against Ove’s own wishes, the kids bond with him. 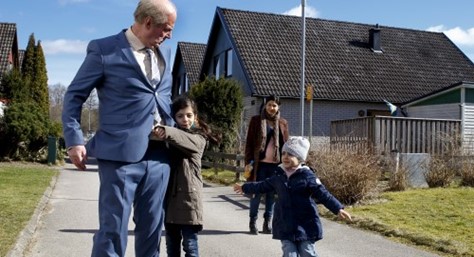 The concept of modern Sweden as a melting pot is a minor theme here. Grumpy as he is, Ove never once uses a racist slur. He reluctantly takes in a young, brown-skinned gay man who has been thrown out by his homophobic father.

The best feel-good movies have a dark and disturbing core. Consider It’s a Wonderful Life. A Man Called Ove, with its disappointing ending, doesn’t reach the magic of Frank Capra’s masterpiece. But the film shows us the inevitable tragedy of human life and the ability to heal–and all done with good, dark humor.