The Roxie‘s Mad Men Weekend–four films over three days–doesn’t quite qualify as a film festival, but it comes close. The films, all made in the 50s and 60s, allegedly influenced Matthew Weiner’s television drama. Serena Bramble, author of Mad Men Carousel: The Complete Critical Companion, will be on hand for each screening.

And now, some movies:

Heath Ledger turns the stereotype of the strong, silent cowboy on its head, playing a man so beaten down and closed off from the world that every word is a struggle. Unable to come out of the closet, he can’t openly acknowledge who he really is without rejecting another, equally important part of his identity–the strong, manly cowpoke. Jake Gyllenhaal and Michelle Williams are also brilliant as his lover and his wife. One of only a handful of films that significantly changed society for the better. 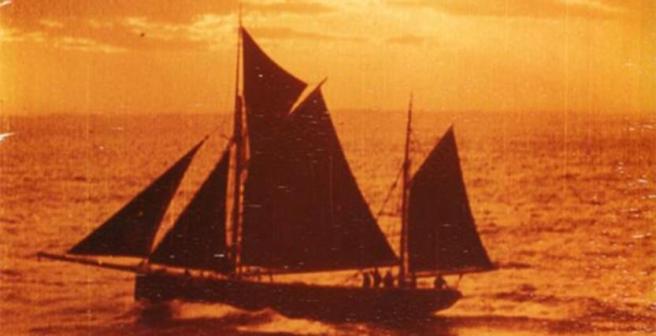 Senior Film Curator Susan Oxtoby will present a lecture/demonstration on the beautiful visuals of tinted nitrate prints from the early days of silent film. “This is an emotional approach to film history, an investigation of mood that is only enhanced by traces of decay and disintegration.” Sadly, no actual nitrate film will be screened–probably because it’s a fire hazard.

Here’s a children’s masterpiece from France that doesn’t need subtitles. I first saw The Red Balloon in a museum screening at a very young age, and it stunned me with its wit, charm, simple story, and semi-sad ending–I hadn’t realized such a thing was possible. Director Albert Lamorisse uses visuals, music, and sound effects to tell his story of a young boy and his loyal pet balloon. The result is 34 minutes of pure charm–admittedly, not enough for a full feature. I don’t know what else the Balboa will screen to fill out the experience. Read my full review. 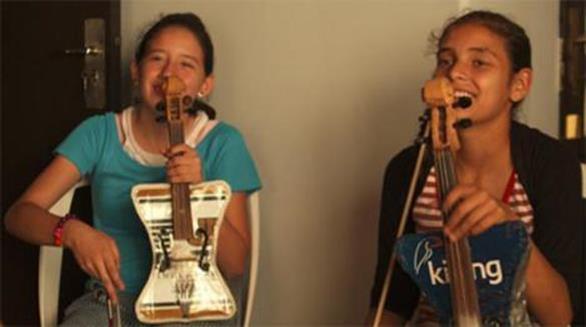 Cateura, Paraguay is not really a town; it’s more of an inhabited garbage dump. But out of that dump comes beautiful music according to this inspiring documentary. Environmental engineer turned music teacher Favio Chávez put together a young people’s orchestra playing home-made instruments built from recycled materials. The group gains Internet fame, accompanies Megadeth in concert, performs around the world, and enjoys some relief from grinding poverty. You can’t watch it without rooting for these children, and for the adults shaping their lives. The screening will be preceded by a live musical performance by children from San Rafael’s Enriching Lives Through Music.

Burt Lancaster risked his career to produce this exploration of the seamy side of fame. He plays New York gossip columnist J. J. Hunsecker–a truly repellent and despicable person who happily bathes in the adulation and fear of those around him. Tonight’s main victim: a whinny Broadway press agent desperate to get his client into Hunsecker’s column (Tony Curtis in a great performance). To make things worse, Hunsecker–who’s based loosely on Walter Winchell–has a rather too-close relationship with his kid sister. From a script by Clifford Odets and Ernest (North by Northwest) Lehman. Part of the Mad Men Weekend. 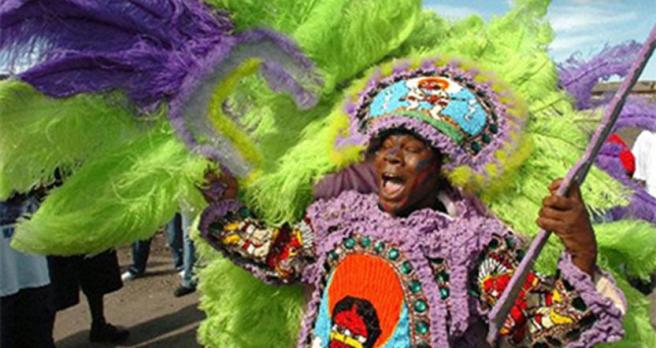 Three movies–none quite feature length–from the great, late East Bay documentarian. I saw Garlic is as Good as 10 Mothers ages ago and barely remember it. I’ve yet to see Yum Yum Yum. But I’m tempted to give the whole triple feature an A based entirely on Always for Pleasure, a 58-minute celebration of New Orleans street parades–not just during Mardi Grass, but after funerals, on St. Patrick’s Day, and just about any occasion. You can read my longer discussion.

B The Fifth Element, Clay, Friday and Saturday night, 11:55PM (just before midnight)

This big, fun, special effects-laden science-fantasy adventure refuses to take itself seriously. It never manages to be particularly exciting, but it succeeds in being rousing and intentionally funny eye candy. It’s also one of the few futuristic movies that’s neither utopian nor dystopian, making it feel–for all the silliness of the plot–relatively realistic.

Billy Wilder won a Best Picture Oscar for this serious comedy about powerful men exploiting both attractive women and their male underlings. Jack Lemmon gave one of his best performances as a very small cog in the machinery of a giant, New York-based insurance company. In order to gain traction in the rat race, he loans his apartment to company executives—all married men–who use it for private time with their mistresses. With Fred MacMurray as the top exploiter and Shirley MacLane as the woman he exploits and Lemmon loves. Read my Blu-ray review. On a Mad Men Weekend double bill with The Swimmer.

B- To Catch a Thief, various CineMark theaters, Sunday (matinee only) and Wednesday

More like a vacation on the Riviera than the tight and scary thriller one expects from the master of suspense. Not one of his best by a long shot, To Catch a Thief nevertheless provides a few good scenes and sufficient fun. Besides, 106 minutes of Cary Grant and Grace Kelly in Monaco, photographed in the beauty of VistaVision, can’t be all bad.

Make no mistake; this ground-breaking movie is brilliant but simplistic Communist propaganda. The workers and sailors are all good comrades working together for a better world. The officers, aristocrats, and Cossacks are vile filth who deserve to die. A couple of them are so evil they actually twirl their mustaches. And yet, the story of mutiny, celebration, attack, and escape stirs your blood. And it does this primarily through editing techniques that were revolutionary in 1925 and still impressive today. The Odessa Steps massacre is still amongst the greatest action sequence ever edited. Read my essay. The PFA will screen the film with the recorded Edmund Meisel score on the new 35mm print.

B- Rebecca, Yerba Buena Center for the Arts, Thursday, 7:30

With its few fleeting moments of suspense, Alfred Hitchcock’s first American film doesn’t feel like one of his usual thrillers. Basically a weepie, it stars Joan Fontaine as a young American who marries a British aristocrat (Laurence Olivier), only to find that she must compete with the memory of his dead first wife. This entertaining melodrama includes a fine, over-the-top performance by Judith Anderson as the brooding servant who cannot bear to accept the usurper who has replaced her lady. This was Hitchcock’s only Best Picture Oscar winner, which just goes to show you how silly the Oscars can be. Part of the series Gothic Cinema. 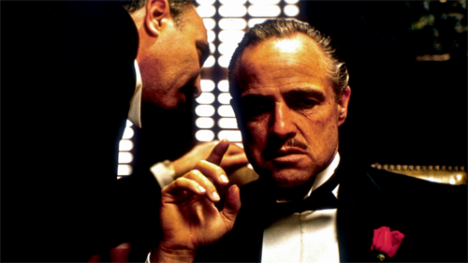 Francis Coppola, taking the job simply because he needed the money, turned Mario Puzo’s potboiler into the Great American Crime Epic. Marlon Brando may have top billing, but Al Pacino owns the film (and became a star) as Michael Corleone, the respectable youngest son reluctantly and inevitably pulled into a life of crime he doesn’t want but for which he proves exceptionally well-suited. A masterpiece of character, atmosphere, and heart-stopping violence. Read my A+ list essay. Preceded by The Kid Stays in the Picture, a feature-length documentary that partially covers the making of The Godfather. Warning: This is going to be a very late night at the movies.

A knight (Max von Sydow) returning from the Crusades plays chess with Death (Bengt Ekerot) while the plague ravages the land. But while the knight thinks about eternity, his life-embracing squire (Gunnar Björnstrand) reminds us what it really means to be human. Filled with wonderful characters, religious allegory, and sly humor, it bursts with a love of humanity and a fear for our place in the universe. Yes, it’s the often-parodied Ingmar Bergman movie that became the cliché of 1950s European art films, but that never would have happened if it hadn’t been so good. Introduced by Barbro Osher and Linda Haverty Rugg. New 35mm print.

One of Hitchcock’s best. In order to prove her patriotism, scandal-ridden Ingrid Bergman seduces, beds, and marries Claude Rains’ Nazi industrialist, while true love Cary Grant grimly watches. Grant sent her on this dangerous and humiliating mission. And as she sleeps with the enemy on his orders, he reacts with blind jealousy. The Nazi, on the other hand, appears to truly love her. Sexy, romantic, thought-provoking, and scary enough to shorten your fingernails. I discuss the film more deeply in my Blu-ray Review. On a double bill with The Philadelphia Story.

Janis Joplin’s voice seemed to come out of nowhere. But in reality, it came out of the pain and joy and despair and sexuality of a young woman brimming with so much emotion that you felt she might explode. If you’ve ever loved Janis Joplin’s work, this film will reignite that love. If you don’t understand what she was all about, it makes a great introduction to one of the best and most influential performers in popular music. Filmmaker Amy Berg put together a touching documentary that finds the right interviews and keeps the music front and center. Read my full review.