How do you top Some Like It Hot? Billy Wilder found the answer in The Apartment, a far more serious comedy about the battle of sexes. Or more precisely, about how powerful men exploit both women and less-powerful men. When The Apartment came out in 1960, critics complained that Wilder didn’t seem to know if he was making a comedy or a drama. They were right about the confusing balance of genres, but wrong on a far more important level: What they saw as a fault looks today like a virtue.

And it looked that way to a great many people in 1960, too. The picture was a box-office hit, and earned Wilder three Oscars—as producer (Best Picture), director, and screenwriter (shared with I.A.L. Diamond).

Jack Lemmon gave the best of his many great performances here as a very small cog in the machinery of a giant, New York-based insurance company. His small desk sits in a sea of other small desks that seems to disappear off the horizon. His strategy for getting ahead: He loans his apartment out to company executives—all married men, of course–who use it for private time with their mistresses. The story is set in winter, and Baxter spends his evenings and much of his nights standing on an icy sidewalk or sitting in a drizzly Central Park while his superiors make whoopee in his bed.

Wilder and Diamond expertly balance comedy and drama. At one moment, The

Apartment can have you laughing at two drunks about to commit adultery. At the next, you’re horrified over a possible suicide. Scant minutes later, you’re laughing again, but with something horrible caught in your throat.

This precarious balancing act allows The Apartment to explore the cruelty, narcissism, and ambition found in the corporate world. The executives exist only for their own satisfaction. They lie to and use their mistresses. They manipulate Lemmon’s character with a combination of fake friendship and thinly-veiled threats. And, of course, they’re cheating on their unseen wives.

This was shocking material for 1960. Married couples were still sleeping in separate beds in movies and on television, and along comes this film where married men are clearly having adulterous affairs.

To make matters worse for the guardians of Hollywood morality, one of those executives—the most powerful one—is played by Fred MacMurray. At the time, MacMurray was known primarily for Disney movies; playing a controlling and womanizing executive was a serious career risk for him. (Wilder seems to have been the only director to see MacMurray’s dark side. He used him twice; here and in Double Indemnity).

Shirley MacLane rounds out the love triangle as a spirited elevator operator whom Lemmon’s character loves and MacMurray’s character uses. She’s caught in the middle, hopelessly in love with a man who is merely using her, and unsure about her feelings towards the weak-willed sucker who adores her. Unlike Lemmon’s, MacLane’s character doesn’t come off as a human doormat; she’s upbeat, witty, and willing to threaten a powerful executive who touches her inappropriately. But that makes the cruel treatment she endures all the more crushing.

This is a very special motion picture.

Cinematographer Joseph LaShelle (a film noir specialist) shot The Apartment in Panavision (anamorphic ‘scope with Panavision lenses) and black and white. Scenes set in the insurance office are bright, clear, and antiseptic. Scenes shot in the apartment itself are often dark and noirish.

This 1080p transfer does full justice to LaShelle’s photography. It delivers all the fine detail, bright lights, and deep shadows that were intended.

I’m not sure what kind of soundtrack The Apartment had when it first opened. It’s possible that United Artists released a few prints with four-track magnetic stereo sound. But probably not. I suspect that the original release was pure mono.

Yet MGM and 20th Century-Fox have released the Blu-ray with only a new 5.1 mix. While I would have preferred the original mono, the rechanneling doesn’t do much harm. In fact, I only noticed directional sounds one or two  times in the movie.

The soundtrack is in lossless DTS-HD Master Audio. The fidelity is excellent. 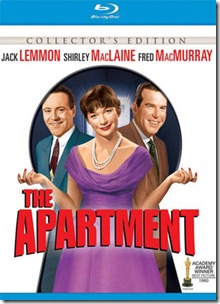 This Blu-ray comes with a superb commentary track by film producer and historian Bruce Block. He discusses a wide range of topics, including character development, the film’s themes, staging and photography, problems filming on location, and how the giant office set was shot. When he has nothing to say about the current , he discusses how Billy Wilder became a major filmmaker.

The only other extras are a couple of brief and moderately interesting making of featurettes: “Inside the Apartment” and “Magic Time: The Art of Jack Lemmon.”

Overall, this is a great disc of a great movie. And since you can buy it for less than $20, it’s a bargain, as well.