The film festival season seems to be slowing down. We only have two this week, and neither survives through Monday.

But we still have movies.

A- Hannah and Her Sisters, Castro, Wednesday

Various members and ex-members of an extended family suffer through their lusts, stupidities, and suicidal urges in Woody Allen’s relationship comedy/drama. Allen juggles an all-star cast (Mia Farrow, Michael Caine, Barbara Hershey, Max von Sydow and himself) and produces a story that’s cynical, funny, and surprisingly sweet. On a double bill with Broadway Danny Rose, which I haven’t seen in a very long time but liked when I saw it.

The B+ goes to The Iron Horse, John Ford’s first big-budget western. The characters are simplistic pawns and stereotypes, and the patriotism is overblown, with an almost God-like view of Abraham Lincoln. But the spectacular visuals and exciting action sequences, especially the final Indian attack (yes, the film is also racist), have an impact beyond the story and characters. Upstream, an amusing and entertaining trifle about the residents of a theatrical boarding house, gets a B- on its own. It in no way feels like a John Ford film, but it’s fun and it shows that he was considerably more versatile than his legend suggests. Dennis James accompanies both films on the Stanford’s Wurlitzer pipe organ.

Henry Hill (Ray Liotta) was just another crook working for the mafia. Martin Scorsese’s brilliant retelling of Hill’s life follows him from his enthusiastic, adolescent leap into crime until–25 years later–he rats on long-time friends to save his own neck. (Was that a spoiler? Not really.) Liotta narrates most of the film as Hill, who clearly loved his life as a “wise guy.” But while the narration romanticizes the life of crime, Scorsese’s camera shows us the ugly reality. Goodfellas is dazzling filmmaking and incredible story-telling. And the story it tells shows a seductive but inevitably horrible way to live. Read my A+ essay. On a double bill with Carlito’s Way.

A Touch of Evil, Rafael, Sunday

Orson Welles’ film noir classic, and his last Hollywood studio feature. He lacked the freedom he found in Europe, but the bigger budget–and perhaps even the studio oversight–resulted in one of his best works. As a corrupt border-town sheriff, Welles makes a bloated, scary, yet strangely sympathetic villain. Janet Leigh is a lovely and effective damsel in distress. As the hero, a brilliant Mexican detective, Charlton Heston is…well, he’s miscast, but not as badly as some people say. The final screening in the series Welles 100: the Maverick.

B- The Toll of the Sea, Niles Essanay Silent Film Museum, Saturday, 7:30

Anna May Wong received one of her few starring roles in this blatant rip-off of Madame Butterfly (set in China rather than the original’s Japan). But the real star is the very early two-color Technicolor process. A pretty good weepie lifted into special interest by Ms. Wong’s beauty and talent, and its historical value as one of the first films shot in Technicolor. As far as I know, the last reel is still missing, but the story gets filled in through new footage and title cards. Preceded with the short subject Fashion News, also in Technicolor. Piano accompaniment by Judy Rosenberg. A celebration of Technicolor’s 100th anniversary.

This is one exceptional comedy–a Raymond Chandler story where Philip Marlowe has been replaced with a happily unemployed, perpetually stoned, thoroughly inept slacker who calls himself “the Dude” (Jeff Bridges). Behind the laughs, you can find a thin, barely grasped sense of Zen–as if you could throw yourself to the universe and everything will come out okay…unless it doesn’t. The wonderful supporting cast includes Sam Elliott, John Turturro, Julianne Moore. Philip Seymour Hoffman, and John Goodman as the funniest Vietnam vet ever to suffer from PTSD. (Actually, his friends do most of the suffering.) Read my full report.

B+ Wings of Desire, Castro, Monday

Wenders’ fantasy about angels in Berlin offers a view of the city as a land of interior monologues. Two angels: Bruno Ganz, and Otto Sander) watch over the people, listen to their thoughts, and comfort them in their pain. Then one of them (Ganz) falls in love with a trapeze artist, and finds himself longing for mortality. Wenders couldn’t have known it when he made the film in 1988, but he was capturing the last months of a divided city; the wall seen in the film would soon come down. With Peter Falk as a strange version of himself. On a Wim Wenders double bill with Faraway, So Close!

One of Hitchcock’s best. In order to prove her patriotism, scandal-ridden Ingrid Bergman seduces, beds, and marries Claude Rains’ Nazi industrialist, while true love Cary Grant grimly watches. Grant sent her on this deadly and humiliating mission, and she literally sleeps with the enemy on his orders. He reacts with blind jealousy. The Nazi, on the other hand, appears to truly love her. Sexy, romantic, thought-provoking, and scary enough to shorten your fingernails. I discuss the film more deeply in my Blu-ray Review.

B+ Oklahoma, various CineMark Theaters, Sunday (matinee only) and Wednesday

Yes, the plot is silly and some of the cowboy accents are terrible, but when you see Oklahoma! on the big screen, with an audience, you discover what a remarkable piece of entertainment it is. The songs are catchy, the jokes are funny, and Agnes DeMille’s choreography is amongst the best ever filmed. Historically, the movie racked up a lot of firsts. It was the first Rodgers and Hammerstein picture (based on their first play together), the first film shot in Todd-AO, the first presented in 70mm with six-track sound, and the beginning of the roadshow musicals that dominated Hollywood for the next 15 years. The new digital restoration brings back all that Todd-AO magic.

This romantic comedy rarely succeeds in being funny. And when it’s not trying to be funny, it succeeds only in heavy-handedly preaching about the need to accept yourself for what you are–overweight, insecure, and socially awkward. It starts well, as Bobby (Jonathan Lisecki) considers buying a house, only to be snubbed by the neighbors not for being gay but for being single (the neighbors who snub him are gay fathers). But Lisecki way overplays the loser character to the point where he becomes annoying to everyone on screen and off. When smart, sensitive, gorgeous Andy (Nicholas Brendon) falls in love with him, he can’t believe it…and neither could I. Part of the International Southeast Asian Film Festival. 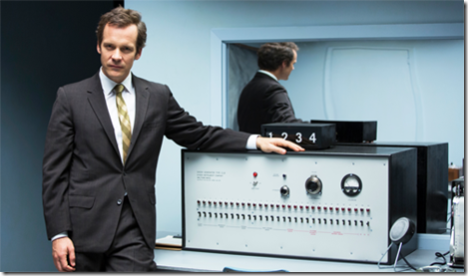 In the early ’60s, Stanley Milgram (Peter Sarsgaard) ran tests that tricked subjects into thinking they were torturing another person. He wanted to see how many would stop when ordered to keep going. His methods were extremely controversial. Writer/director Michael Almereyda, who clearly sides with Milgram in the controversy, finds unique and entertaining ways to tell the story; Sarsgaard frequently talks directly to the camera, and occasional scenes use intentionally fake backgrounds. The acting is mostly excellent, and the subject matter is just plain fascinating. Winona Ryder plays Milgram’s wife. Read my full review.

Jay Roach turns the story of blacklisted screenwriter Dalton Trumbo into a lively, entertaining, and important drama. Bryan Cranston of Breaking Bad makes a lively, funny, and complex Trumbo, and the rest of the cast—almost all of them playing real people—all do a fine job, with Helen Mirren’s Hedda Hopper standing out. As with all biopics, there’s a lot of fiction here, but it gets to the heart of the true story about a dark but important era in the history of Hollywood and America.

B+ What Our Fathers Did: A Nazi Legacy, Lark, opens Friday

How do you go through life with the knowledge that your father was a mass murderer? This unsettling documentary offers two reactions: Niklas Frank grew to hate his high-ranking Nazi father. Horst von Wächter insists his father was innocent despite massive evidence otherwise. These days, it’s hard to find a fresh documentary approach to the Holocaust. But in the stories of Niklas Frank and Horst von Wächter, filmmakers Philippe Sands and David Evans found a strong one. Read my full review.