A Apu Trilogy, Lark, various dates throughout the week (details below) 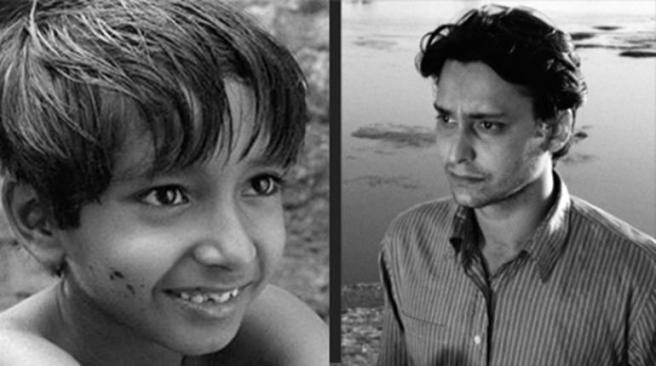 Epic in scope, Satyajit Ray’s three-film masterwork follows the life of poverty-born Apu from birth through young adulthood. None of the films has a plot in the conventional sense, but they all brim with drama, laughter, joy, suspense, and heart-breaking tragedy. In other words, they’re about life–specifically life in early 20th-century India, and that means life in a society where dying of old age is rare. Subrata Mitra’s atmospheric photography, Ravi Shankar’s wonderful score, and a terrific cast (four actors of different ages play the title character) make this an exceptional cinematic experience. Read my longer article.

In Rashomon, Akira Kurosawa reminds us that we can never really know anything. Visually beautiful and deeply atmospheric, this eight-character chamber piece recounts the same crime four times by different eyewitnesses, and none of their stories match. An easy A+. See my Kurosawa Diary entry and my Blu-ray review. In Throne of Blood, Kurosawa creates a haunting, noh- and kabuki-inspired loose adaptation of Macbeth. Toshiro Mifune gives an over-the-top but still effective performance as the military officer tempted by his wife (Isuzu Yamada) into murdering his lord. I give it an A-. I have a Kurosawa Diary entry and a Blu-ray review of this one as well.

What’s more fun than state-of-the-art special effects? State-of-the-art special effects circa 1924. Douglas Fairbanks’ spectacular Arabian Nights fantasy never actually fools you into thinking a horse can fly, but the clever effects and imaginative set design inspire awe and delight all the same. As does Fairbanks’ completely unrealistic performance as the energetic and happily ambitious thief. Don’t expect actual Arabian flavor here; this is pure early Hollywood fancy. And don’t expect 21st century racial attitudes in Fairbanks’ treatment of the Chinese. A lot of fun, but not up to the 1940 Technicolor remake. With two shorts. Accompanied by Jon Mirsalis on the Kurtzweil.

A The Hidden Fortress, Stanford, Wednesday through next Friday

Akira Kurosawa showed astonishing range within the samurai genre (as well as outside the genre). Seven
Samurai is an epic drama with fully-developed characters and realistically unpredictable violence; Yojimbo is a black comedy; Throne of Blood is stylized Shakespeare. But The Hidden Fortress is just plain fun–a rousing, suspenseful, and entertaining romp. It was also his first widescreen film, and contains two comic peasants (Minoru Chiaki and Kamatari Fujiwara) who were the inspiration for R2D2 and C3PO. See my Kurosawa Diary entry and my Blu-ray review.

James Dean received top billing is this melodramatic message picture about what’s wrong with kids these days. And what’s wrong? Parents don’t spend time with their kids and boys need fathers who are man enough to put the womenfolk in their place. And yet, thanks largely to Dean’s electrifying, frightening, and sympathetic performance, it’s a far better movie than it has any right to be. As a middle-class juvenile delinquent adjusting to a new school, Dean defined the word teenager when it was still a new concept. Of course, he got a lot of help from director Nicholas Ray, and by supporting players Natalie Wood and Sal Mineo as his only friends. In very wide early Cinemascope.

B+ The 7th Voyage of Sinbad, Balboa, Saturday, 10am

The first and best of Ray Harryhausen’s three Sinbad movies. In fact, of all his movies, only Jason and the Argonauts is better. The stop-motion animation is splendid, and the story, while trivial, is fun. Not a must-see like Jason, but still an entertaining escape into a fantasy past. 7thVoyage is an important movie in Harryhausen’s career; his first in color, his first period piece, and his first out-and-out fantasy after a series of sci-fi pictures involving aliens or monsters wreaking havoc on major metropolitan areas. I discuss the movie in more detail in Earthquakes and Monsters.

New 4K restoration. Classic film noir with an international flavor. An American pulp novelist (Joseph Cotten) arrives in impoverished, divided, post-war Vienna to meet up with an old friend who has promised him a much-needed job. But he soon discovers that the friend is both newly dead and a wanted criminal. Writer Graham Greene and director Carol Reed place an intriguing mystery inside a world so dark and disillusioned that American noir seems bright by comparison. Then, when the movie is two thirds over, Orson Welles comes onscreen to steal everything but the sprocket holes. See my A+ article.

Sometimes a new movie blows apart every concept you had about what a motion picture can be. Sean Baker’s tale of a transgender prostitute out for justice creates just that sort of magic. Fast, frenetic, funny, and sad, Tangerine looks like no other movie I’ve ever seen, probably because it was shot entirely on iPhones. And yes, that works, allowing the filmmakers to capture the tarnished glamour of today’s Hollywood. The most exciting and original new film I’ve seen this year. Did I tell you it’s a Christmas movie? Read my full review.

A The End of the Tour, California (Berkeley), Piedmont, opens Friday

Based on a true story about the meeting of two brilliant minds, this film provides something rare in movies–intellectual discussion. In 1996, journalist and budding novelist David Lipsky (Jesse Eisenberg) spent several days interviewing suddenly respected novelist David Foster Wallace (Jason Segel). They bond, sort of, but Lipsky wants access to Wallace’s private thoughts, and Wallace is reluctant to open up. Segel turns Wallace into a fascinating character–deeply troubled and, despite his fame, deeply insecure. Excellent film. 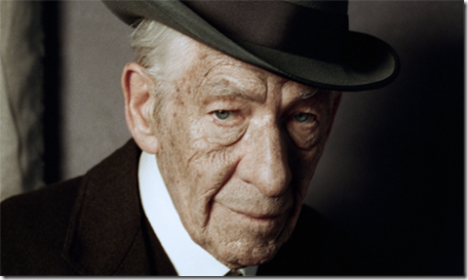 Ian McKellen plays Sherlock Holmes as an old man and as a very old man—mostly the later—in this entertaining but not too deep drama. Retired from solving crimes, Holmes is now a 90ish beekeeper (the film is set in 1947–about 20 years after Doyle wrote his last Holmes story), living with a widowed housekeeper and her young son. Holmes is in a race against time, trying to write down the true story of his last case—to correct Watson’s exaggerations—before senility sinks too deep. For Holmes fans, and I’m one of them, this is a wonderful gift. For everyone else, it’s still an enjoyable day at the movies. Read my full review.

B+ Sing-Along Wizard of Oz, Castro, Friday through Sunday 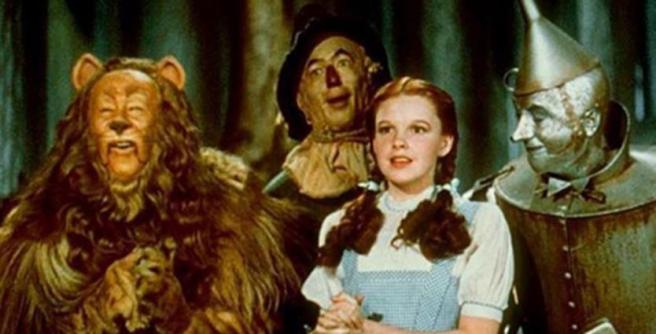 I don’t really have to tell you about this one, do I? Well, perhaps I have to explain why I’m only giving it a B+. Despite its clever songs, lush Technicolor photography, and one great performance (Bert Lahr’s Cowardly Lion), The Wizard of Oz never struck me as the masterpiece that everyone else sees. It’s a good, fun movie, but not quite fun enough to earn an A. I have not experienced the sing-along version.

Few people know Kurosawa’s dark, contemporary, and suspenseful tale of corruption and revenge—and that’s a shame. It concerns a large, successful, and thoroughly corrupt corporation, and a young man (Toshiro Mifune) out to destroy it from the inside. First he marries the president’s crippled daughter—an act that everyone reads as blind ambition. But the real motive is revenge. Kurosawa reveals the reasons for and depth of that revenge slowly in a startling, suspenseful, and bleak story that provides neither catharsis nor easy answers. See my Kurosawa Diaries entry.

Regular readers know that I’m a fan of the classic bad-movie-with-commentary TV show, Mystery Science Theater 3000. I have never seen an episode on the big screen with a full audience, but I suspect I’d enjoy it–especially if it’s a really good episode. I hope this will be a good episode; no one is telling us which one will be screened.

I know. For many cinephiles, this isn’t just Alfred Hitchcock’s masterpiece, but one of the greatest films ever made. But I just don’t get it. Neither the story nor most of the characters make any sense, and I don’t believe anyone’s motivations. The film contains one wonderful, believable, and likeable character, Barbara Bel Geddes’ Midge, but we don’t see enough of her to offset everything else. Yes, the film is very atmospheric, but that’s just not enough. I don’t need to stare at a screen to experience San Francisco’s fog.