The Imitation Game takes considerable liberties in dramatizing the life of Alan Turing. But the result is an effective, entertaining, and sympathetic tragedy about a man who played important roles in both winning World War II and in laying the groundwork for computer technology, and who was hounded to suicide by an intolerant society.

The basic story is reasonably accurate. A brilliant mathematician, Turing played an important role–possibly the most important role–in cracking the Nazi’s enigma code, allowing the British military to read secret messages. He was one of the first people to conceive of the idea of a digital machine that could do whatever job it was given instructions to do–what we now call a computer. He hypothesized the concept of artificial intelligence, and developed the Turing Test as a way to find out if a computer could think. He was arrested and convicted for homosexual acts, and forced to take hormone injections to control his libido. He killed himself.

Screenwriter Graham Moore and director Morten Tyldum rightfully concentrate on his war experience. It allows us to follow him as part of a team–almost always more interesting than one person–and it gives us higher stakes. Civilization is in the balance. Besides, It’s fun to watch intelligent people break a code while they slowly turn into a team. 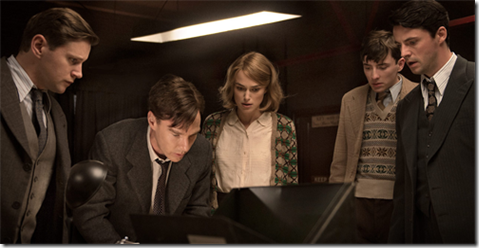 Turing leads this top-secret team of code breakers–despite his utter lack of leadership ability. As played by Benedict Cumberbatch, he seems far along on the Asperger scale–the film’s most serious departure from truth. He throws himself relentlessly into his work, barely socializes with his compatriots, and misses almost every social cue. His pathetic attempt to tell a joke is funnier than the joke itself. The real Turing, while not a social butterfly, could get along with people without problems.

Every so often, the story flashes forward to Turing’s persecution in the early 1950s. At first, I was put off by these scenes–I wanted to stay with the main story. But as the film progressed, this story became urgent in its own right. Rory Kinnear’s performance as a dogged but ultimately sympathetic Scotland Yard detective helped.

The film occasionally flashes back to Turing’s childhood, when he makes one good friend at school. Fortunately, these scenes are brief, although by the end this story to became part of the emotional arc.

Like so many English period pieces, The Imitation Game acts primarily as a showcase for actors. Cumberbatch does a variation on his Sherlock Holmes, but he digs deeper here. His emotional struggles are more real. Keira Knightley plays the only woman on the team. She falls in love with Turing, of course. Fortunately, the film doesn’t make a big deal about that.

There’s another problem, and it’s one I’ve seen in a number of recent British period pieces: CGI spectacle. The Imitation Game has shots of bombers, burned out cities, and other high-scale images of war, all clearly created on computers. They look distractingly like beautiful paintings. To be fair, the glass shots, rear projection, and matte paintings of past eras look pretty fake, too, but that doesn’t really help. The film also uses actual war footage, which only serves to make the CGI look all the more fake.

I left the theater wanting to learn more about Turing. I give this film a B+.

Note: I have altered this article, and lowered the film’s grade, after learning more about Turing and reflecting on the film.

2 thoughts on “My Thoughts on The Imitation Game”