It might be possible to watch Harold Lloyd’s 1925 masterpiece, The Freshman, without laughing, or without hoping that the protagonist will win the popularity he so deeply wants. But it wouldn’t be easy. Every shot in this film is brilliantly designed to make you either laugh or care–or both.

Lloyd’s "glasses" character truly came into his own in The Freshman. He’s more than just the brash, clever, ambitious, and opportunistic young American of Safety Last. Here "Harold Lamb" is a naïve college freshman, caught in the tide of peer pressure, desperately wanting to be liked and admired by his fellow students. In his determination to become popular, he unknowingly becomes the class clown. Everyone pretends to like him, but they’re all laughing behind his back.

How can you watch a story like that and not be moved? This kid has spunk to spare. Even when his ineptitude makes a mess of things, his spirit and fortitude seem admirable.

What’s more, the movie is peppered with brilliant, extended comic sequences–although none top the climax of Lloyd’s Safety Last. Silent comedy, which don’t have to pause for the laughter to die down so that the audience hear the next line, could build one gag on top of another, producing an unstoppable locomotive of laughter. Lloyd was one of the masters of this technique.

Consider the Fall Frolic sequence. Harold is hosting the big party. It’s clearly hurting him financially, but he springs for a tailor-made tuxedo. Unfortunately, the tailor is subject to fainting spells, and has only managed to baste the tux –it’s not properly sewn together. So we have Harold trying to be the life of the party while his guests are secretly laughing at him, his suit is coming apart, and an elderly tailor is sneaking around, trying to fix the disintegrating tux without being seen–and without fainting.

And all the while, the local working girl who loves him looks on, far more aware than Harold of his real status. And his real worth.

I’m not sure if Jobyna Ralston was the best of Lloyd’s leading ladies, or simply the one who was there when Lloyd reached his artistic maturity. She’s not as funny as Mildred Davis, who after Safety Last gave up a career as his on-screen ingénue to become his real-life wife. But Ralston’s on-screen persona seemed both pure and worldly, sexy and motherly. She could deliver a "believe in yourself" pep talk that would save the day–even in a silent movie.

I suppose I should explain why I called this film "Harold Lloyd’s The Freshman," even though the directing credit goes to Fred Newmeyer and Sam Taylor. Lloyd produced the film, and had complete control. Historians pretty much agree that Lloyd, who never took a directing credit, was the leader of the collaborative team that made his films.

The auteur is not always the director. 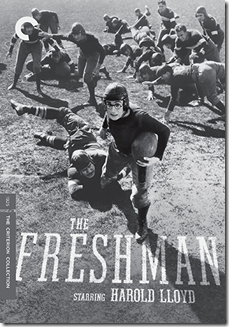 This unusually thick three-disc set comes in a cardboard slipcover. The fold-out container inside has a cover designed as the Tate College 1925 yearbook.

Inside, on the left, are two DVDs stacked together. You have to remove disc 1 to access disc 2. On the right, a single Blu-ray disc contains the same content as the DVDs–looking and sounding better, of course.

Also in the box is a thin booklet dominated by an article by Stephen Winer, "Speedy Saves the Day! A Harold Lamb Adventure!" Mostly, this article puts the movie in its’ 1925 context. The booklet also has an "About the Transfer" page and disc credits.

This is one of the best transfers of a silent film I’ve yet seen–for the most part clear and sharp as a tack. Whether the image is pure black-and-white or tinted (the tints are based on instructions that came with the negative), it’s a beauty to behold.

I thought I saw, very briefly, some nitrate deterioration. It went by so fast I’m not entirely sure. (And no, I didn’t go back and look for it. I was enjoying the film too much.) 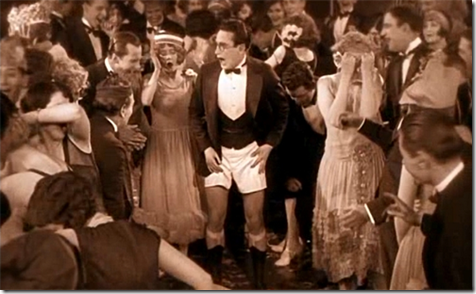 This version comes with a new chamber orchestra score composed and conducted by my favorite silent film accompanist, Carl Davis. Like his Safely Last score, this one is heavily flavored with jazz–appropriate for Lloyd, whose work is so much of the jazz age.

I love Davis’ work, but he made a serious mistake here. The music in the climactic football game was too subdued. It’s an exciting scene that deserves exciting music.

The score is presented in two-track stereo, uncompressed PCM. It sounds great.

Much as I love this score, I wish they had also included Robert Israel’s score from the previous Warner Brother’s release (part of The Harold Lloyd Comedy Collection, Volume 2). That one, too, is excellent. With silent films, the more scores, the merrier.

No wonder the DVD version comes on two discs. There’s a lot of stuff here.

Criterion’s release of The Freshman, containing both DVDs and Blu-ray, go on sale today.