Sorry, folks. No festivals this week. I think that has to do with some holiday that Fox News wants to go to war for.

B Go for Sisters, Opera Plaza, opens Friday. John Sayles at his most conventional; in all but the details, you’ve seen this film before. A pair of mismatched protagonists

join forces to find a missing person, with the help of a colorful retired cop. Along the way, they’ll face evil criminals, use a gun, and bond.  On the other hand, this is also the rare American movie almost completely devoid of white people, starring two African-American women and a Hispanic man. Entertaining but largely unexceptional. Read my full review.

A Fargo, New Parkway, Sunday, 9:30. The ultimate crime-gone-wrong thriller and the

Coen Brothers’ masterpiece, Fargo treads that thin line between the horrific and the hilarious while never forgetting the humane. With star-making performances by William H. Macy, as a man in way over his head, and Frances McDormand, as a very pregnant cop with a lot of empathy and common sense u. Also starring the the bleakest snowscapes in American cinema. Read My Thoughts on Fargo.  A Party at the Parkway.

B+ Bullitt, Castro, Saturday. Age hasn’t been altogether kind to this once cutting-edge police thriller. It seems more pedestrian than it once did. But it has

its pleasures, especially Steve McQueen’s exceptionally cool charisma and the best car chase ever shot on the streets of San Francisco. Another marker: To my knowledge, McQueen’s single use of the word “bullshit“  marks the first time anyone said such a word in a Hollywood movie; Bullitt was released precisely two weeks before the rating system replaced the old production code, but the new freedom was already bubbling up. On a double bill with the original Thomas Crown Affair, which made almost no impression on me.

A Die Hard, Clay, Friday and Saturday, midnight. The 1980s was a great decade for big, loud action movies. In this, one of the best, Bruce Willis plays a New York cop in LA for Christmas, hoping to win back his estranged w 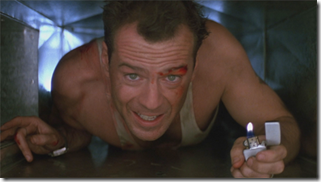 ife and their kids. But then a group of Very Bad People take over the office building where his wife works (and where he’s visiting) and holds everyone hostage. Willis spends most of the movie playing cat-and-mouse with the bad guys, bonding with an LA cop over a walkie-talkie, and mumbling about his rotten luck. The result is top-notch entertainment–even if its politics lean a bit to the right. Die Hard spawned three sequels and innumerable rip-offs, and while many of them were good, none matched the original. 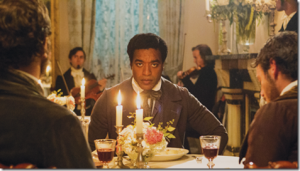 in upstate New York–and sold him into slavery down south. This film, based on Northup’s memoirs, shows us the horrors of slavery through the eyes of an educated man turned into a beast of burden. Chiwetel Ejiofor gives an Oscar-worthy performance as Northup, horrified, trapped, and mostly helpless. Beautiful yet daring photography, combined with minimalist editing, intensify the horrors. Easily the best new film I’ve seen this year. Read my full review.

writer/director Preston Sturges could find a way to satirize patriotic hoopla at the height of World War II. A draft-board reject (Eddie Bracken) feels too disgraced to return to his small town. So four marines help him out by loaning him a uniform and taking him home, praising his heroism all the way. Of course there are complications. But I’d only give a B- to A Day at the Races. By their sixth film, the Marx Brothers had become tame. The movie has some funny scenes, but Groucho, Harpo and Zeppo have lost a lot of their edge here.

B+ The Wizard of Oz, New Parkway, opens Saturday; Castro, Thursday. Yes, I know the Castro screened this only last month. But this time it’s special! It’s in 2D! (I’m tempted to say "In 2D, as it was 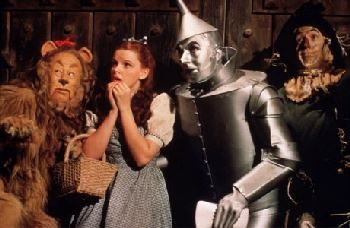 intended to be shown," but someone would object because of the digital projection.) I like the movie well enough, but it never struck me as the masterpiece that everyone else sees. It’s a good, fun movie, but not quite fun enough to earn an A. On the plus side, it sports clever songs, lush Technicolor photography, and one great performance (Bert Lahr’s Cowardly Lion).

The Ten Commandments (1922 version), Niles Essanay Silent Film Museum, Saturday, 7:30. I saw Cecil B. DeMille’s first take on the Book of Exodus once, about

20 years ago, on VHS, and I’m not going to give it a grade now. But I can tell you that unlike the 1956 remake, the silent version is primarily a modern morality tale. The whole Moses/Pharaoh story is confined to a brief prologue. As I recall, that prologue is at least visually spectacular. I didn’t care much for the rest of the movie. With Jon Mirsalis providing music on the Kurzweil.

Santa Claus Conquers the Martians, New Parkway, Sunday, 6:00. I’ve only seen this holiday monstrosity with commentary by either Mystery Science Theater 3000 or

MST3K spinoff RiffTrax. Therefore, I can’t formally judge this cinematic work on its own merits. Nevertheless, I feel confident in saying that this is a very silly, poorly-made movie, but a fun one. While, to my knowledge, there will be no commentary Sunday evening, the New Parkway will be screening this science fiction holiday epic as a Thrillville Theater presentation hosted by Lord Blood-Rah. I don’t think they would do that with Goddard.

B Gravity, Lark, Friday through Tuesday. In 1968, 2001: A Space Odyssey made me want to be an astronaut. In 2013, Gravitycleared any such desire that still lingered. Easily the most

technically realistic view of space travel ever created on Earth, Gravity not only makes you feel like you’re there; it makes you want to return home. An environment with no air, no up or down, and nothing to stop you from drifting is not a nice place to raise your kids. Yes, the story is simplistic and not always realistic (just how close are all those space stations?), but it’s suspenseful, and far more believable than any other recent special effects blockbuster. Note: I’m knocking the grade down from an A- because the Lark is screening Gravity in 2D, and this movie really demands 3D.

A+ It’s A Wonderful Life, Balboa, Saturday, 10:00am; Castro, Sunday; various CineMark theaters, Tuesday; Stanford, Tuesday, sold out. I told you this one would turn up again. There’s a rarely-acknowledged dark

side to Frank Capra’s feel-good fable. George Bailey (James Stewart) saves his town and earns the love of his neighbors, but only at the expense of his own dreams and desires. Trapped, frustrated, and deeply disappointed, George needs only one new disaster to turn his thoughts to suicide. The extremely happy (some would say excessively sappy) ending works because George, whose main problems remain unsolved, has suffered so much to earn it.

absurdity of casting singer Rudy Vallee as the millionaire rival ready to win Claudette Colbert from husband Joel McCrea, it’s also the Weenie King, the Ale and Quail Club, Toto, and the most ridiculous happy ending ever filmed. The Marx Brothers’ first MGM movie, Night at the Opera, is a more spectacular, and more commercial, movie than their previous Paramount efforts. It contains some of their best routines (“The party of the first part,” the overcrowded stateroom), but you have to sit through a dumb romantic plot, very unmarxist sentimentality, and insipid love songs. On its own, it would only earn a B.