Now, on with our review.

Before Christopher Lee, Gary Oldman, or even Bela Lugosi, Max Schreck created the first screen Dracula. He was not the elegant, sexy aristocrat of the night that he became later, but something out of a nightmare. Impossibly thin, with pointed ears and  fingernails that seemed to go on forever, he clearly wasn’t human. His fangs, in the center of his mouth like a beaver’s, completed the disquieting effect. Was this a man, a giant, bipedal rat, or the devil?

F.W. Murnau’s 1922 masterpiece, Nosferatu: A Symphony of Terror, was the first great feature-length adaptation of Dracula. And although it takes a very different path than later adaptations, It’s still one of the best vampire movies ever made, and the best to follow the broad outline of Bram Stoker’s novel.

Murnau’s producers failed to buy the novel’s movie rights. So they altered the characters’ names and some of the places where the story is set. Dracula becomes Count Orlock. Jonathan Harker is now Hutter (no first name given). And instead of moving to London, the vampire takes his death ship to Wisborg. Stoker’s widow sued, won in court, and ordered all prints destroyed. Fortunately, some survived.

Nosferatu is not, by a long shot, the scariest horror film ever made. But it is almost certainly the creepiest. This movie makes your skin crawl. Schreck’s makeup and performance plays the major role in getting that result, but not all of it. The startling photography, the well-picked locations, and the slightly off-kilter sets help. So do the shots of nature’s predators and prey, and the often surprising appearances of rats.

Speaking of rats, this version of Dracula, set in the early 19th century, has several allusions to the black death. The word plague turns up several times in the intertitles, and a book on vampires refers to that tragic time.

Nosferatu was part of the post-war German Expressionism movement. The performances are large and exaggerated–considerably more so than those in American silent films. But these oversized performances don’t take you out of the story; they send you deeper into it.  (Well, most of them do; Gustav v. Wangenheim’s performance as Hutter makes me want to beat him with a stick.) 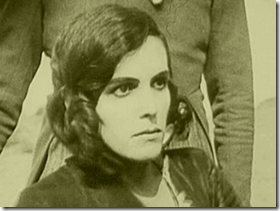 in Broker’s novel). With her dark hair and sad eyes, and her proclivity for sleepwalking, she carries tragedy with her even when she’s happy. And as the movie progresses, she has very little reason to be happy.

Nosferatu does something simple and yet utterly amazing. It took a relatively recent best-selling adventure novel, set in the present, and turned it into  an ancient myth about the unavoidable existence of evil. It’s utterly unlike any of the vampire movies that followed (except, perhaps, Werner Herzog’s remake), yet has more atmosphere and effect than any of them. 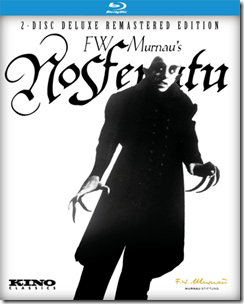 Nothing special here. Just a standard Blu-ray box in a slip cover, with two discs and nothing else inside.

I’m not sure why there have to be two discs. Blu-ray’s seamless branching technology should have allowed Kino to put both sets of intertitles on the same disc.

Both discs start up quickly and go directly to the main menu.

Restorations of silent films are rarely perfect. Inevitably, some bits and pieces will come from inferior sources. Such is the case here, although nothing is truly horrible. The worst scenes look acceptable, and the best ones look mouth-wateringly fantastic (or perhaps I should say "mouth-bloodingly creepy").

I saw more details here than I’ve ever seen before. Credit must go as much to the

restoration (which I believe was done on film) as to Kino’s transfer. Most of the shots exhibit scratches, although they’re never to the point of ruining the viewing.

The restoration recreated Murnau’s original tints, which play an important part of creating the atmosphere. Indeed, without tints (which is the first way I saw Nosferatu), the vampire often appears to be walking around in broad daylight.

Nosferatu has always been a visual feast. This restoration and transfer makes it all the more impressive.

You hear this movie before you see it. After a couple of cards discussing the sources for the restoration, this release of Nosferatu starts with an overture.

This silent film disc comes with a new recording of Hans Erdmann’s original 1922 score. In other words, it’s the official score, the definitive one, and in the minds of certain purists, the only one that should ever be played.

Unfortunately, it’s not the best Nosferatu score. It’s very good, sometimes excellent, but I’ve heard better scores live and on DVD. Erdmann made some very strange decisions. For instance, while Hutter happily travels through Transylvania towards Count Orlock’s castle, the score plays a pleasant pastoral. This may fit Hutter’s mood, but it didn’t help the sense of dread that the scene needs.

It’s a pity that Kino did not include alternative scores, as the company does in many of its Buster Keaton discs. But they do give us the choice of listening to this score in either a 5.1 mix (lossless DTS-HD Master Audio) or a 2.0 one (uncompressed LPCM).

Nosferatu comes with only a handful of extras.