No festivals this week. And no big, French silent films accompanied by full orchestras, either.

B Comic-Con IV: A Fan’s Hope, Vogue, opens Friday. Morgan Spurlock’s latest documentary will disappoint his fans, which is odd 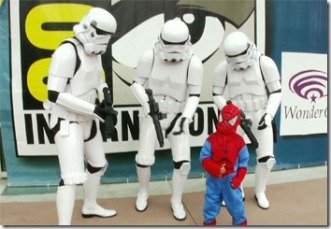 because it’s all about fandom–specifically fans of comic books,  video games, and sci-fi/fantasy movies with reoccurring characters. This documentary follows professionals and fans as they prepare for and attend Comic-Con, a large convention for self-described geeks. If you’re curious about this subculture or subcultures in general, it’s worth catching. But if you go because you’re a Morgan Spurlock fan, you’re going to be disappointed. Morgan Spurlock will be on-hand for Q&A at both Sunday screenings. Read my full review.

B- Free Men, Lumiere, Shattuck, opens Friday. Ismaël Ferroukhi’s Holocaust thriller reminds us about something too easily forgotten: Muslims were amongst the all-too-few heroes who risked their lives to protect Jews from the Nazis. Under the courageous 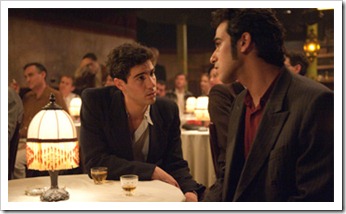 leadership of Si Kaddour Ben Ghabrit (Michael Lonsdale), the Grand Mosque of Paris became a haven for refugees. Free Men concentrates, not on Ghabrit, but on a fictitious black marketer (Tahar Rahim) who starts out as a police informer but finds his conscience. Unfortunately, the filmmakers fail to make Younes an interesting character until quite late in the film, and the plot is occasionally arbitrary and convenient. Free Men shows us how an ordinary person can become extraordinary when faced with evil, counters western society’s anti-Islam prejudicial views, and is a reasonably entertaining, suspenseful motion picture. But it could have been better. Read my full review.

A- Ben-Hur (1959 version), Alameda, Wednesday and Thursday. Novelist Lew Wallace ripped off the plot of The Count of Monte Cristo, set the story in Roman-occupied Judea, and had the title character cross paths with Jesus. Hollywood’s second film version of the best-selling book easily surpasses all of the other big, long religious epics that Hollywood churned out when the wide screen was a selling point.. It even surpasses the 1925, silent original. Ben-Hur makes a rousing tale, a good story, is visually breath-taking, and say, what you will, has the perfect leading man in Charlton Heston. The chariot scene still beats almost every other action scene shot. Only in the final hour, when Christianity gets ladled on thick, does it drag a bit. Ideally, this should be shown in 70mm or 4K DCP; I’ve never seen it that way myself, but I hope to one day. I have no idea how the Alameda will screen it.

A Playtime, Pacific Film Archive, Wednesday, 3:10. An American tourist, Monsieur Hulot, and assorted other specimens of humanity adrift and befuddled in a very modern 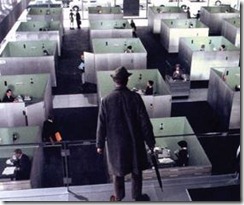 Paris. That’s all there is of plot in Jacques Tati’s large-scale comedy, and that’s all that’s needed. On one level, Tati is commenting on modern architecture. On another, he’s just making us laugh in his odd, almost meditative way. And even when you’re not laughing, you’re fascinated by the little details of Tati’s city-sized universe. The writer/director/producer/star spent (and lost) a fortune on Playtime, building a giant set and shooting the movie in 65mm for 70mm release, and the result is ours to enjoy…immensely. Part of the series and class Film 50: History of Cinema, Film and the Other Arts.

B+ American Graffiti, Pacific Film Archive, Friday, 7:00. A long time ago, in a Bay Area that feels very far away, George Lucas made an entertaining (and extremely profitable) movie without action, a big budget, or special effects. Talk about nostalgia. You can also talk about old-time rock ‘n’ roll–American Graffiti makes great use of the sounds of its time. Part of the series Costume Designer Deborah Nadoolman Landis, Behind the Scenes: The Art and Craft of Cinema.

The big, pleasant surprise of 2007, Juno offers an insightful, truthful, and very funny look at teen pregnancy. Writer Diablo Cody, director Jason Reitman, and star Ellen Page manage to be funny about a serious subject without ever moving into parody or farce, or straining for laughs. Read my full review. Cody and Reitman’s next collaboration, Young Adult, stars Charlize Theron as a selfish, self-deceiving, casually cruel, moderately successful, and possibly alcoholic writer. She returns to her home town in hopes of winning back her high school sweetheart on the eve of his wedding.  The filmmakers give us a character we can easily despise, then make us both laugh at and pity her.

B+ Grandma’s Boy, Niles Essanay Silent Film Museum, Saturday, 7:30. The best of Harold Lloyd’s early features, Grandma’s Boy hints at the brilliant comic story teller that Lloyd would soon become. Shy Harold lacks the courage needed to win the girl (or anything else), so his grandmother improvises a magic talisman and concocts a story to help him build up his nerve. Not Kid Brother or The Freshmen, but an important step in the direction of those masterpieces. Warning: The mothball scene may asphyxiate you with laughter. With the short "Her Torpedoed Love" and the fifth episode of "The Perils of Pauline." Greg Pane will tickle the ivories while Lloyd and company tickle your funny bone.

B- Gentlemen Prefer Blondes, Pacific Film Archive, Tuesday, 7:00. Howard Hawks’musical battle of the sexes contains a handful of wonderful dance numbers and some good comic moments, but there are too many weak scenes to wholeheartedly recommend it. The real surprise is in the leading ladies. Gentlemen helped turn Marilyn Monroe into a star, but co-star Jane Russell blows her out of the water. In this film, at least, Russell is funnier and sexier. Part of the series Howard Hawks: The Measure of Man.

B+ The Umbrellas of Cherbourg, Cerrito, Thursday, 7:00. When we think French New Wave, we imagine gritty, black-and-white stories filled with angst and alienation. Yet Jacques Demy, shooting a completely believable story in real locations, created a lush, colorful and sublimely romantic musical. A movie like few others, with an astonishingly young and beautiful Catherine Deneuve (as opposed to the astonishingly well-aged and beautiful Catherine Deneuve of today). A Cerrito Classic.

B The Fifth Element, Castro, Friday, 7:00. This big, fun, special effects-laden science  fantasy adventure refuses to take itself seriously. It never manages to be

particularly exciting, but it succeeds in being rousing and funny – intentionally funny – eye candy. It’s also one of the few futuristic movies that’s neither utopian nor dystopian, making it, for all the silliness of the plot, relatively realistic. On a double-bill with The City of Lost Children, which I have not seen in a very long time. Part of the series Jean Paul Gaultier: Maverick: Fashion Icon.

A+ The Adventures of Robin Hood, Stanford, Friday through Sunday. Not every masterpiece needs to provide a deep understanding of the human condition; some are just plain fun. And none more so than this 1938 Errol Flynn swashbuckler. For 102 minutes, you get to live in a world where virtue–graceful, witty, rebellious, good-looking, and wholeheartedly romantic virtue–triumphs completely over grim-faced tyranny. Flynn was no actor, but no one could match him for handling a sword, a beautiful woman, or a witty line, all while wearing tights. And who else could speak treason so fluently? The great supporting cast includes Olivia de Havilland, Basil Rathbone, and Technicolor–a name that really meant something special in 1938. On a double bill with the 1937 version of The Prisoner of Zenda.

A The Artist, Castro, Saturday through Tuesday. Michel Hazanavicius just made a silent movie about the death of silent movies. Even more amazing than that, he pulls it off, creating a warm, funny, heartfelt, and occasionally sad story of a Hollywood star’s fall 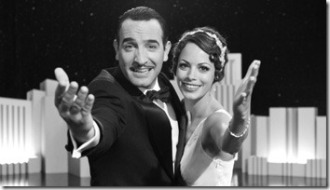 from grace as talkies ruin his career. Meanwhile, a struggling actress who loves him becomes a star in the new medium of talkies. Hazanavicius fills the picture with funny bits that illuminate the characters, the setting, and the medium. A black-and-white, narrow-screen, silent film is a hard sell in today’s market, and I’m pleasantly surprised to see that The Artist found an audience. Read my full review.