No film festivals running this week. In fact, none yet announced that I know of. Kurosawa films, at the PFA and the Viz, are at the end.

in the pantheon of noted filmmakers. This special effects “technician” neither wrote, produced, nor directed his films, yet he was their auteur, creating them from his own imagination. They were seldom masterpieces, but they were always entertaining fantasies made special by Harryhausen’s hand-made, character-oriented special effects. Jason is his best work (and the only one that earns that A), and 7th Voyage is also pretty good. But you can skip the late Golden Voyage and not miss anything important. This is the first of two triple bills celebrating Harryhausen’s 90th birthday.

B+ Invasion of the Body Snatchers (1956 version), Roxie, Friday. The best alien invasion movie of the 1950’s (and no, that’s not quite damning with faint praise), Invasion of the Body Snatchers is noir, sci-fi, and political allegory—although whether this tale of aliens taking over people’s identities is anti-Communist or anti-McCarthy depends more on your politics than on the filmmakers’. Either way, it’s an effective thriller that has been copied many times but not equaled—despite the cuts and annoying narration added by the studio. On a double bill with The Creeping Unknown, which I’ve never seen, this opens the Roxie’s Not Necessarily Noir series of movies that combine noir stylings with other genres. 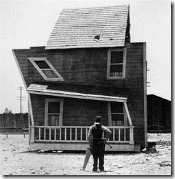 Comedy Short Subject Night, Niles Essanay Silent Film Museum, Saturday, 7:30.  One of these for shorts, Buster Keaton’s early “One Week,” would easily earn an A on its own. I haven’t seen Chaplin’s “One AM” in a very long time, and that was under very bad conditions, so I’m not sure how I’d react to that. I’m not familiar with the other shorts (“Saturday Afternoon” with Harry Langdon, and Laurel and Hardy’s “We Faw Down”), but if they’re half as funny as “One Week,” the evening will be worth it.

of chaos in feudal Japan. Beautiful, moving, and profoundly sad, it makes Shakespeare’s original seem upbeat by comparison. Unlike Shakespeare, Kurosawa considers what his king did before he became old, and it isn’t pretty. The film, on the other hand, is as visually gorgeous as movies get. Rialto Pictures struck a new 35mm print to celebrate Kurosawa’s 100th birthday and Ran’s 25th, and the PFA is showing that print as part of its summer-long Akira Kurosawa Centennial.

A+ Seven Samurai, VIZ Cinema, Friday through Sunday. If you think all action movies are mindless escapism, you need to set aside 3½ hours for

Kurosawa’s epic masterpiece. The basic story–a poor village hires warriors to defend them against bandits–has been retold many times since, but Kurosawa told it first and told it best. This is an action film with almost no action in the first two hours. But when the fighting finally arrives, you’re ready for it, knowing every detail of the people involved, the terrain to be fought over, and the class differences between the peasants and their hired swords. One of the greatest movies ever made. See my Kurosawa Diary entry. Part of Viz’s series, Samurai Saga Vol.2: Kurosawa on Sword Battles.

A+ Rashomon, VIZ Cinema, Saturday through Wednesday. I know that I’ve reviewed Kurosawa’s first period masterpiece–the film that opened Japanese cinema to the world. But according to a search of this blog, I’ve never reviewed it. How could I remember it one way, when the WordPress search engine remembers it differently? I could check Google, but what if its memory contradicts both? If you don’t understand what I’m talking about, you haven’t seen Rashomon, and that’s a real shame. For a more informative essay, read my Kurosawa Diary entry. Part of Viz’s series, Samurai Saga Vol.2: Kurosawa on Sword Battles.

A Yojimbo, VIZ Cinema, Monday, Tuesday, Thursday, and into next week.. A masterless samurai (always the

best for story-telling purposes) wanders into a small town torn apart by two gangs fighting a brutal turf war. Disgusted by everyone, our hero (who else but Toshiro Mifune) uses his wits and amazing swordsmanship to play the sides against each other. In the hands of Akira Kurosawa, the result is an entertaining action flick, a parody of westerns, and a nihilistic black comedy all rolled into one. Allegedly inspired by Dashiell Hammett’s novel Red Harvest, it was remade twice as Fistful of Dollars and Last Man Standing. Read my Kurosawa Diary entry. Part of Viz’s series, Samurai Saga Vol.2: Kurosawa on Sword Battles.

A Sanjuro, VIZ Cinema, Wednesday through next Monday. Yojimbo was such a huge hit that Kurosawa made a sequel. This time, Mifune’s masterless swordsman reluctantly 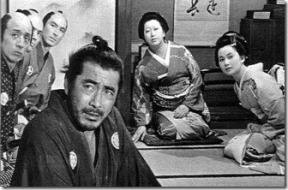 helps a group of naive young samurai clean up their clan. Of course, they insist on doing everything properly and honorably; without him, they wouldn’t last a minute. The result is an action comedy and genre parody that ties with The Hidden Fortress as Kurosawa’s lightest entertainment. The climax involves one of the greatest, and most unique, swordfights in movie history. See my Kurosawa Diary entry. Part of Viz’s series, Samurai Saga Vol.2: Kurosawa on Sword Battles.