Akira Kurosawa only made two sequels in his career, and only one after he reached his artistic maturity. Sanjuro didn’t start out as a sequel to Yojimbo, but as the earlier movie became box office dynamite, Kurosawa inserted the nameless main character from the first one into the center of his current screenplay. (Well, not quite nameless. In both films, when asked for his name, he dodges the question with an absurd answer that begins with “Sanjuro,” which can be loosely translated as thirty-something.)

Sanjuro doesn’t live up to its predecessor, but it offers enough excitement and laughs to qualify as a great entertainment. It’s one of Kurosawa’s least-ambitious works, running only 96 minutes (few of his post-Rashomon films run under two hours).

I don’t remember how many times I’ve seen this Movie. The first time, about 30 years ago, was on a double-bill with Yojimbo at Wheeler Auditorium. I’ve seen it several theatrically, although not in many years. I bought the original DVD (a really bad transfer—disappointing for Criterion), and eventually replaced it with the improved edition. Only budget issues keep me from upgrading it to the new Blu-ray. I watched the DVD on Thursday as part of my Kurosawa Diary project of seeing all of his films in chronological order. 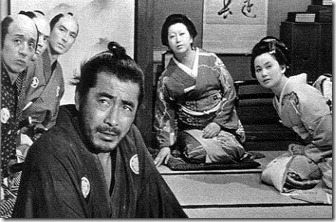 protagonist (Toshiro Mifune) takes pity on nine young, idealistic, but hopelessly naive samurai trying to clean up corruption in their clan. He’d rather be doing something else, but he knows that these guys would be soon dead if he didn’t intervene.

Much of the movie’s considerable humor comes from the young men’s incompetence and Sanjuro’s reaction to it. When sneaking through a garden, he orders them to follow him, resulting in what looks more than a Chinese dragon dance than ten warriors trying to not be seen.

Yet that same incompetence leads to one of Sanjuro’s more serious moments, when the hero has to kill several guards who he would just as soon have kept alive. Kurosawa takes an interesting view of the enemy soldiers. They’re not evil; they’ve been duped by the evil people taking over the clan.

One of those leaders, the only one smart enough, and skilled enough with a sword, to be a threat to Sanjuro, is played by Tatsuya Nakadai. He played a similar role in Yojimbo. He’s the center of the one scene in the movie that I really hate, where he confides to Mifune that his bosses or “rotten,” but that’s okay, because he’s rotten, too. Villains never think of themselves as villains, and the scene always played wrong to me.

Takako Irie plays a more interesting character, a middle-aged, high-born lady who remains calm under all circumstances. Her nobility includes an insistence on politeness to everyone. She thanks Sanjuro for saving her life, then gently admonishes him for his willingness to kill people. At first he thinks she’s crazy, but her words have an effect on him. This makes for interesting character development; the Sanjuro of Yojimbo felt no such guilt.

One thing I noticed this time around was Masaru Satô’s excellent musical score. I usually hate comedy music that tells you when to laugh, but here it worked. The dryness of the humor, and Satô’s refusal to overdo it, allowed the music to punctuate the comedy without getting annoying.

Next up in chronological order: High and Low. But before that, I’ll be going back in time to catch Sanshiro Sugata II at the Pacific Film Archive on Wednesday. I didn’t see it in its proper order because it wasn’t available at the time to be seen.