D- No real genre
Written and Directed by Radu Jude

Unfortunately, in the fiction of the movie, that video was caught on the husband’s smartphone, and somehow, it got onto the Internet. Emi, the woman in that couple (Katia Pascariu) is a teacher, and suddenly she’s in danger of losing her job. (We never see the husband again.) This is a Romanian film with English subtitles. 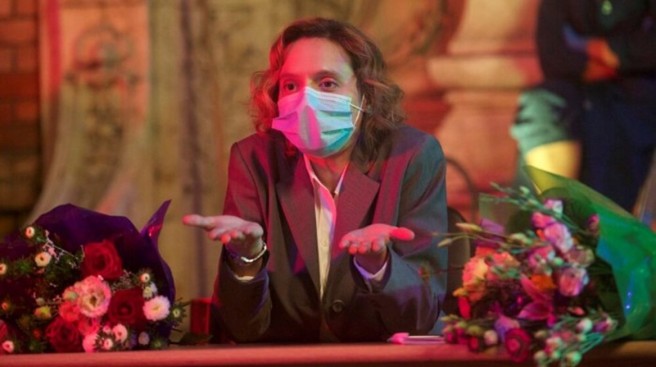 Then the movie becomes weird, as it splits into three sections. In the first part, we follow Emi as she shops and walks through Bucharest. Occasionally, she takes a phone call, sometimes about this problematic video. Writer/director Radu Jude and cinematographer Marius Panduru keep the camera a long distance from Emi, making it hard to tell how she’s responding. You never really get close to her physically or emotionally. At one point, the camera turns from her to studying rundown and badly kept buildings. All you know is that she’s a teacher with a serious problem.

Speaking of keeping distances, this is the first fiction film I’ve seen that acknowledged COVID-19. Most of the actors and extras are wearing masks. In one shot in a supermarket, a young man in line wears a Superman costume and a mask.

Between the film’s title, some of the music, and the bright-colored intertitles that separate the sections, the movie suggests that this is supposed to be a comedy. But I rarely laughed.

Filmmaker Radu Jude had something important to say. But you’ll have to wait for two thirds of the movie until it gets to what the film really wants to say. 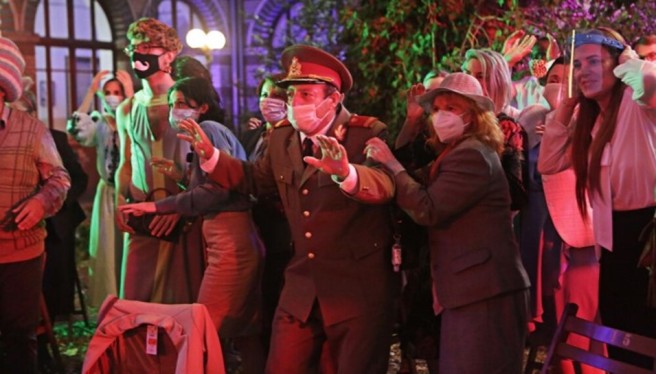 Bad Luck Banging‘s Bay Area opening will happen at the Roxie and Rafael on January 21.