Friday night, my wife and I attended a screening of the 1929 silent Soviet comedy, My Grandmother, with musical accompaniment by a little-known jazz duet called Gabe and Miles.

My Grandmother is a wild, surreal satire on Communist bureaucracy that’s often hilarious, occasionally redundant; and it’s a miracle that it exists. An intertitle tells us that all of a woman’s possessions came from the black market. People sleep at their desks, flirt, fly paper airplanes, and try to get a more prestigious job. People slide down and up banisters, a naked statue comes to life, and, unfortunately, one comic setup fails to provide the needed slapstick punchline.

You’re probably wondering how director Kote Mikaberidze got away with it. He didn’t. He spent two years in workcamps. My Grandmother was banned for decades.

Gabe and Miles, a duet of saxophone and electric guitar, played strange music that, for most of the time, sounded just the way this movie should sound.

How do you review a movie when it keeps changing? But then, Apocalypse Now hasn’t been a single film since the year 2000. Saturday night I attended a screening of the latest cut. This was part of the series Afterimage: Walter Murch in Conversation.

Even in the original, 1979 version of Apocalypse Now, you can see Francis Coppola’s talent melt away. His Vietnam War adaptation of Conrad’s Heart of Darkness goes off the rails in all three cuts. The original version is brilliant until Martin Sheen reaches his destination and the whole movie collapses under its (and Marlon Brando’s) weight. It’s still the best version and I give it an A-. But Coppola had footage he wanted people to see, so in the year 2000 came Apocalypse Now Redux. Basically, he lengthened the film by adding more bad scenes. I give it a B-. 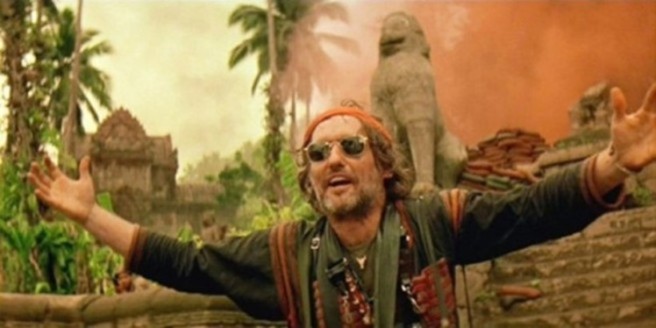 Last Saturday night, I saw the latest version, Apocalypse Now: Final Cut (I hope that’s a promise). It’s a considerably better film than Redux, but still not as good as the original. The biggest change, and the biggest problem, is the French plantation sequence (also in Redux but not in the first version). It’s just too ridiculous.

I realized something new when I watched the film Saturday night: The Do Lung Bridge sequence – my favorite scene in all three versions – was probably inspired by the bridge sequence in The Good, The Bad, and the Ugly.

After the film, sound designer and film editor Walter Murch, along with sound editor Pat Jackson, came up front to discuss the movie and the changes. A few comments: not exactly word for word.

In 1994, I wrote a parody of Apocalypse Now for a humor column I wrote for Computer Currents. If you remember the technology of the time, you might find it funny.