I hadn’t even heard of Pauli Murray until very recently. Either I’m the only person who missed one of the most important people of 20th-century America, or almost everyone else has missed her, too. Either way, documentarians Julie Cohen and Betsy West are trying to make people know about her through their new film, My Name Is Pauli Murray.

Anna Pauline “Pauli” Murray was an African-American scholar, lawyer, civil rights activist, professor, women’s rights activist, author, and Episcopal priest. She was also transgender – a word that didn’t exist when she died in 1985.

Should I refer to Murray as him rather than her in this article? I don’t think so. One of the film’s interview subjects prophesizes that in the future, Murray will be referred to as he. Murrey called herself she throughout her lifetime. Born in 1910, she could sometimes be conservative about words; she regularly used the word Negro (always with an uppercase-N) in a university Black History class she taught during the Black Power era.

Fifteen years before Rosa Parks sparked the Montgomery Bus Boycott, Murray and a friend refused to stay in the back of the bus and were arrested for the “crime.” They were only convicted for disorderly conduct. 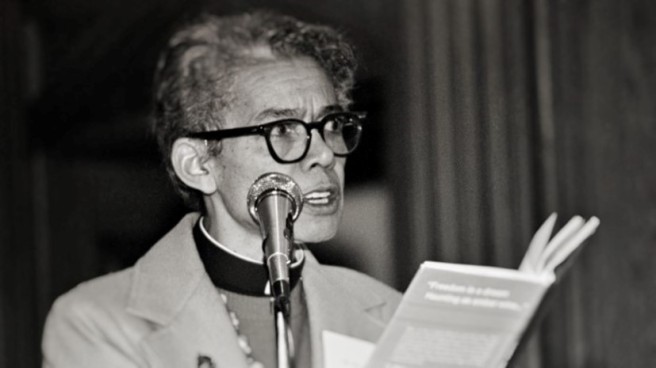 As a black woman, she spent most of her time being different from other students, teachers, and lawyers. Professionally she had to dress as a woman, but she preferred to dress like a man. She coined the term Jane Crow during the feminist revolution. The main romance in her life was Irene Barlow, who was white. While Murray wrote and taught, Barlow did the “women’s work” of the house.

You’ve probably noticed that I have been telling you a lot about the person Pauli Murray and almost nothing about the movie. That’s because there’s very little of interest about the documentary itself except its extremely fascinating subject. The film is mostly people – both those who knew her and those who studied her life – talking to the camera. We hear her voice occasionally from some recordings.

But I don’t understand why the film barely covers the civil rights struggles of the 1950s and ’60s. Certainly Pauli Murray and Martin Luther King, Jr. – both non-violent fighters for racial justice – should have come together and talked about the movement. The film doesn’t tell.