There’s a theme going through this list of theoretically random movies – they’re all listed at the bottom of my last Criterion article.

This is much more than an attack on 1950’s conformity. Gregory Peck stars as a father, husband, and breadwinner, and doing all that isn’t easy. The family is just getting by (even if the house looks very nice), and father must get out of his comfort zone to get a better-paying job. But other economic issues get in the way. To make life more difficult, he keeps remembering the horrors of World War Two. Jennifer Jones plays his wife, who tries to push him to that better job, while Fredric March is excellent as the boss who made a fortune but lost his daughter. Not surprising for a movie from the 1950’s, the film frequently reminds us of the evils of television.

I loved Luis Buñuel’s Oscar-winning satire when I first saw it almost 50 years later. But now it doesn’t work as well as it did then, and it isn’t that funny. Fernando Rey stars as a South American ambassador who smuggles heroin into Europe through his diplomatic pouch. He and his upper-class friends walk, talk, try to have sex, and most memorably, try to eat. I guess that kind of surrealism doesn’t work quite as well, anymore.

This noir thriller starts as a cheap version of The Best Years of Our Lives, with three veterans adjusting to civilian life. But then a cheating wife turns up murdered, and the movie becomes a conventional mystery. The hero (Alan Ladd) must stay away from the police because he’s the top suspect. Meanwhile, Veronica Lake pops up in too many coincidences to be believable. But it does have a wonderful cast, including Howard Da Silva and William Bendix as a veteran with a brain injury. 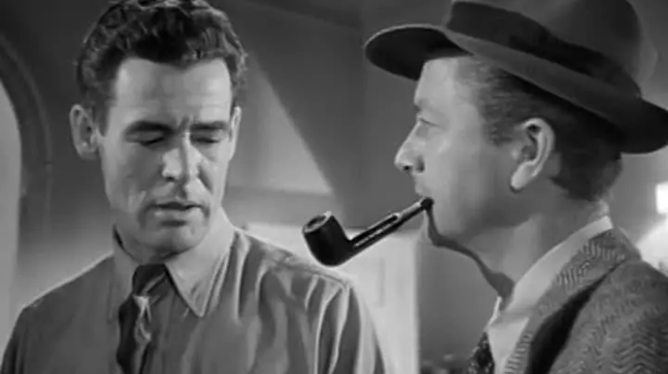 This cheap post-war noir detective story isn’t a particularly good movie, but is historically interesting in many ways. First, it’s probably the first Hollywood film to deal with American anti-Semitism (Gentleman’s Agreement came out four months later). The book it was based on, Richard Brooks’ novel, The Big Foxhole, was not about anti-Semitism but homosexuality – and sometimes you can feel it. It also provides good performances to four actors soon to become famous: Robert Young, Robert Mitchum, Robert Ryan, and (no Robert) Gloria Grahame.