DVDs and Blu-rays don’t last forever. But with good customer support, that shouldn’t be a major problem.

Early this month, I pulled my 8½ Blu-ray off the shelf to revisit the commentary track. But when I put the disc in the player, nothing happened. I tried another title; it played fine. I tried both discs on another player. Once again, 8½ couldn’t start, but the other disc had no problem.

I was so upset, I didn’t even think to watch the 8½ commentary via the Criterion Channel.

Without expecting good news, I visited Criterion.com and found the contact page, with an email address for these sorts of problems. So, I sent an email complaining about my dead disc. I expected nothing but a “We’re sorry” response or no response at all.

Yet on the next day, I got an email from a wonderful Criterion employee named Jill. Instead of “Sorry,” she told me that “8 1/2 is one of the titles of ours that might have been affected by disc rot.” She included two lists of discs that may have gone bad. And if they had gone bad, Criterion would replace them.

I discovered that I owned six Criterion Blu-rays on those lists. Jill asked me some questions about those discs. 8½ turned out to be the only one that didn’t work, but that didn’t mean it wasn’t the only one to worry about. Three others, The Seventh Seal, Monterey Pop, and Stagecoach, had turned bronze where the disc is supposed to be silver – a sign of rotted media. Two others on the lists, Days of Heaven and Paths of Glory, were still silver, and “should be fine and do not need to be replaced at this time.”

I emailed the results of my tests, and Jill gave me the address to send the four bad discs. My only cost was postage for mailing the bad discs. Five days after I first visited the Criterion website, the new discs were on their way. It took more than twice that time to actually get the discs, but that was Donald Trump’s fault. Starting from a Criterion facility in Kentucky, the package went to Cincinnati, Guam, and Honolulu before it got to my East Bay home.

I expected four discs, but I got four full packages – discs, booklets, and packaging. So, if you have any use for Criterion cases with booklets but no discs, let me know. 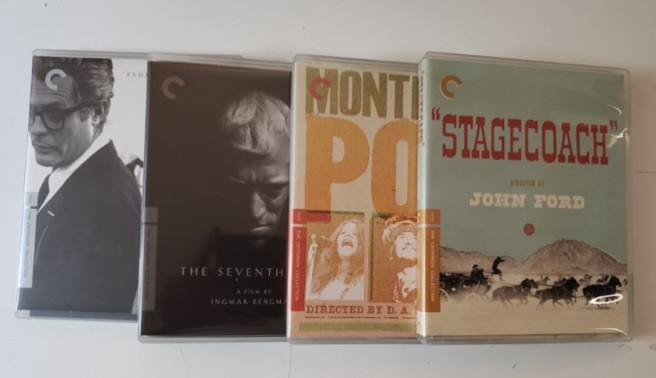 Overall, I was happily surprised by Criterion’s customer service.